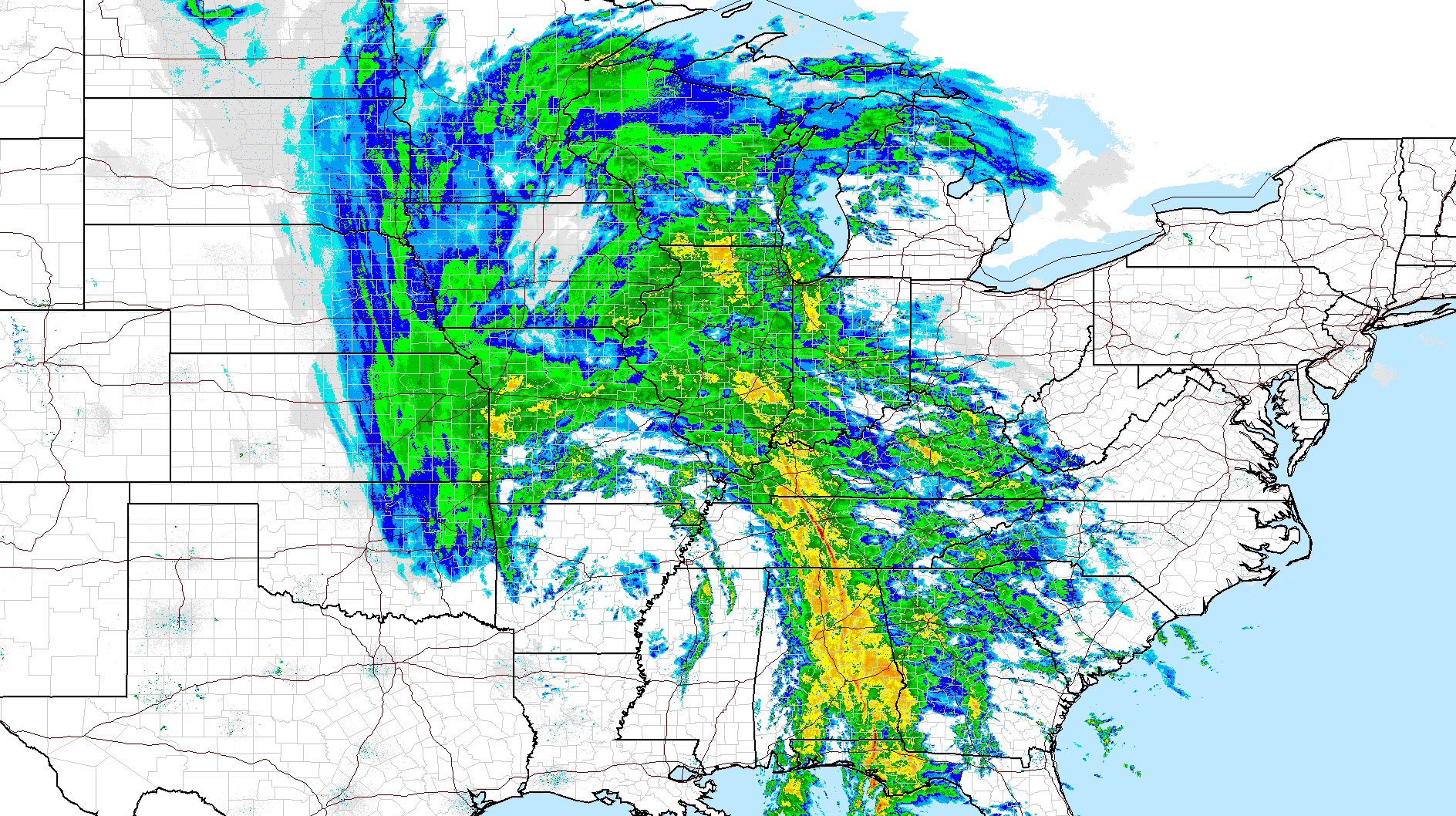 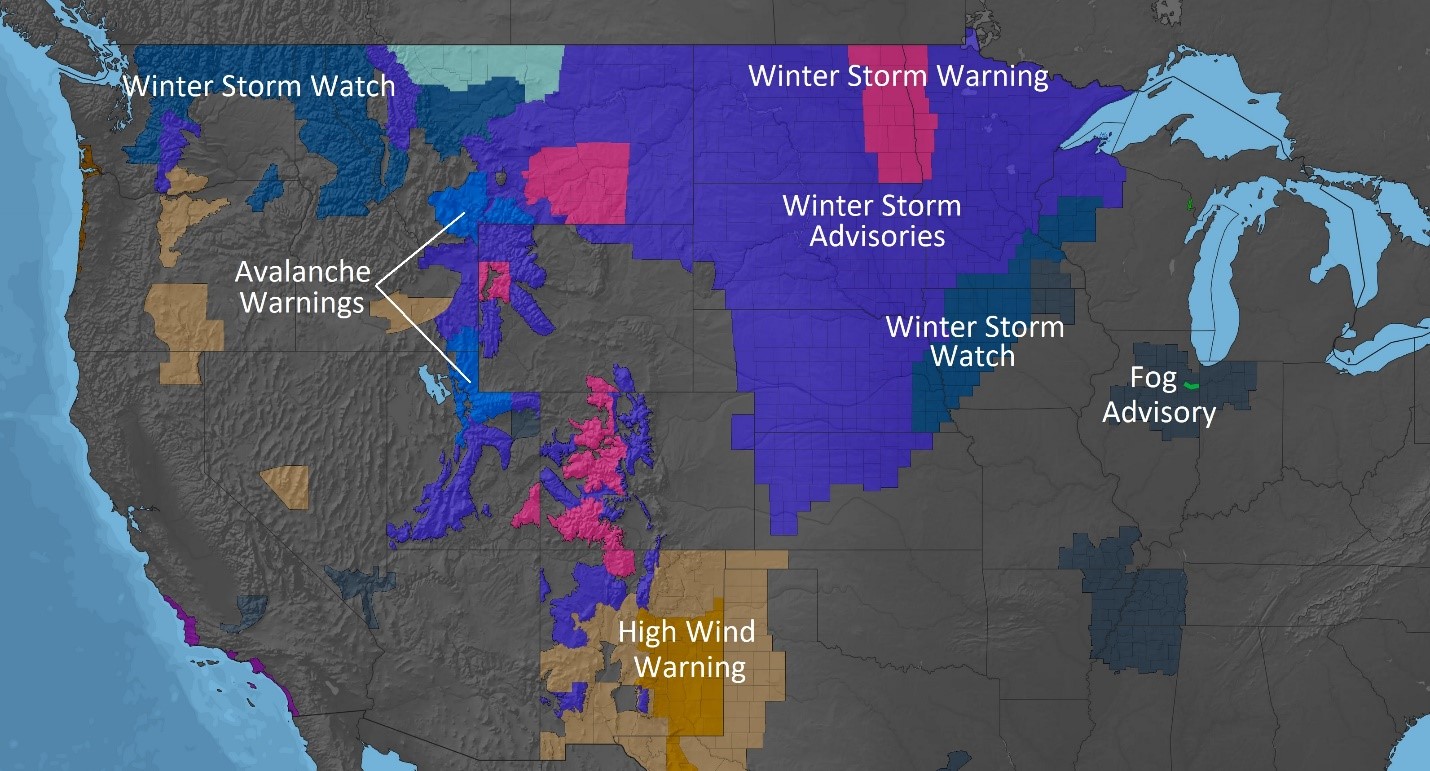 NOAA Advisory Types on the morning of January 10, 2018, highlighting a series of winter storms tracking across the central and western United States.

NOAA issues advisories; special alerts that instantly quantify risk to life and property at a given GPS location. At a glance, users can gauge threat levels and take necessary precautions. AerisWeather supports 120 different NOAA weather and civil advisories for the United States, with another 45 additional advisories issued by Environment Canada, because weather threats don’t stop at the U.S. border. Advisories can be categorized by type, creating a more manageable subset of the comprehensive master list, ie. flood advisories, wind-related advisories, fire-related advisories, etc. The advisory list is inclusive and comprehensive; everything from Avalanche Warnings and Ice Storm Warnings to Tornado Watches and Volcano Warnings is supported. All advisories have an expiration time, highlighting when a threat level is forecast to diminish to a point where danger has become minimal. 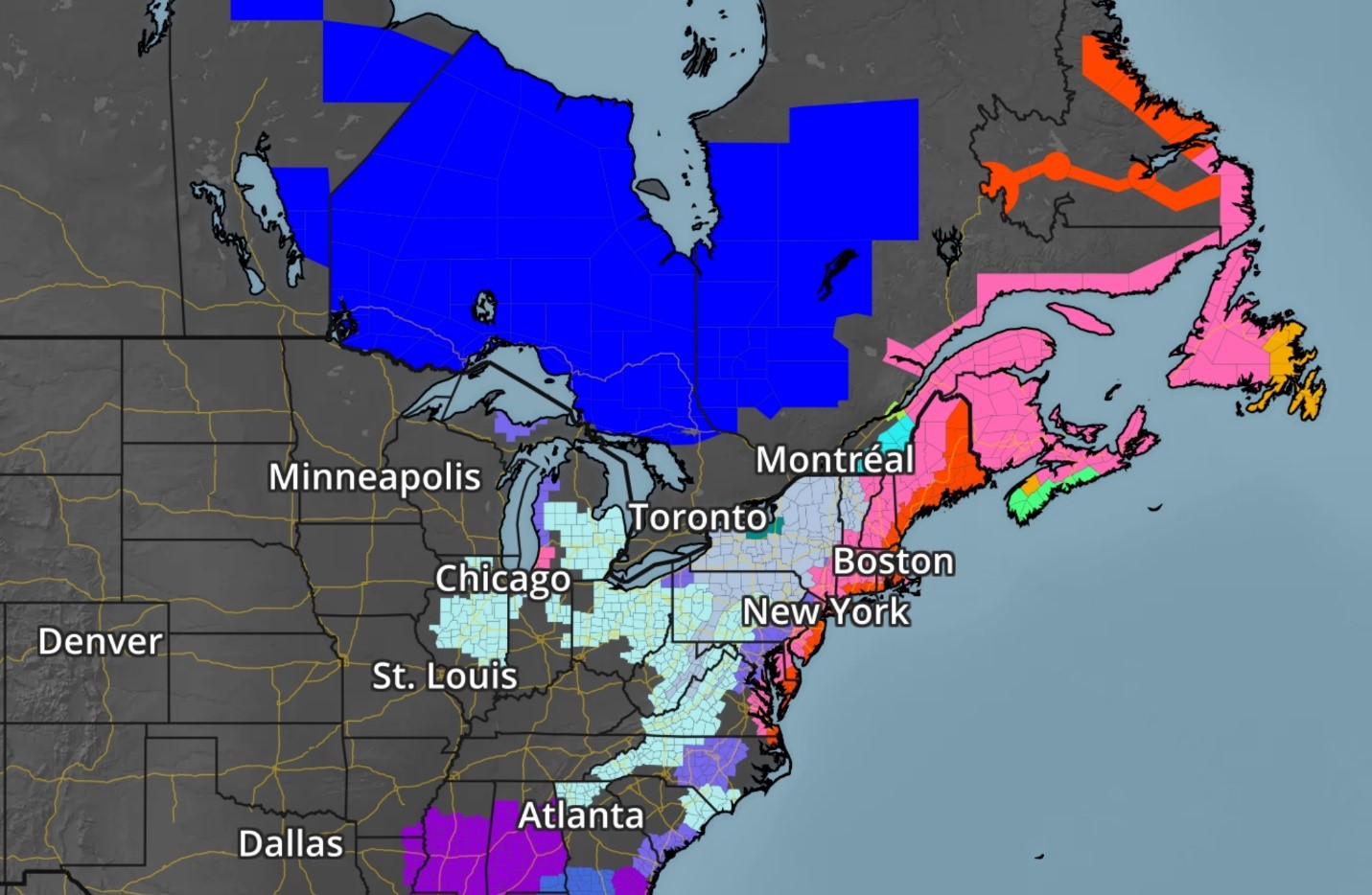 Environment Canada issues 45 different types of advisories for Canadian provinces from Newfoundland to British Columbia and The Yukon.

The One Thing Meteorologists Agree On. NOAA and Environment Canada are the only entities that issue advisories, which reduces potential confusion for consumers and business users alike. As a meteorologist I’m free to look at the data and models and issue my own forecast; I can make a prediction that differs from my competitors, or even the National Weather Service. But NOAA is the only U.S. agency that issues official advisories for threatening weather conditions, in any form. The alternative would be something close to severe weather anarchy. If every forecaster issued their own advisories, the result would be chaos, widespread confusion – and a much greater risk of subsequent weather injuries and fatalities. Research shows that when people receive conflicting information they are more likely to do nothing, and that could have potentially life-threatening consequences. AerisWeather Chief Technology Officer, Lee Huffman, has additional perspective. “Severe weather warnings have become more accurate with increased lead times. These advances have helped save lives and limit damage, although deaths still occur. Therefore, it’s important that we continue to improve severe weather warning communication and accuracy.” 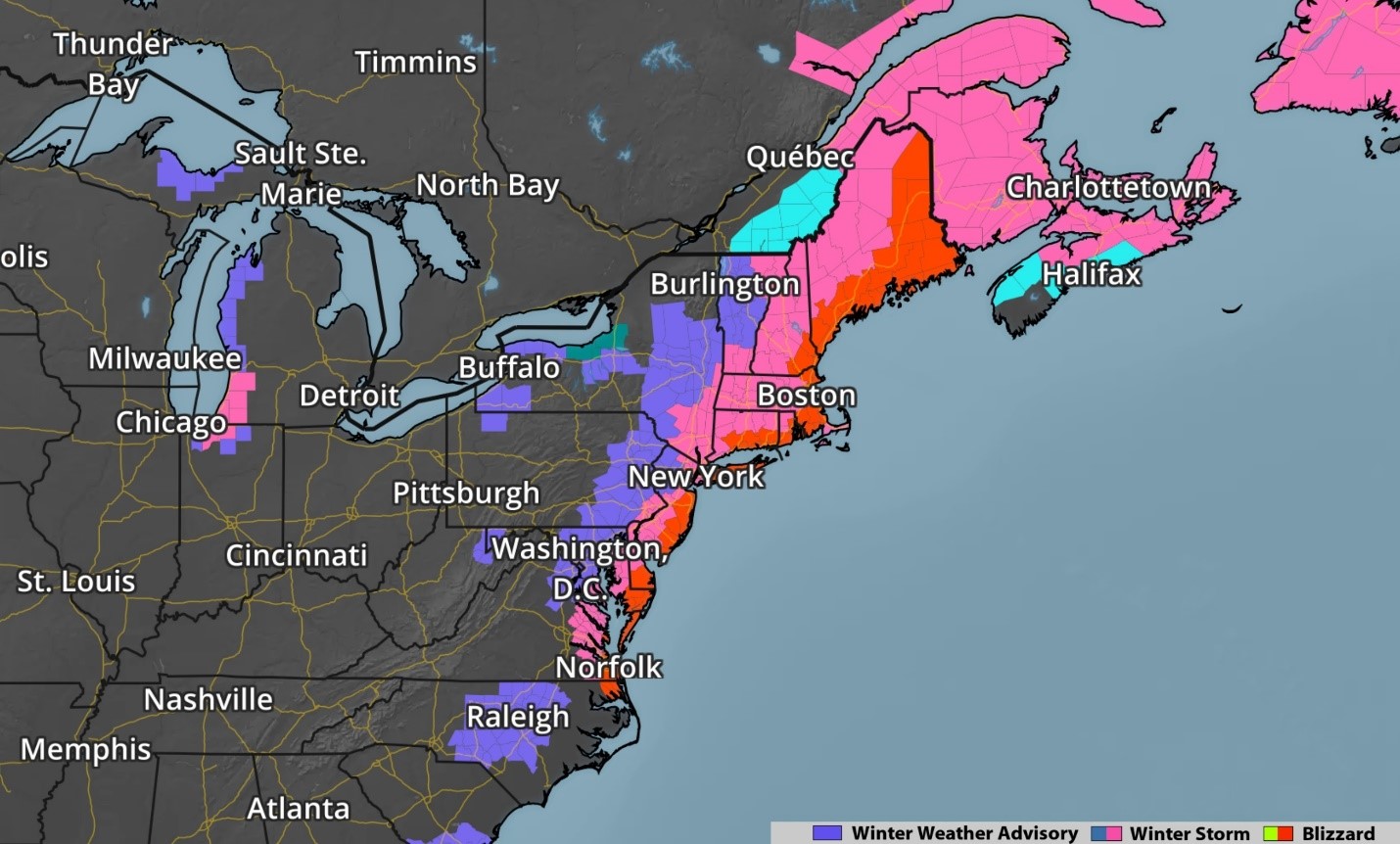 Not only are the location of alerts instructive in assessing risk, so are advisory trends over time. Have warnings been downgraded to watches or advisories in the last few hours? The overall threat level is receding as the storm moves away. Alerts help to set expectations and quantify inherent risk in a way few other meteorological tools can offer. Customization is key. During the January 2018 “bomb cyclone” impacting New England, AerisWeather meteorologists broke the advisories into 3 subgroups, to more clearly show the geographical risks posed by wind, snow and flooding. “The API can return every alert type that NOAA and Environment Canada issues, we do have some defaults in place for both the API and maps,” Huffman adds.

The tempo and intensity of severe weather is on the rise, nationwide. During 2017, the U.S. experienced 16 weather and climate disasters with losses exceeding $1 billion. Total costs were approximately $306 billion – a new U.S. annual record, according to NOAA. New times require new tools. Which advisories add value, which subset of alerts are mission critical for your specific needs? With AerisWeather you now have the power, flexibility and customization tools to be able to display weather threats in real time, on your terms. 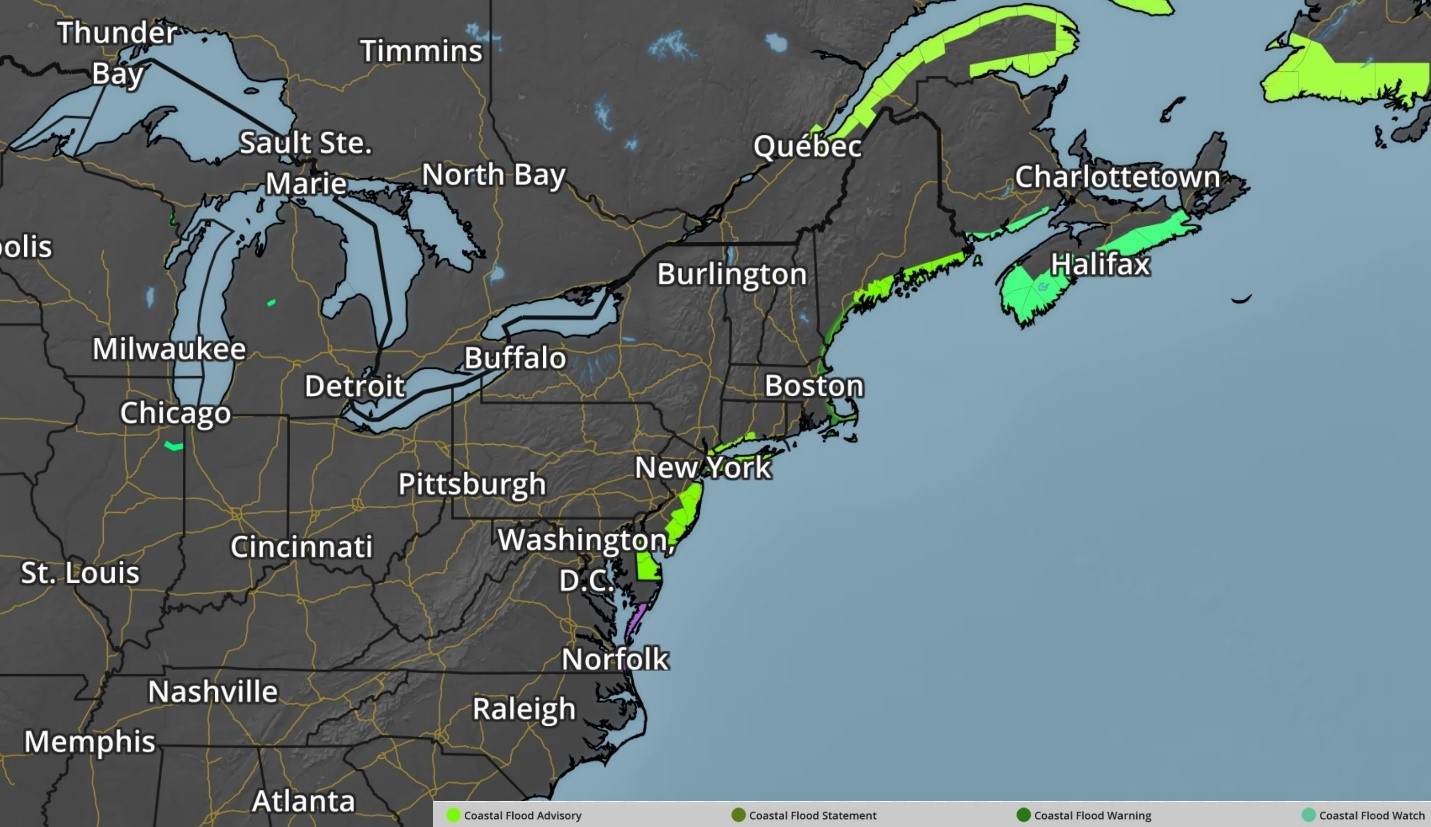 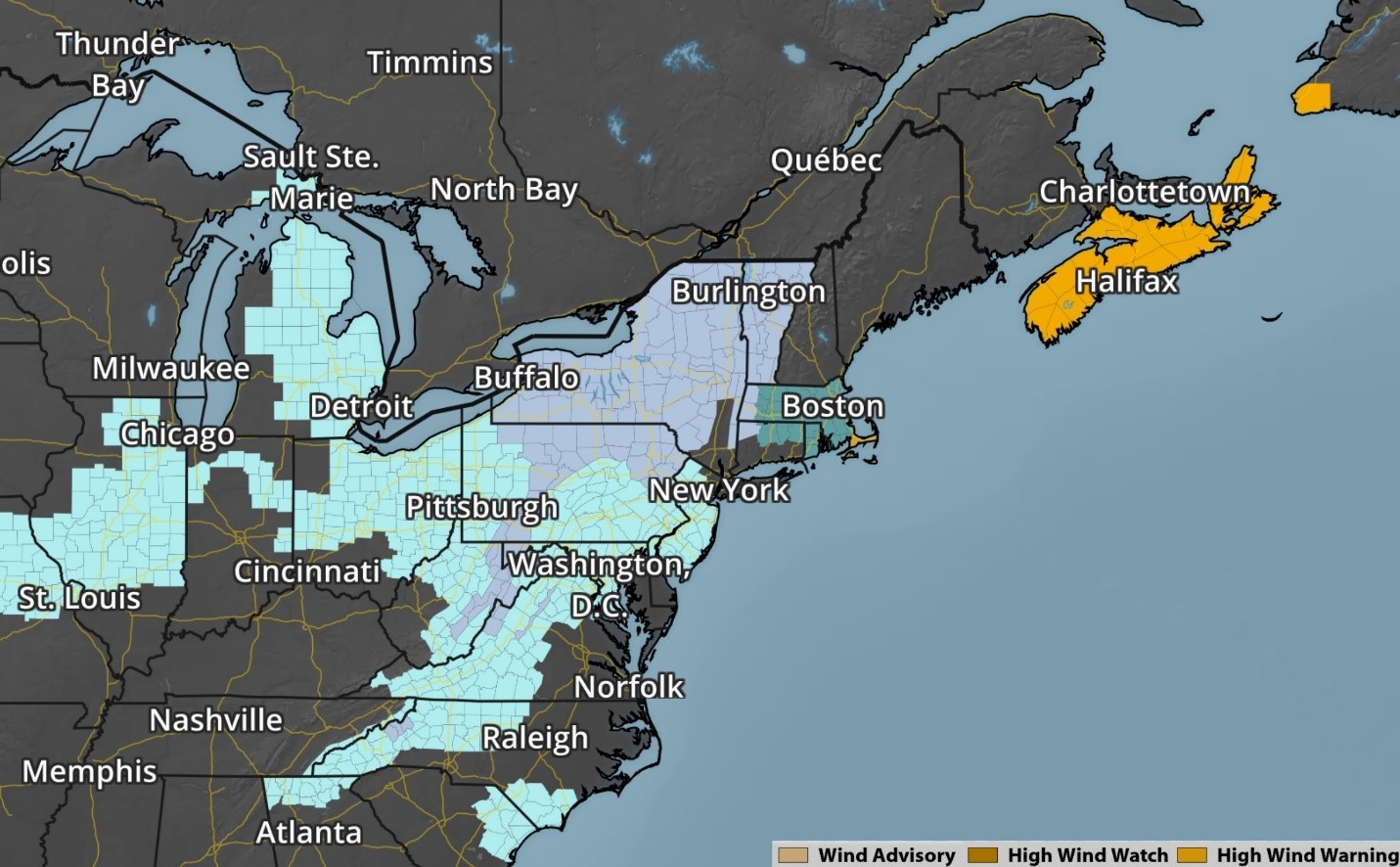