Three years ago we released version 2.0 of our AerisWeather iOS Weather SDK, which was completely rewritten from the ground up with massive improvements and tons of new features. We have numerous customers using the SDK in their own awesome weather apps in the AppStore, and we even rely on it with our own app AerisWeather Pulse.

Now, we’ve released the first public beta of the next major version of our iOS SDK, version 3.0!

Version 3.0 expands on all of the improvements and features we outlined in part one and part two of our 2.0 preview while making a lot of architectural and code improvements throughout the library.

Below we’ll give a summary of the biggest changes in version 3.0. Note that while much of the feature set and code are locked in for version 3.0, there may be minor changes during this public beta period. The release candidate release of 3.0 will occur sometime in early March.

Existing SDK User?
If you’ve been using version 2.0, review our migration guide for more in-depth information regarding these changes.

New SDK User? If you’re a new user of our iOS SDK and just getting started with version 3.0, be sure to also check our original part one and part two preview posts from version 2.0 as those core features are still available in 3.0. 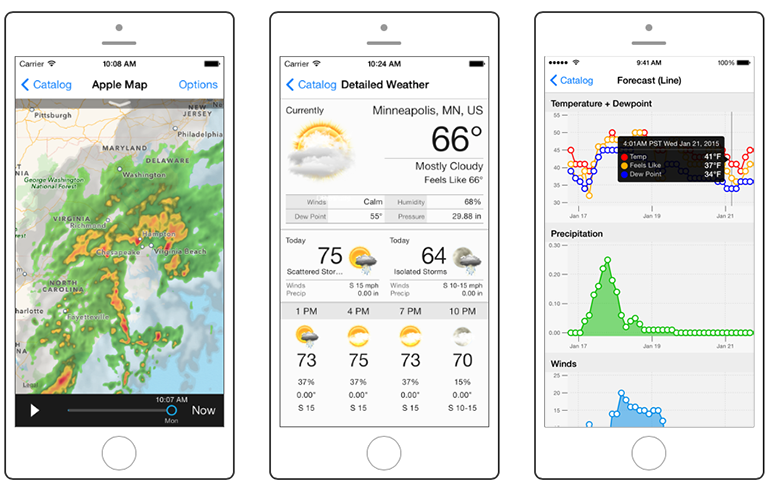 Version 3.0 now requires iOS 9.0 or higher and Xcode 8 or higher as the libraries are compiled as dynamic frameworks. We’ve also removed the library’s dependency on AFNetworking, so you no longer need to load in additional third-party dependencies when using our SDK. The structure of the frameworks has also changed, which you can find out more about in our 3.0 migration guide.

Also, if you’re an existing version 2.0 user and require the built-in weather views in your projects, you’ll definitely want to learn more about the removal of these built-in views from the core library in our 3.0 migration guide.

Our iOS SDK continues to be written in Objective-C since the original version, but Swift adoption has been increasing exponentially over the past couple of years. And while our frameworks have always worked with Swift projects, we realized it could be a lot better. Version 3.0 now has vastly improved Swift interoperability, such as proper nullability annotations, modified method naming for Swift, widespread usage of generics where applicable, string enumeration values and more.

Version 3.0 of the iOS SDK now supports the complete set of weather layers and features available with the AerisWeather Mapping Platform (AMP), such as adding layer modifiers, text values and/or image filters to specific layers. You can read more about these changes in our AMP usage guide.

We now support the full Mapbox GL SDK for iOS with version 3.0, meaning you can take advantage of Mapbox’s new mapping platform while still using data from our API and mapping services. Review our Mapbox SDK Support guide for more details on how to work with Mapbox using our SDK.

To get started with version 3.0, use your existing AerisWeather account or sign up for a FREE developer account. Then, review our usage documentation and download the example project that shows off many of the new features and changes with this release. This download also contains the core SDK files you will need to use within your own applications.

If you are migrating from the previous 2.0 version, make sure to review our migration guide to make your upgrade process a little smoother.

If you have any issues or feature suggestions with 3.0 of our AerisWeather SDK for iOS, feel free to contact us with them either through support or our Twitter account @AerisDeveloper.