The United States has experienced 25 separate 500-year floods since 2010, according to NOAA. During Hurricane Harvey, the town of Nederland, Texas received 64.58” of rain. By some accounts, Harvey unleashed a million gallons of water for every man, woman, and child in Texas. But it’s not just warm season rains falling with greater intensity. Blizzards are becoming supersized as well. Data shows extreme regional snowstorms were twice as common from 1961 to 2010 than from 1900 to 1960. 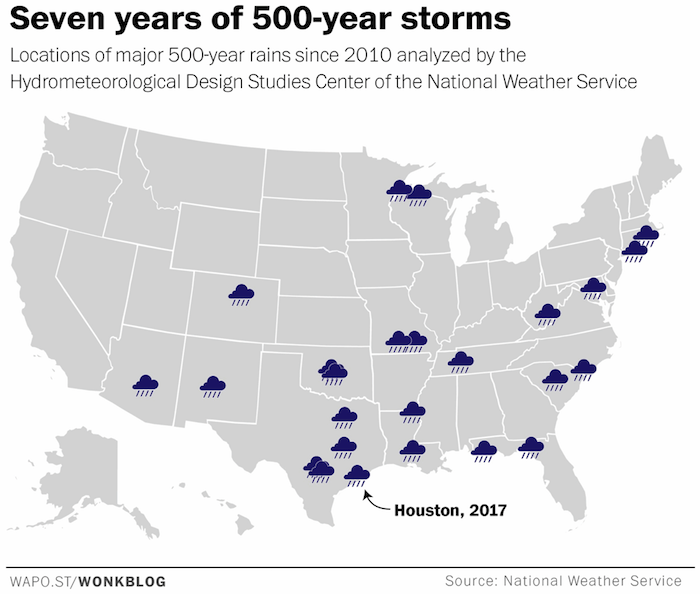 Location of 500-Year Floods Since 2010. Data from NOAA, map courtesy of The Washington Post.

Some, but not all, of the increase in natural disasters can be explained by population growth and more people living in harm’s way, including building in risky flood zones. But something else is in play. Climate volatility is resulting in more frequent and intense weather disruption, worldwide. Insurance companies in the United States report that weather-related losses have tripled since the 1980s, from an average of $10 billion to nearly $50 billion every year. From 1990 to 1999 there was an average of 6 emergency declarations issued each year, and from 2000 to 2009, there was an average of 15 issued every year. Nationwide, flash floods are the number one hazardous weather-related killer in the United States. 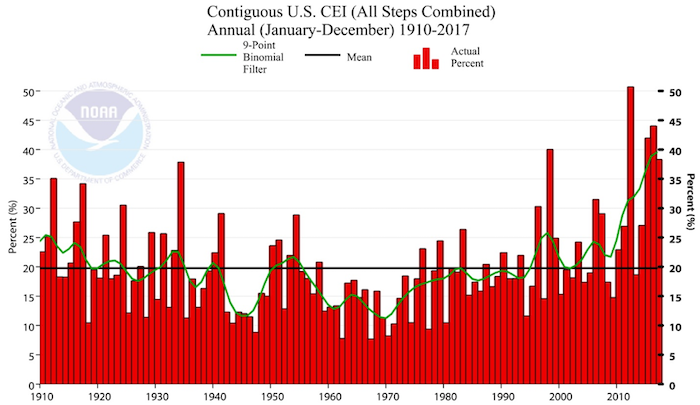 Climate Extreme Index from 1910 to 2015. The graphic above, courtesy of NOAA NCDC , shows the percentage of the Lower 48 states experiencing extreme flood or drought on a year by year basis.

In 2017 NOAA tallied 16 separate billion-dollar floods, fires and storms; tying the all-time record set in 2011. That compares to an average of about 6 a year since 1980. Millions of Americans were impacted. The U.S. has sustained 219 weather and climate disasters since 1980 where overall damages/costs reached or exceeded $1 billion (including CPI adjustment to 2017). The total cost of these 219 events exceeds $1.5 trillion. This total now includes the initial cost estimates for Hurricanes Harvey, Irma, and Maria.

It’s not just the United States. The frequency and intensity of weather extremes appear to be increasing, worldwide. Flooding caused most of the global disasters between 1994 and 2013, accounting for 43 percent of all recorded events, affecting nearly 2.5 billion people. 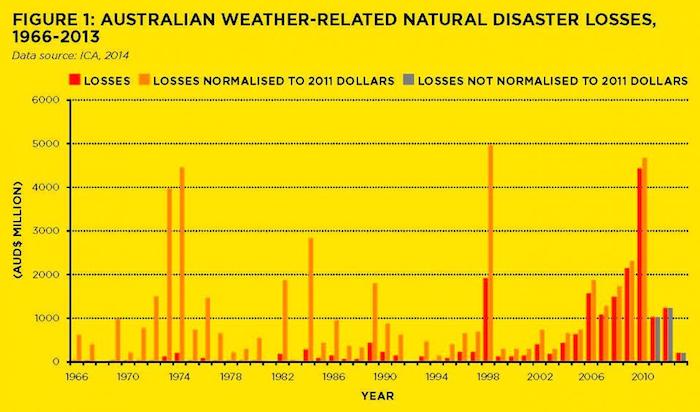 With rising CO2 levels in a warming world, we’re not about to change the weather – or slow the rate of severe weather events in the short term. But we can take steps to leverage severe weather data, making information streams reliable, hyper-relevant and actionable. AerisWeather’s weather API provides powerful endpoints that take severe weather monitoring to the next level. From multiple lightning options to severe storm reports, and tracking hail and tornado potential on a cell-by-cell basis, the options to personalize applications are nearly infinite. AerisWeather’s weather mapping platform (AMP) provides high-resolution mapping options that display the severe weather story quickly and accurately for your areas of interest, maximizing utility and user retention. Optimize your business or application with next-generation data and graphics that add value, providing another essential level of safety for employees and customers.

The weather is increasingly extreme. Your weather provider should be nothing less.

Check out our documentation for our severe weather API endpoints, and AMP weather mapping layers.
If you have questions contact our Sales or Technical Support Team.