“Thunder is good, thunder is impressive; but it is lightning that does the work.”

The title of this post is a quote by Mark Twain.

Most of us have had a close call with lightning, and no wonder. Cloud to ground lightning strikes the United States 25 million times every year. According to NOAA, an average of 47 Americans are struck and killed by lightning annually – deadlier than tornadoes and hurricanes many years. 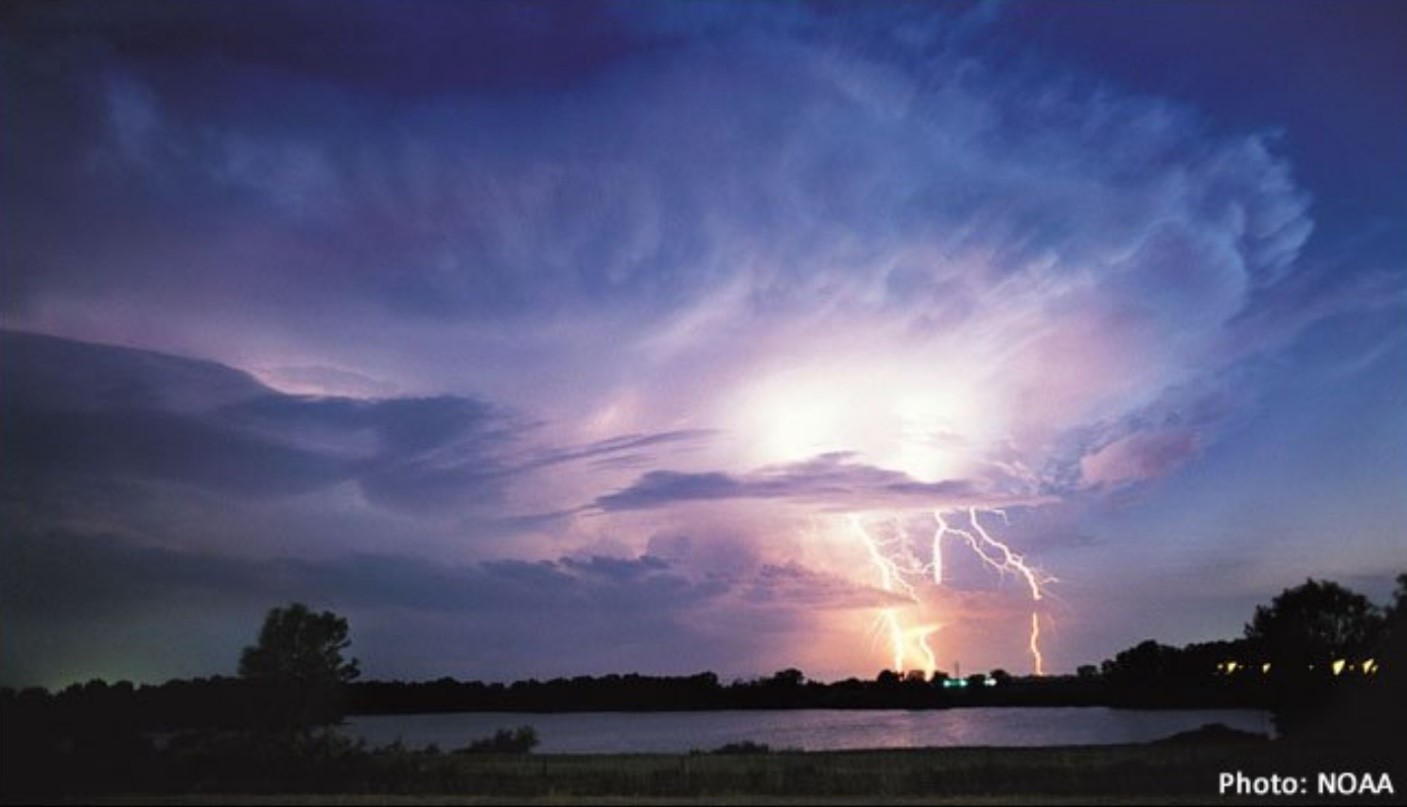 Lightning is terrifying and vaguely mysterious – scientists don’t begin to have all the answers. But it serves a purpose in nature. These crackling electrostatic discharges strike Earth approximately 50 times a second – roughly 1.4 billion flashes every year – recharging the planet’s global battery by keeping the ground flush with negative electric charge, while maintaining the ionosphere’s positive charge. Lightning turns the Earth into one great big electrical circuit.

Here’s what we know: for a few milliseconds, lightning heats a pencil-thin channel of air to roughly 53,000 degrees F, about 5 times hotter than the surface of the sun. The resulting shockwave of super-heated air expands outward, compressing air into the rolling roar of thunder we hear on the ground, traveling at the speed of sound – covering one mile every 5 seconds. 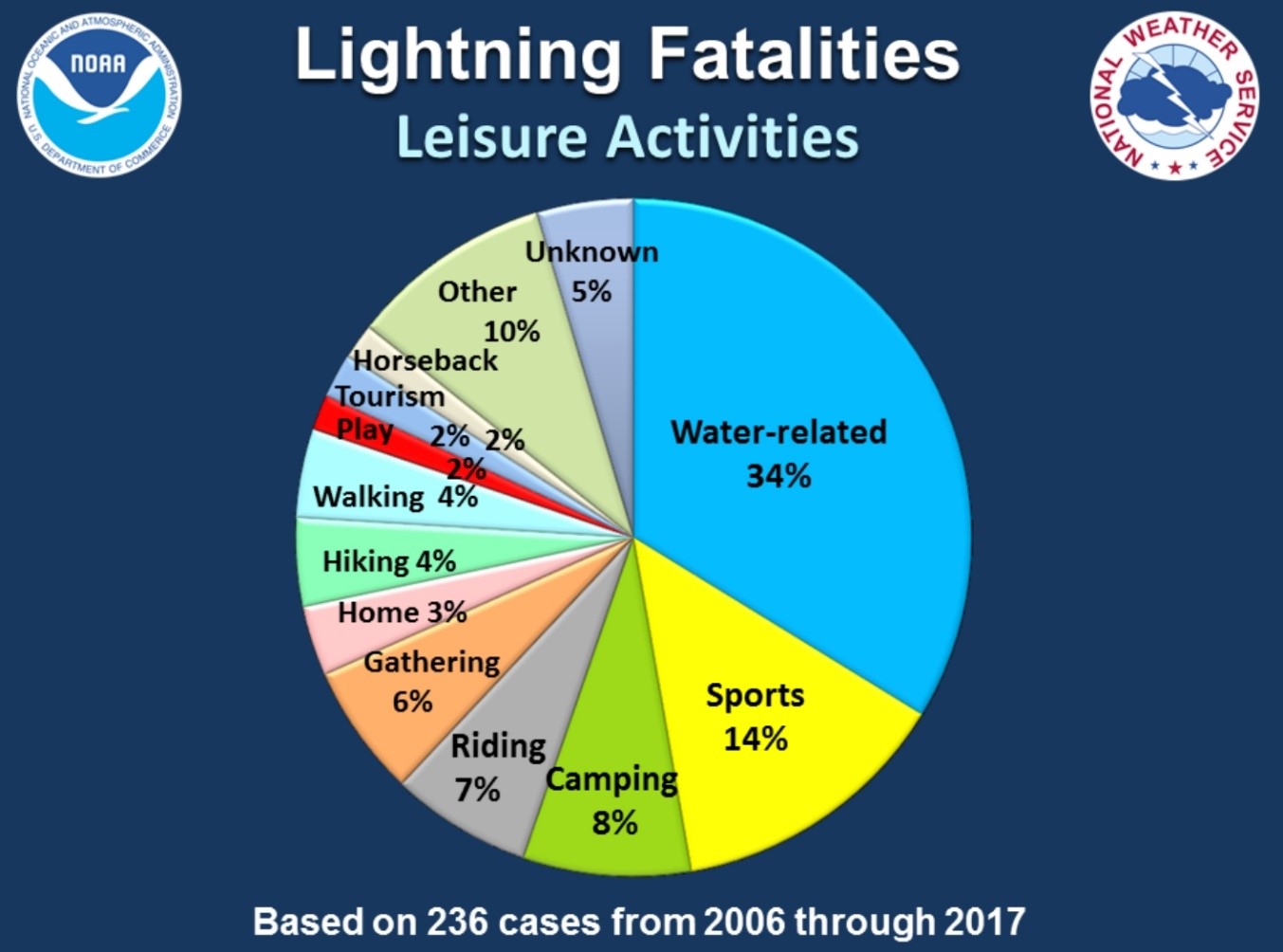 Lightning Risk. According to NOAA summer is the most dangerous season for lightning, with most fatalities occurring in June, July and August. 2 out of 3 lightning deaths occur during outdoor activities, especially water sports. Men are nearly 6 times more likely to be struck than women, probably because more men work (and play) outdoors. 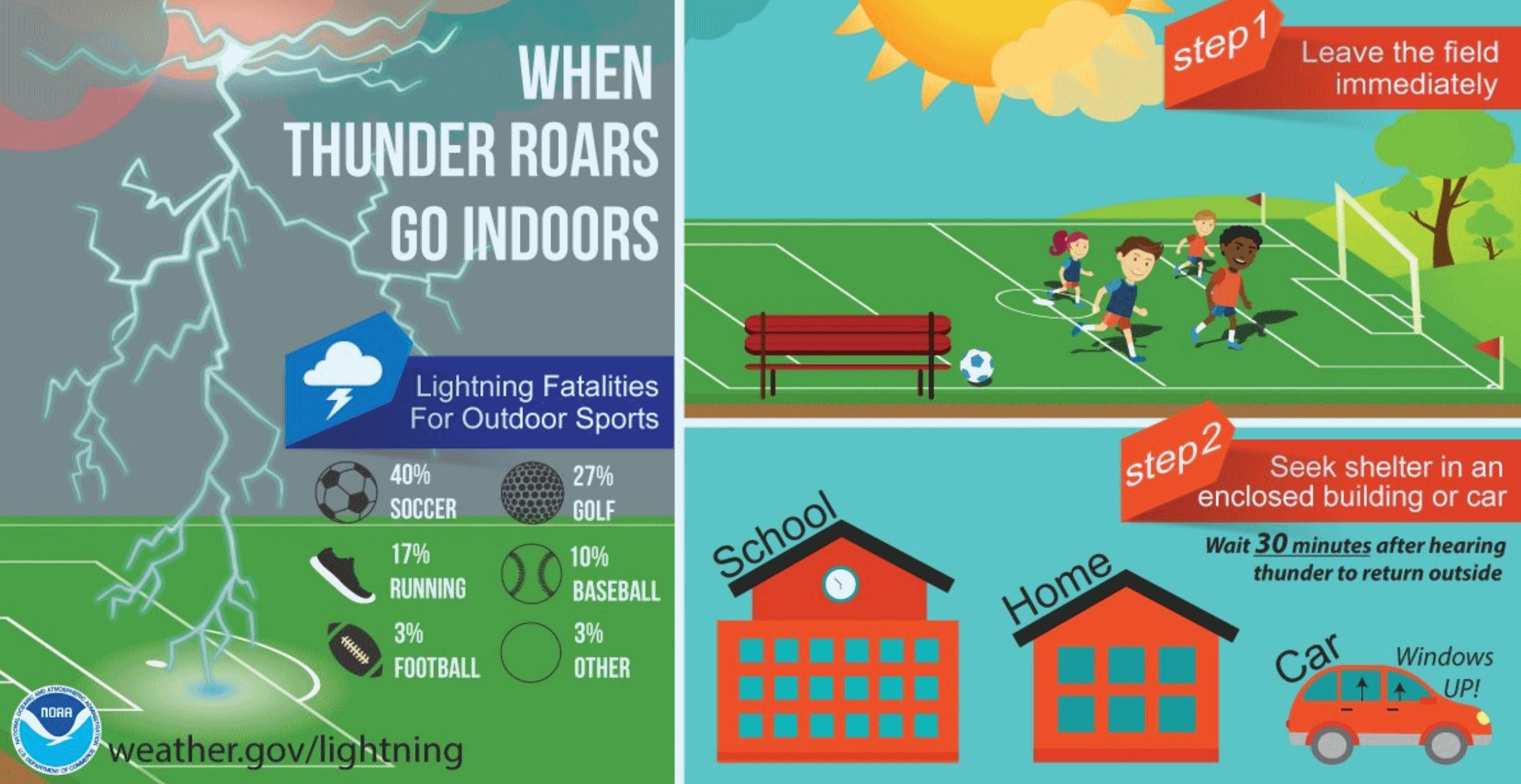 Lowering Lightning Risk. Lightning is lazy – it tends to favor the most direct path from cloud to ground. Which means you don’t want to be the tallest thing in the area when a thunderstorm approaches. Farm fields, lakes, shorelines and golf courses are especially vulnerable when lightning flickers overhead. Your safest option: any kind of structure, or even a vehicle.

You can take further steps to reduce the odds of being struck. Safety experts employ a “30-30 Rule” to lower risk, because a disproportionate number of lightning injuries and deaths occur at the beginning or tail-end of a storm. If you can count 30 seconds from the flash of lightning to the bang of thunder – it’s time to move indoors, well away from outer walls, windows and electronics. Then, wait at least 30 minutes after the last thunderclap to safely resume outdoor activities. 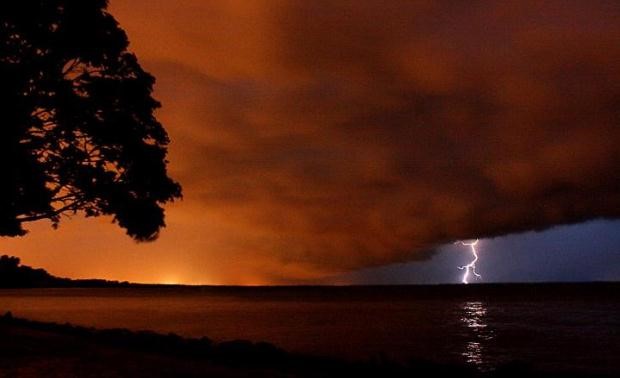 What about “heat lightning”? There’s no such thing. At night, when atmospheric conditions are favorable, it’s possible to see the distant flicker of thunderstorms hundreds of miles away. But thunder is rarely audible more than 10 miles from a strike. And just because it’s not raining doesn’t mean you can’t be struck. 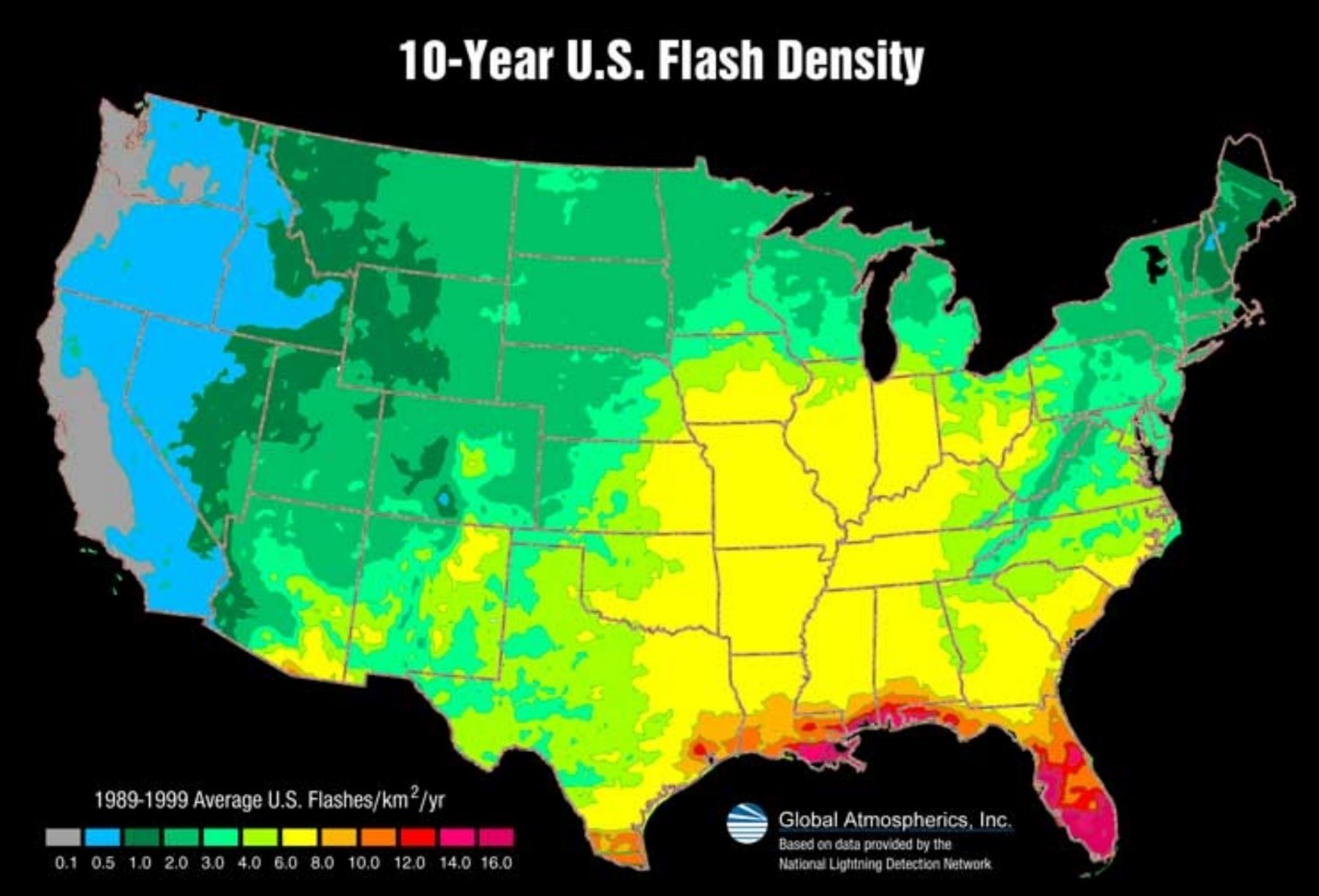 Lightning Alley. Lightning is rare along the west coast of the USA, but a pervasive threat for the Gulf Coast and Florida, the undisputed “Lightning Capital of the USA”. Many cities in the Sunshine State experience well over 100 days every year with lightning in the area.

Global Lightning Frequency. The map above is from NASA’s Optical Transient Detector and Lightning Imaging Sensor, showing the number of lightning strikes from 1995 to 2003. The most lightning on the planet takes place in central Africa, with over 70 flashes/km2/yr. Only the polar regions are immune from lightning activity. 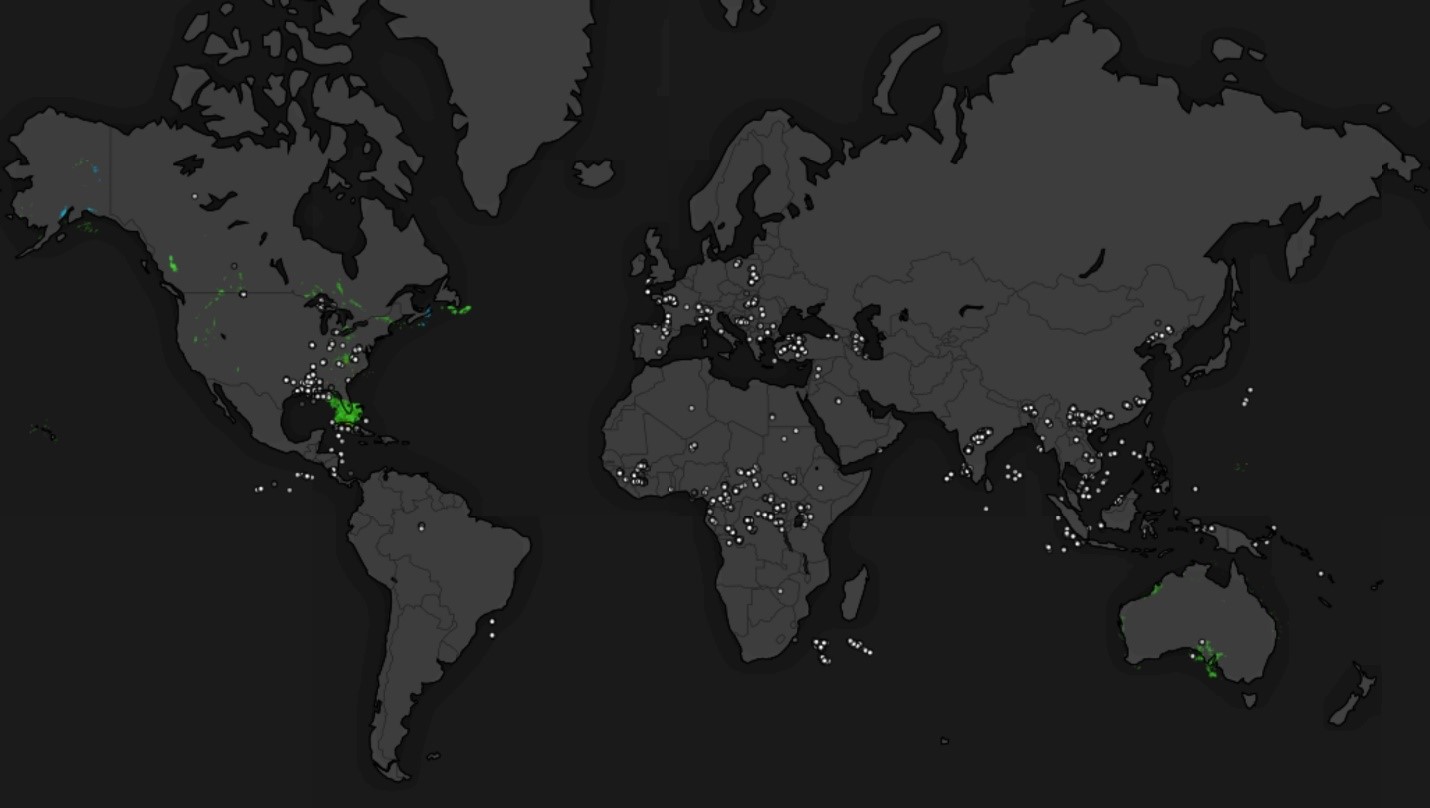 Global Lightning Disruption. Numerous industries are consistently impacted by lightning, including agriculture, insurance, utilities, transportation sectors and outdoor recreation. The AerisWeather 15-minute Global Lightning Weather-API takes the mystery out of lightning. The goal: lowering risk, enhancing customer safety and optimizing business operations – knowing precisely where lightning is being reported now, and what assets are in the line of fire. 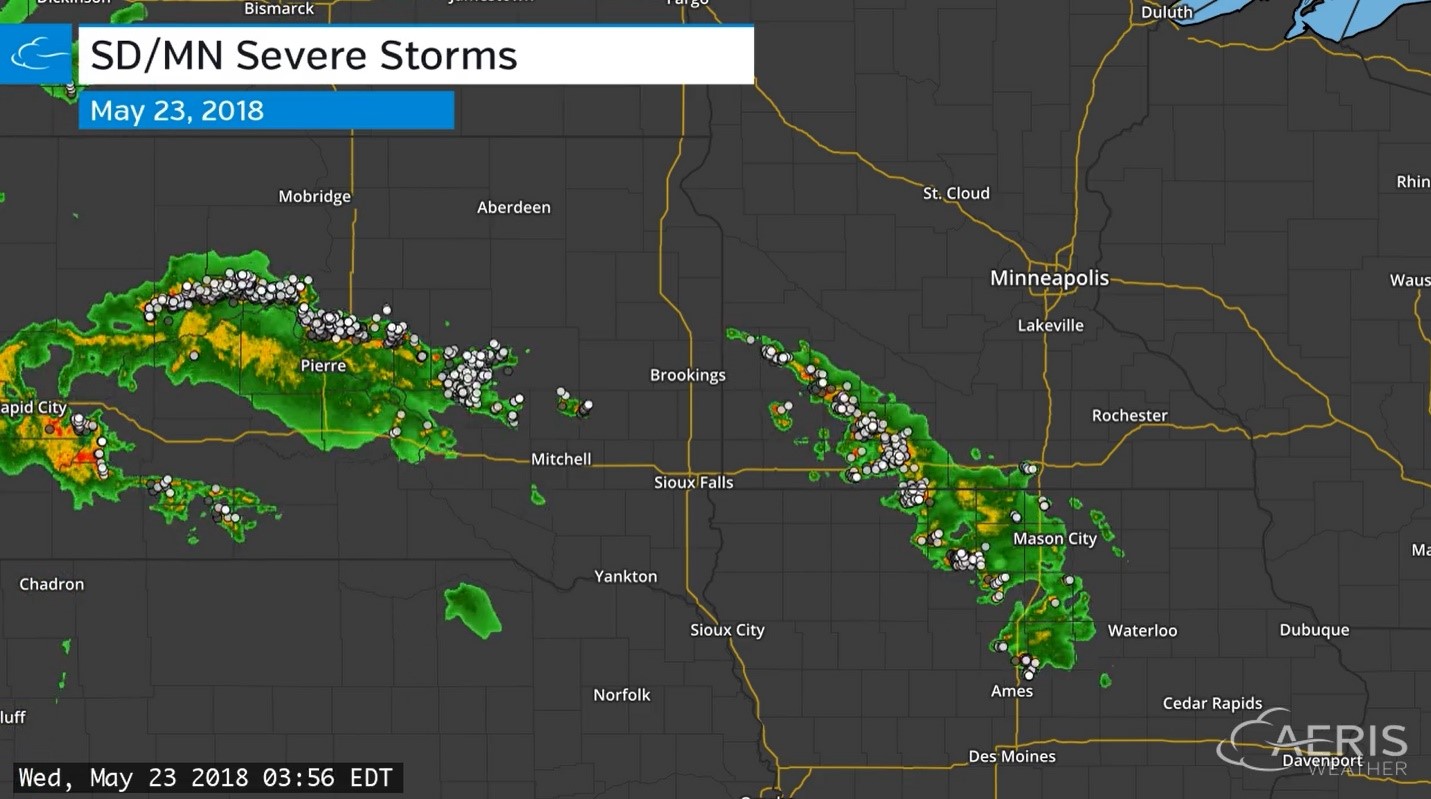 AerisWeather customers leverage the power of lightning alerting and notifications to optimize their businesses and improve safety margins for staff and customers. Wind turbines are especially vulnerable. Tapping the Aeris Lightning API, crews can be safely dispatched to turbines for maintenance and repair.  Dispatchers monitor maps of crew locations, superimposed with real-time weather threats.  Mobile mapping options allow crews to track lightning threats, anytime, anywhere. Proprietary lightning alerts notify crew members that severe weather with lightning is heading their way, and it’s time to vacate the area. The use cases are endless. One client taps the power of lightning alerting systems and notifications for schools and golf courses. Additionally, “ScoutLook” integrates lightning data to allow anglers to track strikes and make smarter decisions about when to get off their favorite lakes.

Is your business doing everything in its power to integrate lightning data and lower risk? We have yet to invent a technology capable of stopping a debilitating lightning strike. But with the right weather data provider you can fine-tune operations to run smoother and safer – minimizing the risk of any surprising bolts from the blue.