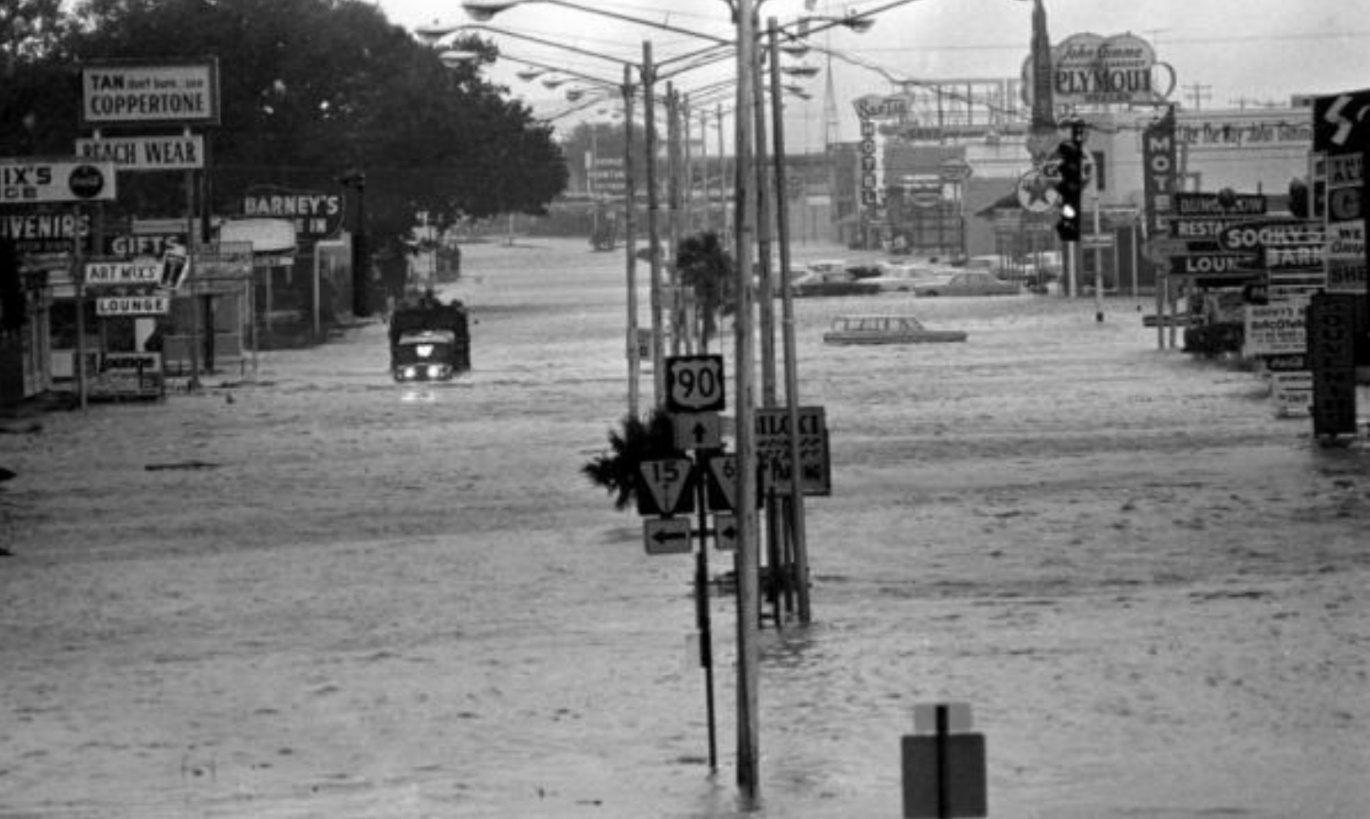 Flooding Frequency and Intensity are Increasing – Are You Factoring the Latest Trends?

A tropical storm named “Agnes” flooded my home in Lancaster, Pennsylvania in 1972; a traumatic event that ultimately led me to pursue a degree in meteorology at nearby Penn State. Many of us have a flood-related story or close encounter, and rising water is impacting more Americans with every passing year. There is precedent for concern: according to NOAA only extreme heat has claimed more American lives over the last 30 years.

In fact, flooding is the costliest natural disaster in the United States. It accounted for more than $268 billion in damage in 2017, a number that has risen steadily over the past two decades, and it affects the entire country, including areas well inland. Every state has experienced at least two major floods in the past 10 years.[i]

According to Pew Charitable Trust, flood-related events, including hurricanes, severe storms and downpours accounted for 7 out of 10 presidential disaster declarations in the United States over the last decade. 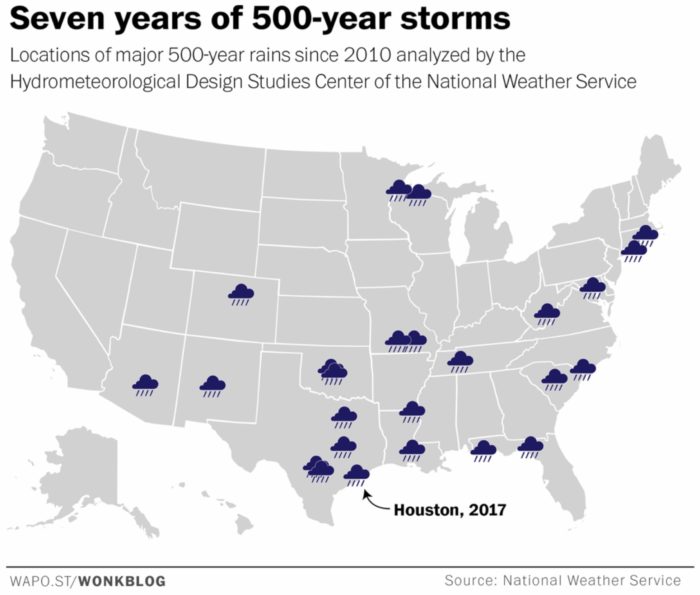 500-Year Flood Events. The frequency and intensity of extreme flooding events is on the rise. A warmer atmosphere has resulted in a 7% increase in water vapor floating overhead, jet fuel for developing storms. From 2010 to 2017 NOAA reported 25 separate 500-year flooding events, nationwide. Historical flooding is now being reported well away from traditional rivers and streams; “inland drainage flooding” impacting people and businesses who never thought they’d need flood insurance. Increasingly, our floods are becoming super-sized. 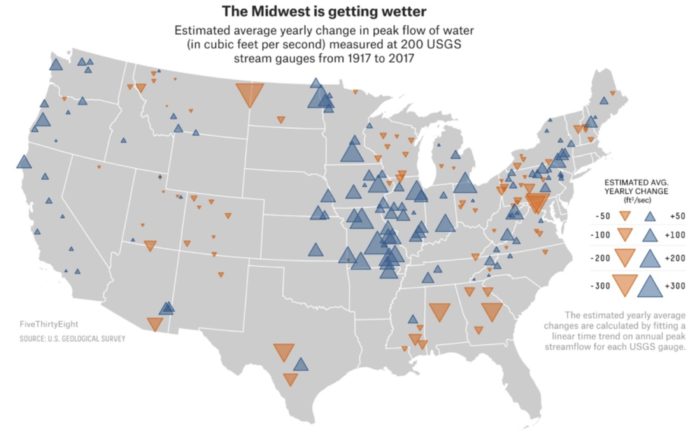 A Spike in River Flooding. Data from USGS show an increase in river flooding since 1917, centered on the Midwest, where tributaries are spilling over their banks 2 to 3 times more often than they did a century ago. Over the past century, the US has witnessed a 20 percent increase in the amount of precipitation falling in the heaviest downpours. Map: Pew Charitable Trust.

Flood Claims. The insurance industry is feeling the effects. As Homeowners insurance policies don’t routinely cover flood-related damage, a separate policy from the National Flood Insurance Program is required, and premiums have risen – an average of 8% in 2018 to reflect an observed. And this risk is not isolated to the coasts, as the US has 3.5 million miles of rivers and streams and 95,000 miles of shoreline, which translates into a pervasive flooding risk from coast to coast. 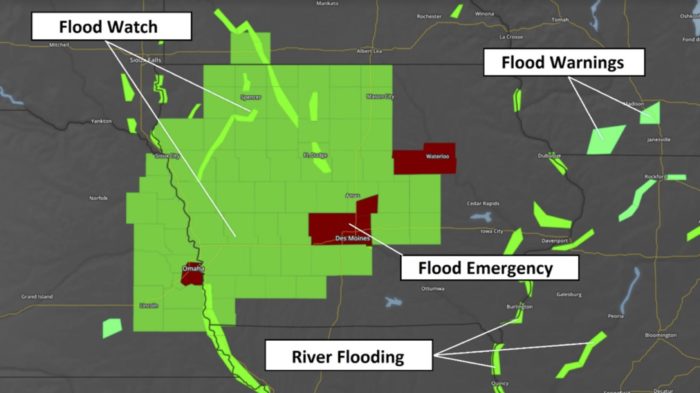 Flooding Dashboard. Today, businesses are turning to AerisWeather environmental data streams and imagery to optimize their operations and manage risk to staff, customers and facilities. By integrating flood-related API endpoints, companies can pull the very latest flood information into a variety of applications, including emergency management and supply chain dashboards, while visualizing – in real time – emerging flood threats in time to take proactive & evasive actions. 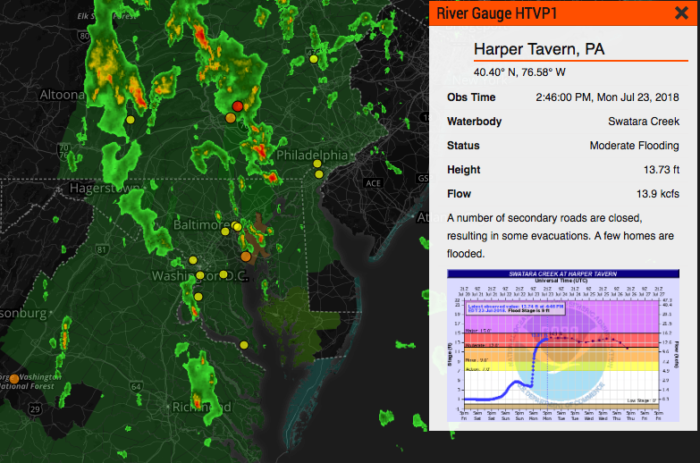 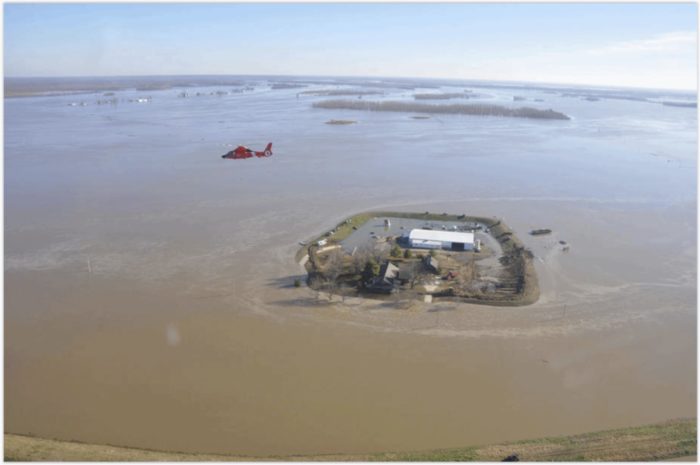 Flooding is on the increase – nationwide. Media reports, web sites and weather apps won’t provide the weather intelligence or level of granularity and reliability you need to make smart decisions around employee safety and operations.

New times require new tools. AerisWeather has a customized, cost-effective solution for your specific needs and goals. Contact us today to discover how integrating AerisWeather’s flood awareness data streams and visualizations can provide value for your business or application.

Because anything else… is yesterday’s weather.

– Check out our API documentation and AMP Layers.
– If you have questions contact our Sales or Technical Support Team.