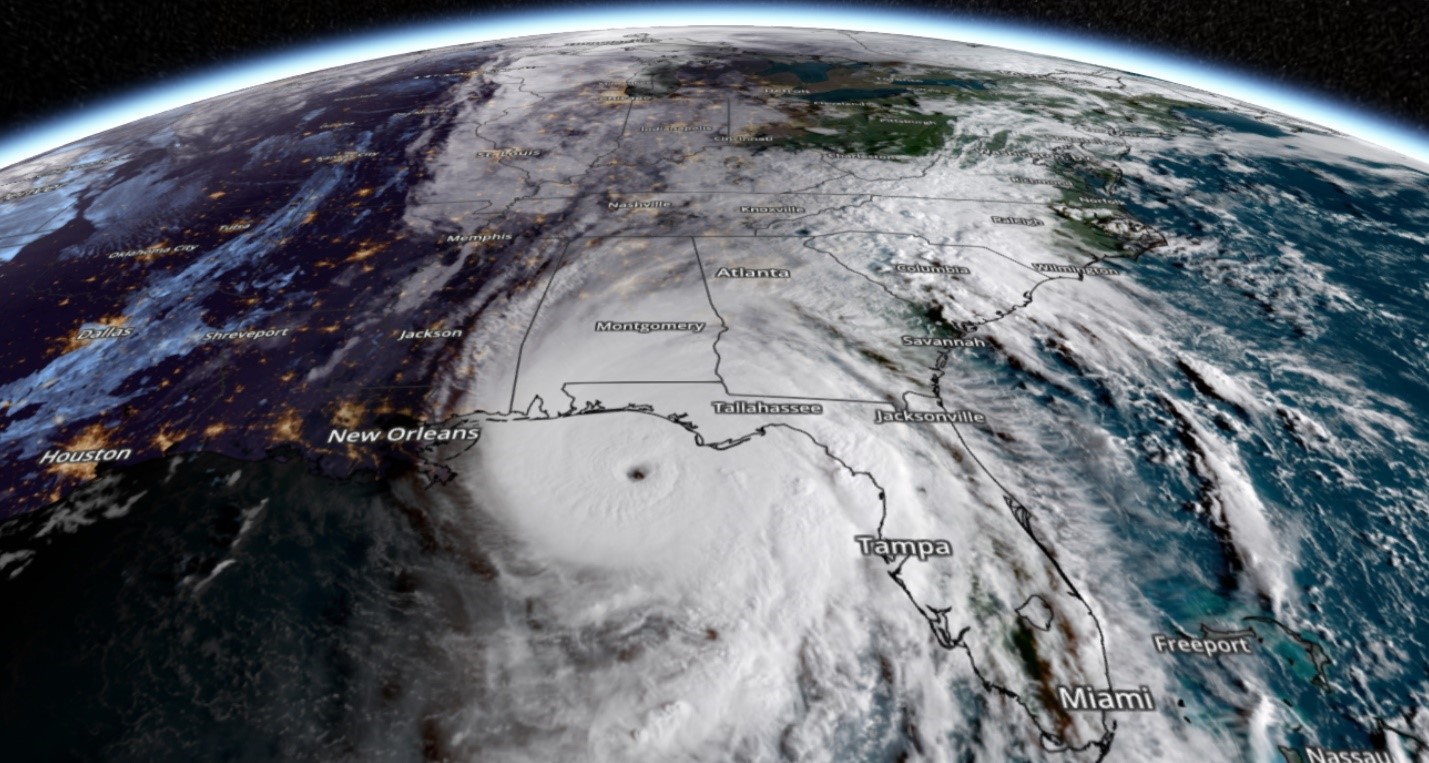 “How many more eyewall replacement cycles before landfall? Let me check the latest real-time, deep ocean temperature anomalies first”. This scenario may not be as far-fetched as it sounds.

Recent studies confirm warming of the world’s oceans is taking place faster than previously estimated; as much as 40% faster than the United Nations estimated in 2015. The implications of warming seas include stronger and more rapidly-intensifying hurricanes and more extreme rainfall amounts.

Research confirms roughly 93% of the additional warming from man-made greenhouse gases is going into the world’s oceans. Climate scientist and Berkeley Earth energy systems analyst Zeke Hausfather, an author of the recent study, explains: “In terms of the top 2000 meters, which is the range where most of the ocean heat content increase is happening – about two thirds happens in the top 700 meters, about a third is in the 700 to 2000 meters, and then there’s a few percent below that in the deep ocean, in terms of where the heat trapped by greenhouse gas is accumulating.”

In a warmer, more volatile world, accurate weather predictions will require near real-time data, not only from the atmosphere, but regional variations in ocean warming, according to Dr. Kevin Trenberth, Distinguished Senior Scientist in the Climate Analysis Section at the National Center for Atmospheric Research (NCAR). “The extra heat from increasing gases from carbon dioxide doesn’t necessarily go into the ocean uniformly. There are increasing indications that the regional manifestations of the ocean heat content – where those spots are warmer – actually matters for subsequent climate over the next 6 months or so” Trenberth explained in a recent interview. 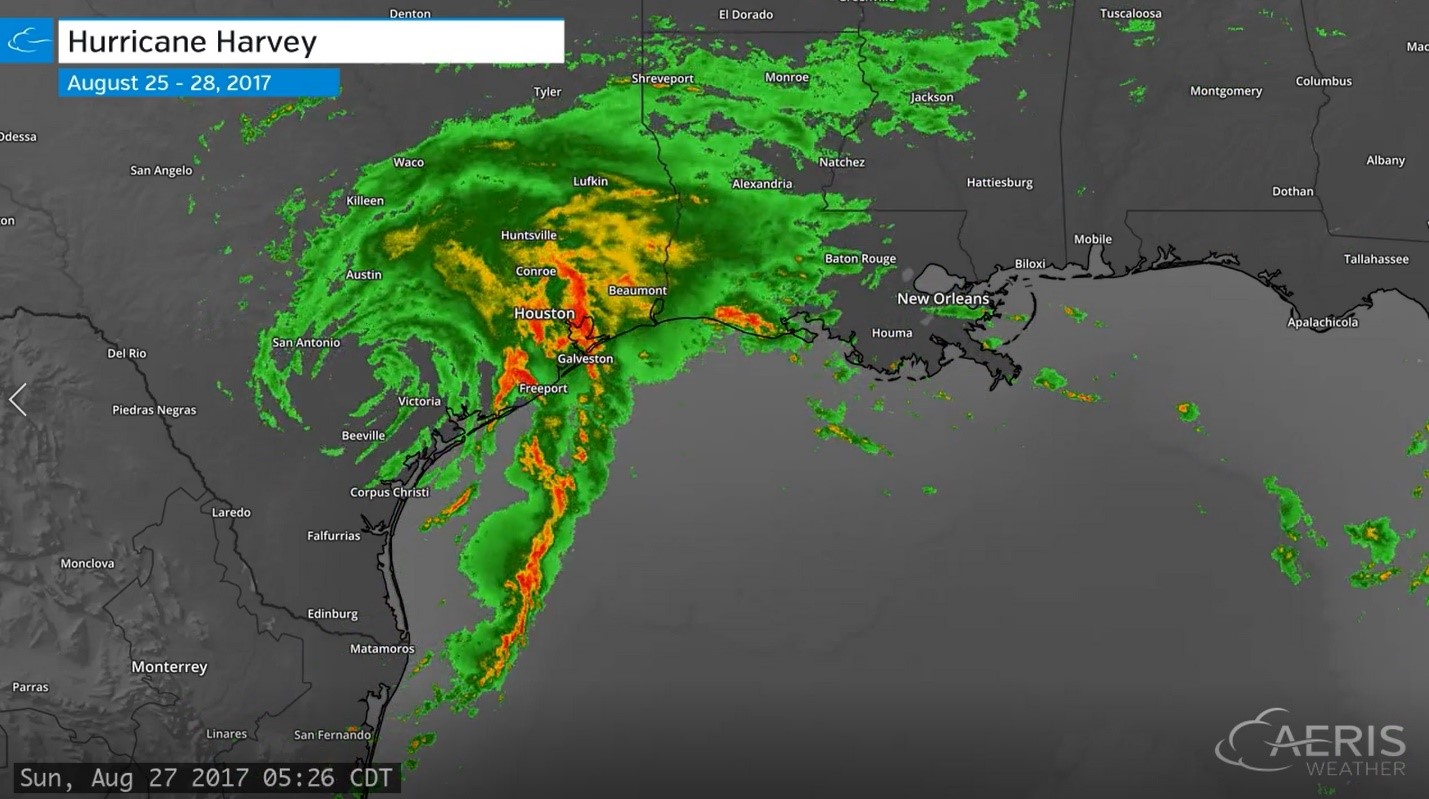 Future improvements in hurricane track and intensity forecasts may rely on increasingly coupled models that combine atmospheric measurements with regional differences in surface and upper ocean heat content, in something close to real-time. “This is an important area of research, and I don’t think it’s being adequately capitalized at the current time” Trenberth said. He points out that Hurricane Harvey tapped record levels of ocean heat content in the Gulf of Mexico before dumping over 60” rain near Houston. 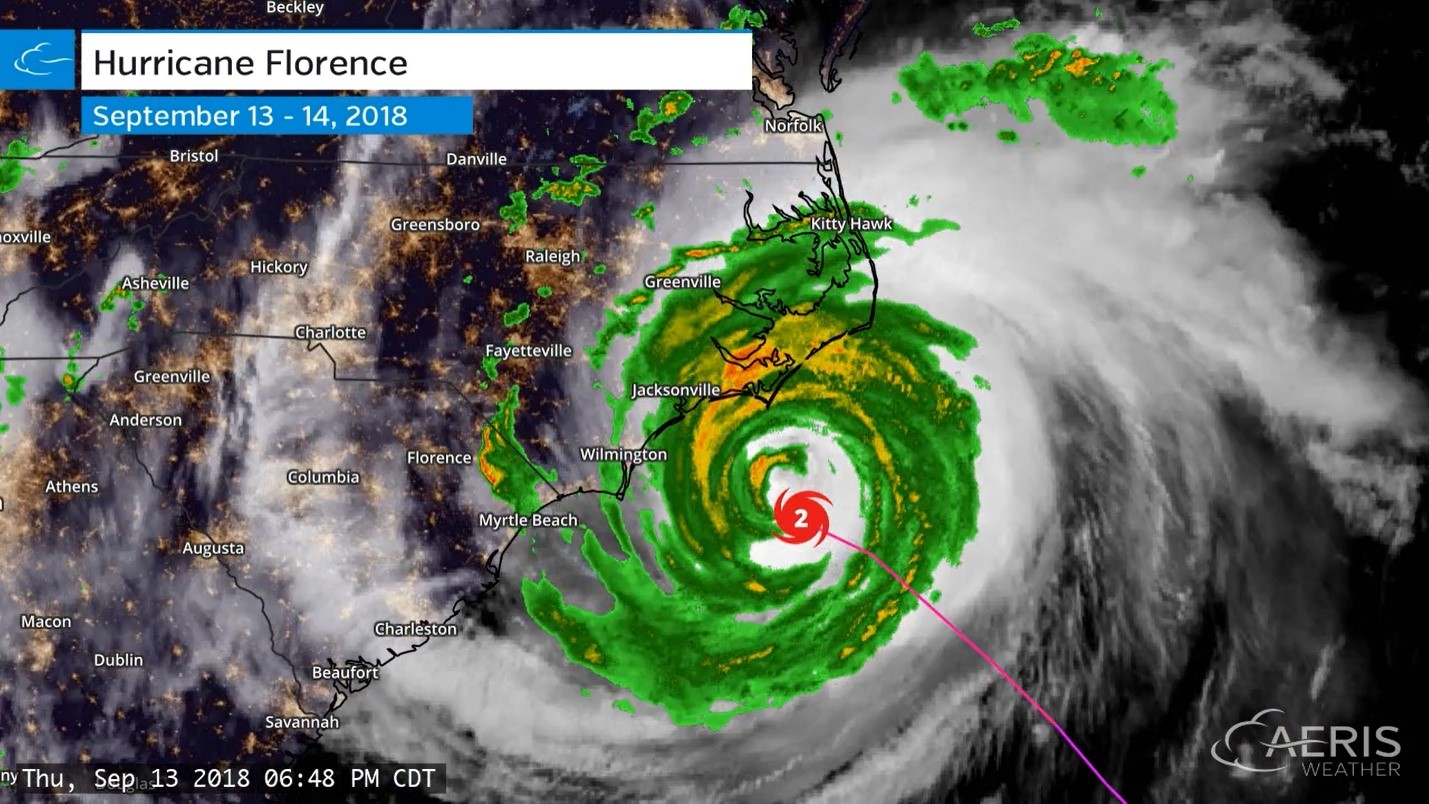 In 2018, Hurricane Florence tapped a regional hot spot of water, where natural variability combined with a warming climate, to produce the deep ocean heat content anomalies that fueled a vast swath of historic rains across the Carolinas. But real-time sea surface temperatures don’t tell the full story. “There’s a strong tendency in the past to specify sea surface temperatures and then hold them constant, but as soon as you get a good storm it starts taking a lot of heat out of the ocean, and if there’s not the ocean heat content below the surface to help sustain that, then that high sea surface temperature will peter out fairly quickly and it’s easy to get the wrong answer” Trenberth explained. “This is one of the characteristics of Florence and Harvey. Although they took a lot of heat out of the ocean there was still plenty more heat there, prolonging the lifetime of the storm.”

Like vast atmospheric washing machines, both Hurricanes Harvey and Florence were able to recirculate a continuous supply of deep-ocean warmth, jet-fuel for hurricanes, back up to the surface – prolonging intensity and extreme rainfall rates, with catastrophic results. 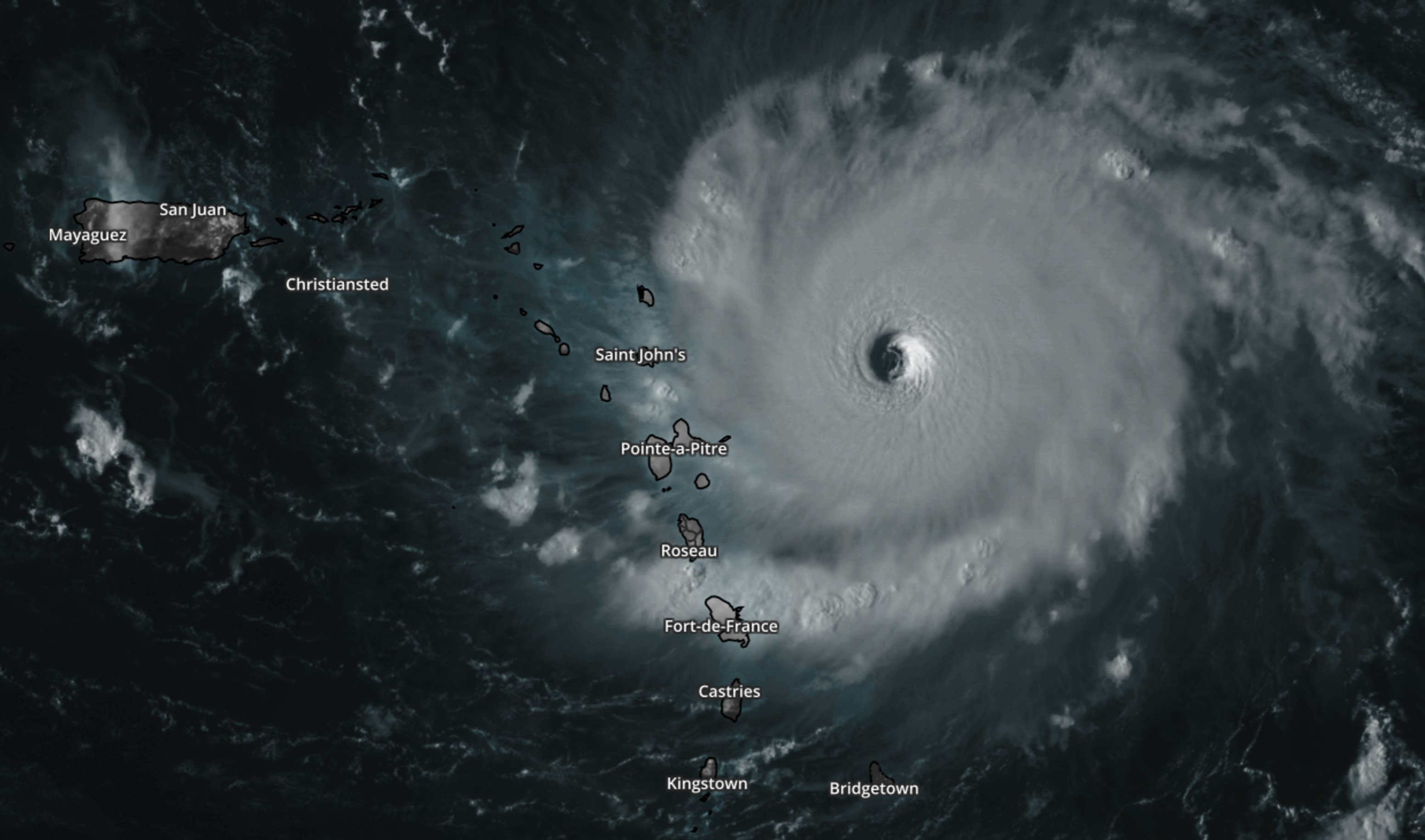 Hurricane Irma Visible Image taken late afternoon on September 5, 2017. Extreme Category 5 Irma may have gone through as many as 5 separate eyewall-replacement cycles, growing with each new cycle. Image courtesy of NOAA and AerisWeather.

The longer lifetime and sustained intensity driven by higher ocean content is what enables the eye-wall replacement to work. During an extreme hurricane, spiral arm bands wrap around the center so intensely that the storm forms a new (outer) eye wall, cutting off moisture flow to the old eye wall, which begins to collapse. The result: the storm temporarily weakens in strength (as Katrina did just at landfall in 2005), but the storm expands in size, and given high ocean heat content the hurricane can re-intensify during eyewall replacement. This happened with Hurricane Irma five times, and Trenberth believes these same dynamics were witnessed with Hurricane Florence. This is how storms grow bigger, more intense and longer-lived, fueled by a steady supply of ocean heat content (OHC).

Stating the obvious: for operational meteorologists to have any chance of accurately predicting hurricane eye-wall replacement cycles, which impacts storm size, intensity and severity of subsequent storm surge, access to reliable temperature data in the upper oceans may be key. 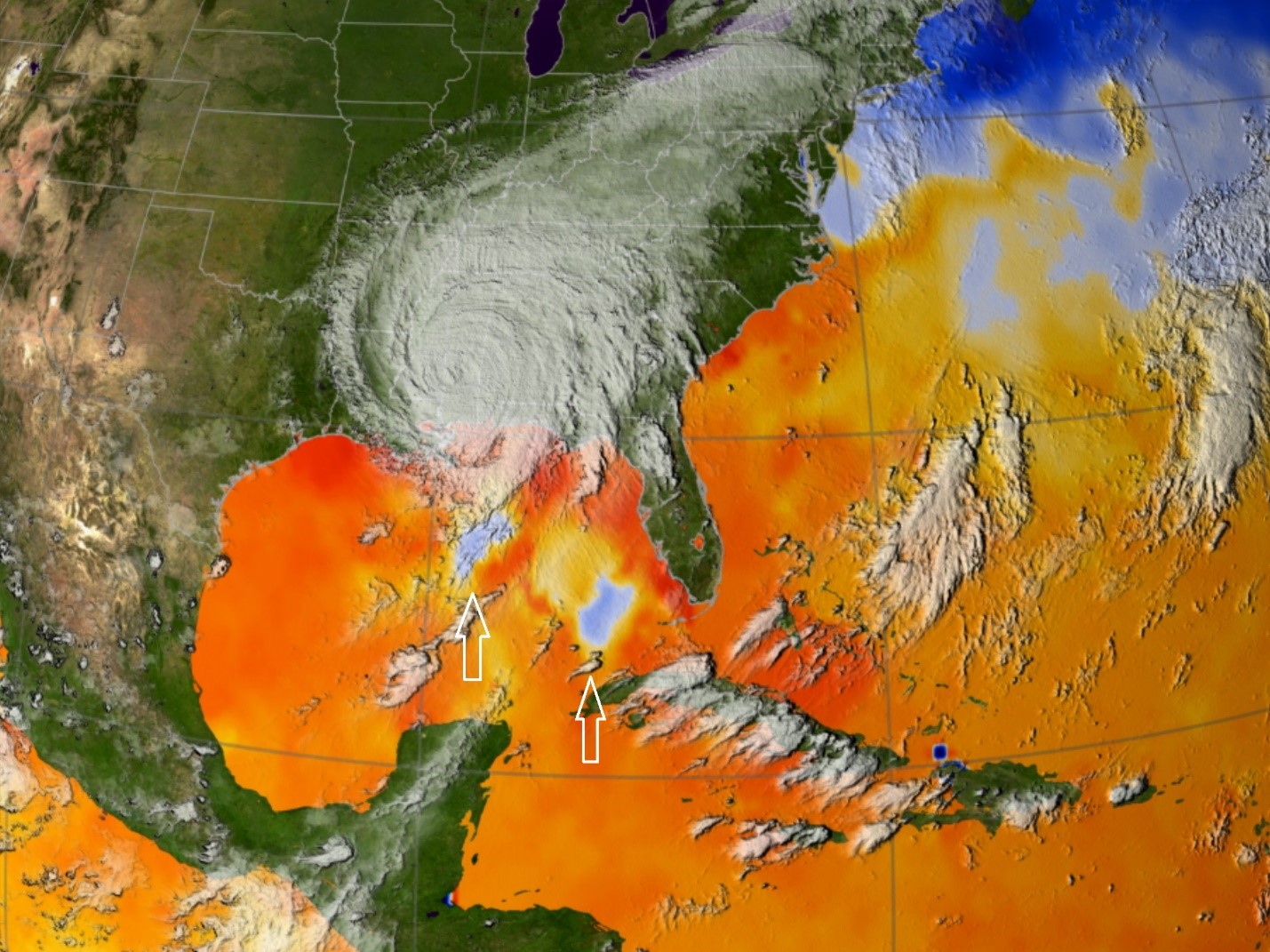 Older coarse-resolution models of hurricanes may have gotten hurricane intensity about right, accidently, due to cancelling errors: coarse resolution lowered the intensity, but not adequately factoring the storm’s cold wake increased it. Now that we have much higher resolution models, they are apt to have too much intensity, unless an interactive ocean is included.

Hurricanes are nature’s quirky, automatic pressure-relief valves, transporting excess heat and moisture away from the tropics toward the poles, leaving behind trails of cooler water in their wake. But current weather models can’t capture real-time changes in surface and deep ocean heating. And so, the challenge remains, especially for tropical cyclone intensity forecasts. It’s the age-old dilemma: junk in – junk out. How can we accurately predict the future when we can’t get an accurate snapshot of what’s happening right now – both atmospheric and oceanic?

Data from the Argo network of nearly 4,000 drifting floats in the world’s oceans could be programmed to provide deep sea temperature data more frequently, close to real-time during hurricane scenarios. Right now, Argo data updates roughly every 10 days. “In places like the Gulf and East Coast they could program those to come up and down more frequently” Trenberth speculates. The result would be a more comprehensive understanding of upper ocean water temperature profiles, giving forecasters the ability to gauge whether a hurricane’s cold wake may be resupplied with additional warming at the surface, thus prolonging the storm.” 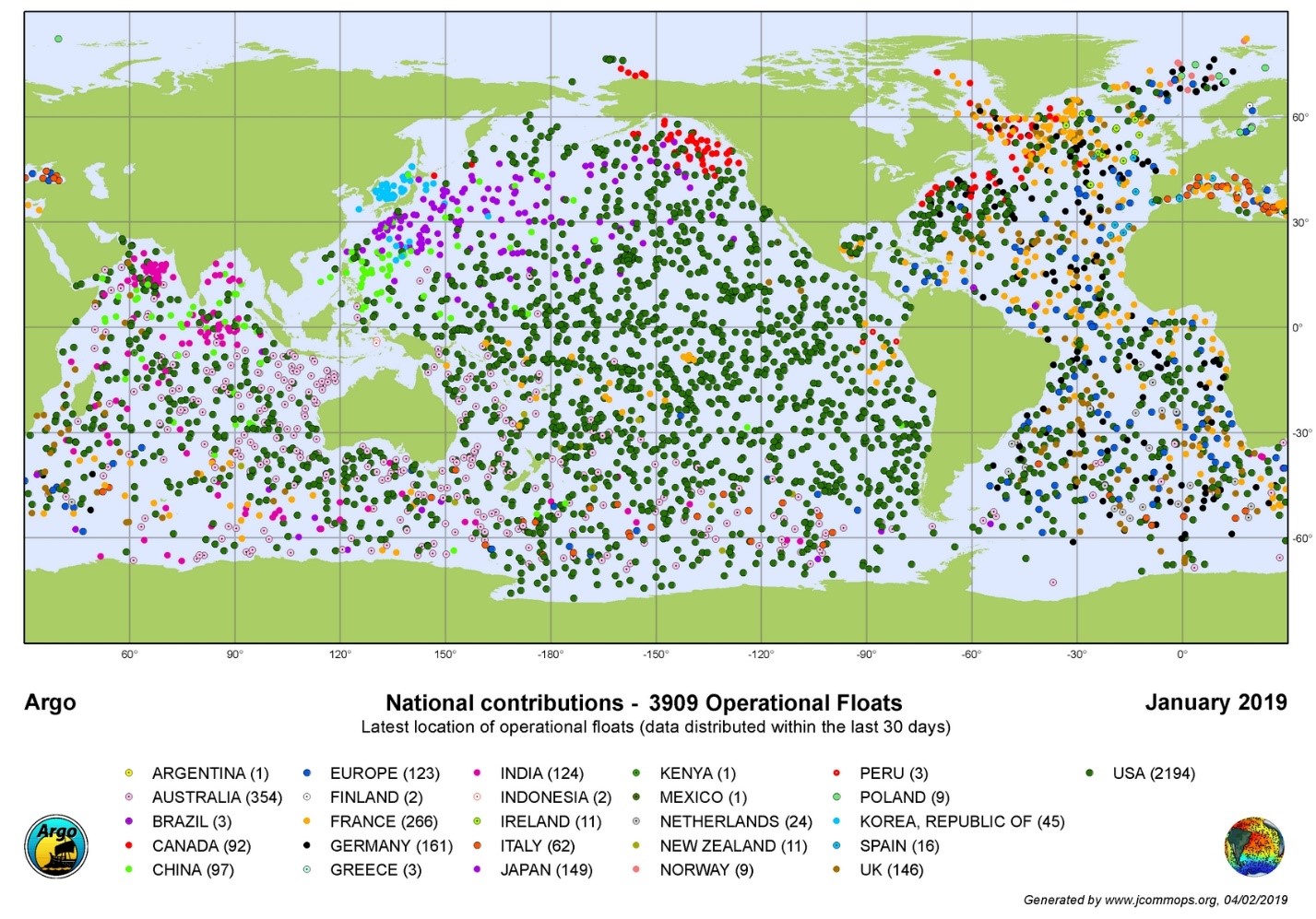 Accurate prediction of increasingly powerful (and wet) hurricanes require increasingly sophisticated and coupled models, which combine atmospheric measurements with regional hot spots of unusually warm and deep ocean water. Hurricanes don’t follow identical tracks, because the next hurricane can “feel” where a previous hurricane has been. Trenberth’s take: “Until we properly put those kinds of factors into our models, we’re not going to quite get those tracks right.”

But regional hot spots of unusually warm, deep water may have implications beyond fueling hurricane strengthening and rainfall prediction. Non-tropical cyclones, the bread and butter low pressure systems that parade across our daily weather maps, may also be impacted, especially redevelopment of east coast storms, feeding on tropical warmth and moisture. “This can lead to some intensification but it’s also apt to lead to development out ahead of the storm, so it affects the actual track of the storm. It may also lead to some increase in the size of the storm” Trenberth explained. 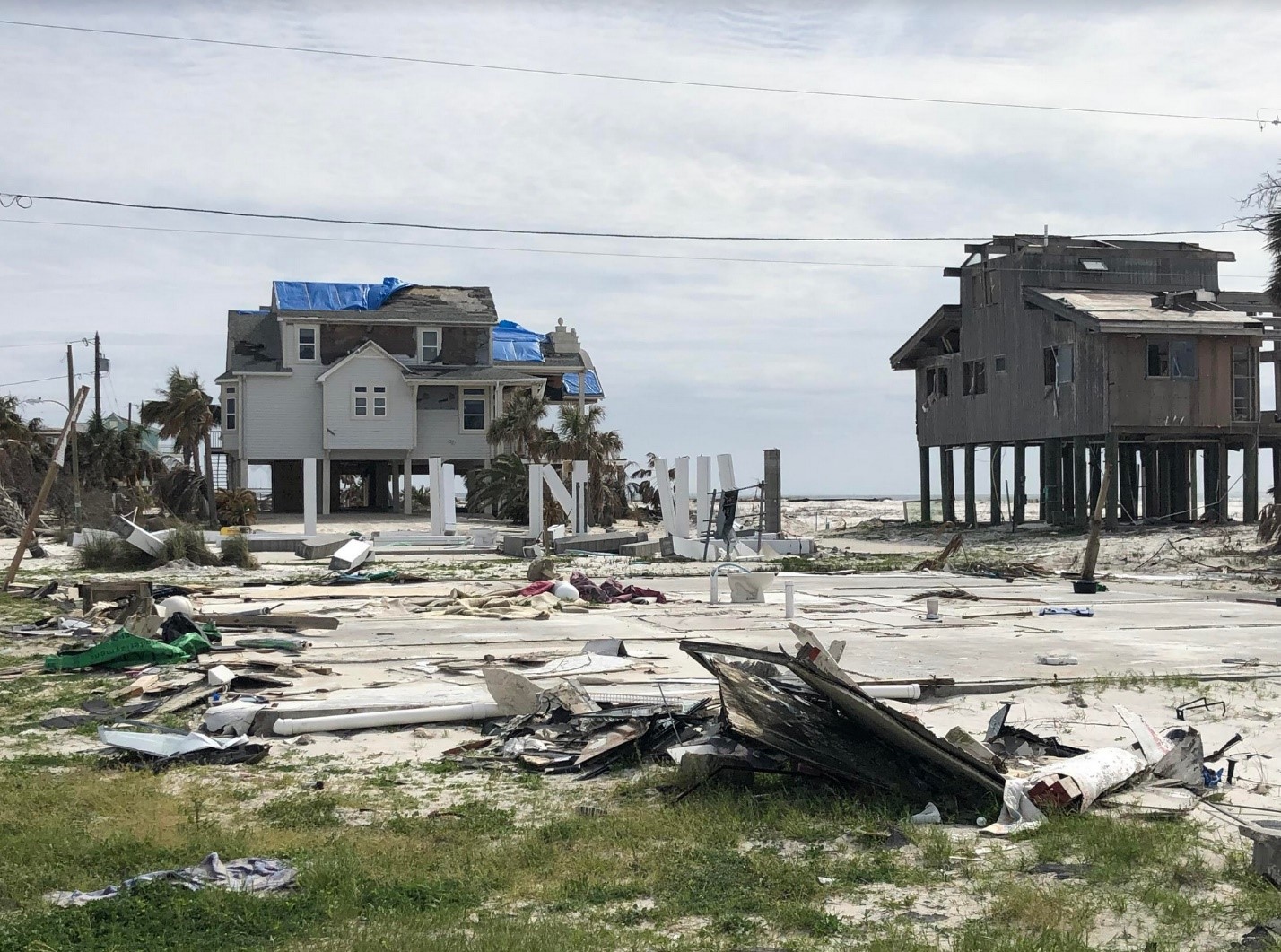 Aftermath of Hurricane Michael in Mexico Beach, Florida. Photo taken by the author on February 24, 2019.

Weather data and high-resolution weather mapping are more accessible; weather model physics continues to advance and improve, but Hurricanes Harvey, Florence and Michael are reminders that the most accurate forecasts of track, intensity and rainfall require extensive, real-time analyses of ocean heat content, and not just at the surface. With rising CO2, warming oceans fueling increasingly potent hurricanes makes real-time, deep ocean data a necessity, not a luxury.

Paul Douglas is co-author of “Caring for Creation: An Evangelical’s Guide to Climate Change and a Healthy Environment”, and co-founder and senior meteorologist at AerisWeather, located in the Twin Cities of Minnesota.