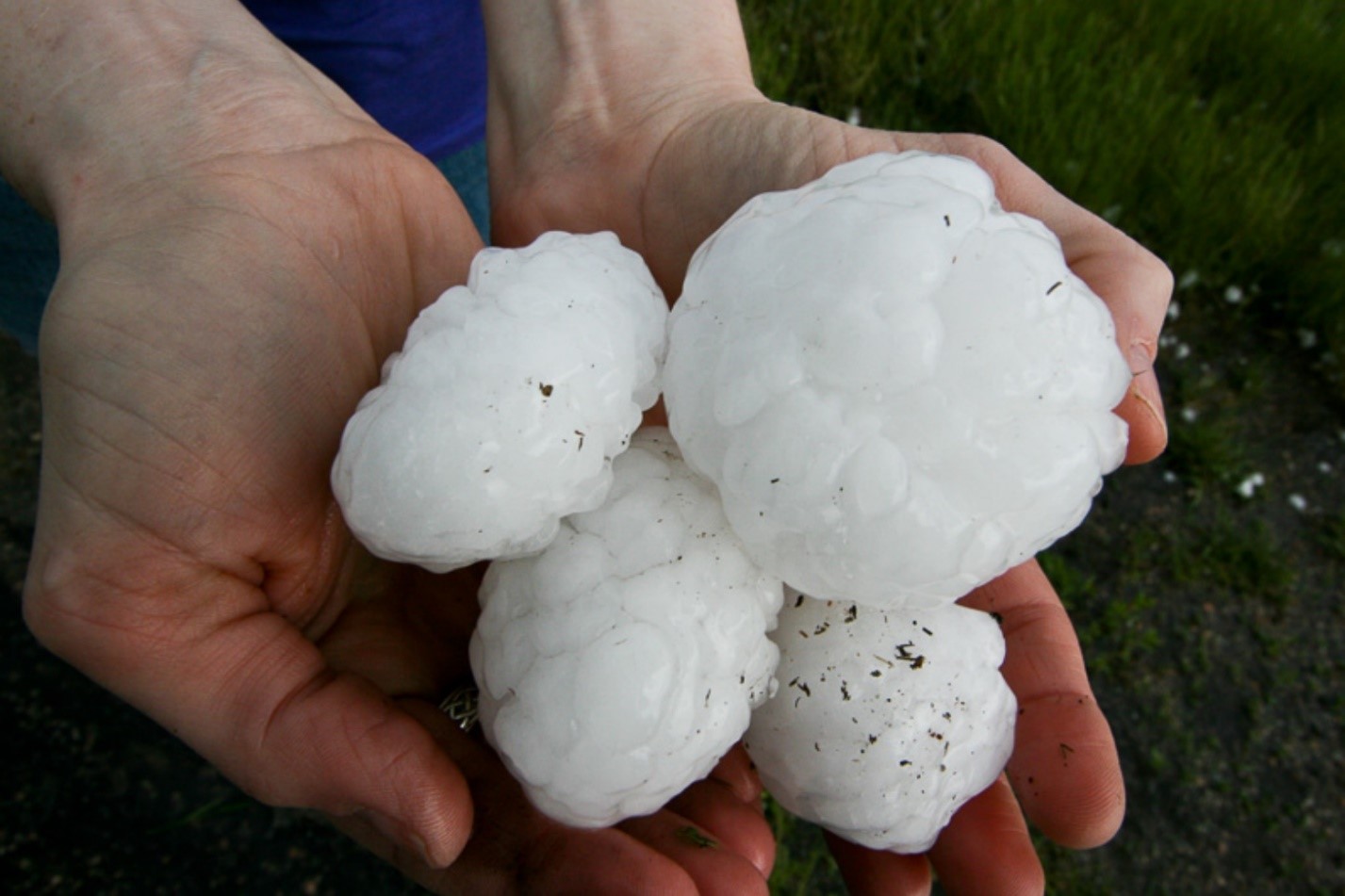 Are We Seeing More Hail In A Warmer, Wetter World? Experts Say Not Yet

“Come hell, hail or high water.” For anyone who has had their car dinged or shingles shredded, there’s a perception that damaging hail is on the rise. But a careful look at the observational record suggests otherwise.

As a meteorologist and businessman, I respond to data. If I ignore data, evidence or trends that make me uncomfortable, I quickly go out of business. Separating out the signal of climate change from the noise of random everyday weather is challenging. When it comes to hail trends, perception, and a changing observational baseline over time, may be trumping reality. 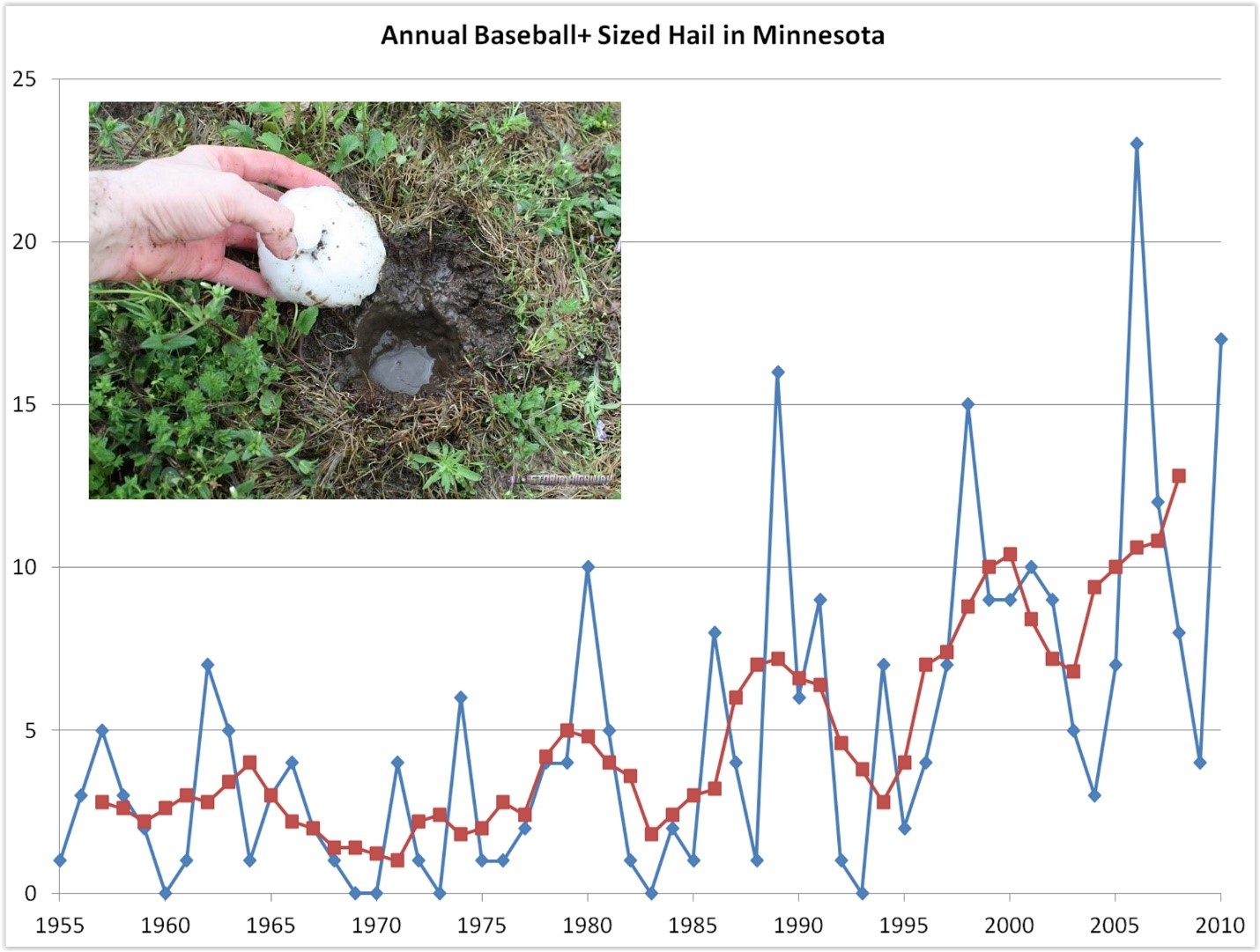 A graphic from the Insurance Federation of Minnesota (above) has intrigued me over the years, showing an apparent increase in the number of reports of baseball size hail (2.75” diameter) in Minnesota since 1955. Its president, Bob Johnson, explains: “The change in the weather patterns that we’re seeing in the last decade, the extreme weather is bringing bigger claims, both the number of them and the severity is up. That’s nationwide.”

Scientists who study attribution, linking specific weather events to a warmer, wetter climate, have doubts. “I’m not aware of an observational study that has concluded hail frequency and large hail frequency is increasing” said Dr. Michael Tippett, Associate Professor of Applied Physics and Applied Mathematics at Columbia University in New York City. “Difficulties with the data makes this a vexing challenge” he said during a recent interview. 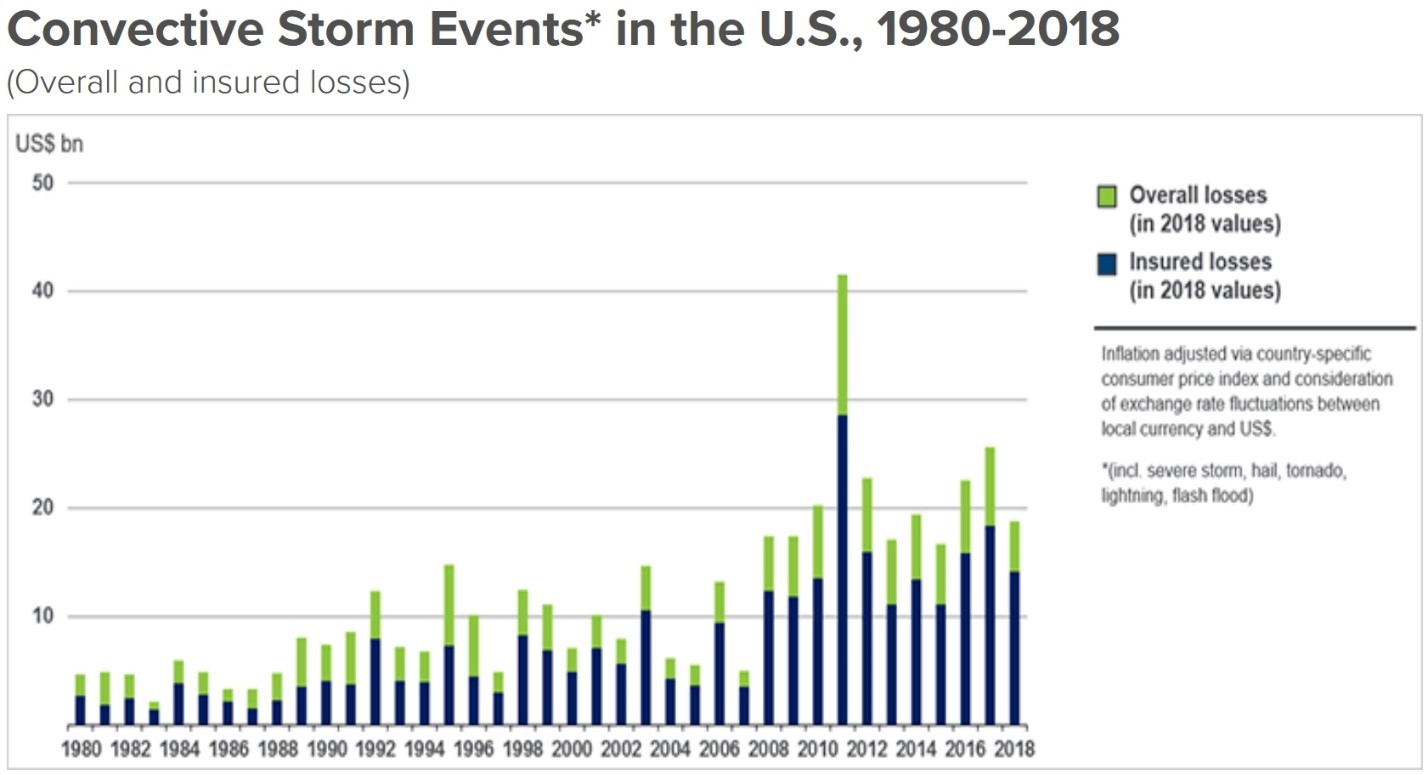 Hail and wind-related losses from severe thunderstorms are, in fact, trending upward, according to data from reinsurance companies like Munich Re. But multiple factors may be responsible for these trends, including expanding cities, dubious observations, untrained storm chasers, rising building costs, even unscrupulous roofing contractors filing false claims. Pinning any apparent increase in hail frequency and cost entirely on a warming world may be, at best, simplistic.

“There was a shift, but the consensus opinion right now is that the shift in hail reports might be an artifact of changes in operating practices and roll-out of new technology” says hail researcher Julian Brimelow, a PhD Physical Sciences Specialist at Environment and Climate Change Canada. “The data aren’t there. We’ve had similar problems with tornadoes – you’re dealing with a relatively rare phenomenon; people are very subjective and things change.”

Remote Sensing of Hail. Merging the output of nearby National Weather Service WSR-88D Doppler radars creates new indices, including “MESH”, derived from the Severe Hail Index (SHI), which is essentially a thermally weighted vertical integration of reflectivity above the melting level. Courtesy of OU-CIMMS and the University of Wisconsin.

Dr. Tippett agrees. “There are products for hail based on remote sensing, radar, etc – but they don’t go back more than a decade or two, so it’s hard to get a sense for whether a trend is robust or not” he said.

“Hail was the sleeping dragon” according to Brimelow, noting that expanding population centers in areas that have a high, natural climatological frequency of hail is costing the insurance industry billions of dollars a year, heightening concern. “Unfortunately, with hail, like most severe weather databases, the data are flawed. We don’t have a continuum of standard operating practice when it comes to hail.”

Dr. Noah Diffenbaugh, Professor of Earth System Science at Stanford University, believes weather variables like hail, not measured around the clock by independent instruments until relatively recently, but by subjective human reporting, amplifies the challenge. Population density, more than any other variable, will affect the likelihood a person sees a tornado or a hailstone of a certain size. “You don’t decide who gets into the Hall of Fame based on one season’s worth of baseball statistics. Portfolio managers don’t decide whether or not to sell all the stock in a company based on one day of market performance. In order to detect trends, we need well-developed, long term observational records”. And a reliable, bias-free baseline for hail observations simply doesn’t exist, not yet. 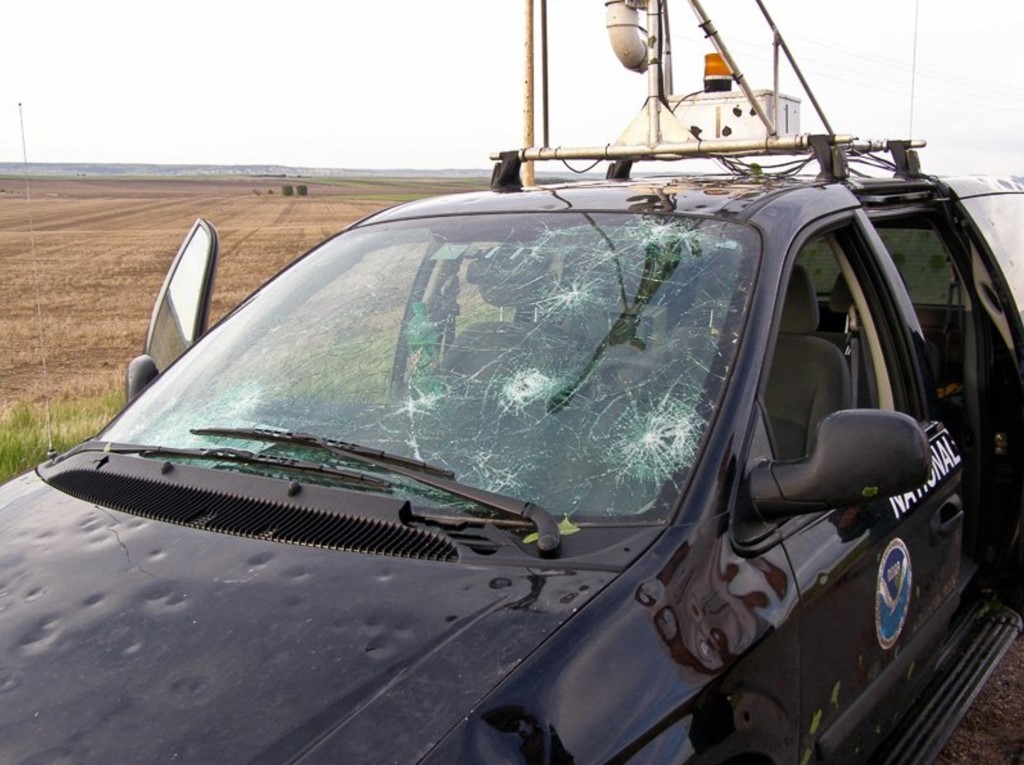 Hail records are a hodgepodge. In the 1990s cable TV and the movie “Twister”, among other factors, encouraged storm chasers to converge on severe supercell thunderstorms, who tended to field far more hail reports than tornado videos. Today, social media is an even stronger influence. What was farmland in the 1970s is now subdivisions and strip malls. When hail does fall – naturally – there are simply more high-value targets to hit, and more people observing it. “What you might call the sampling effort isn’t a constant” says Diffenbaugh. “There are different incentives to find severe events and chase them in some cases.” NOAA’s definition of “severe hail” went from ¾” to 1” diameter in 2009, so there are reporting inconsistencies. Scientists subsequently decried “hail inflation”. “Changes in individual National Weather Service offices and changing procedures in how hail reports are gathered increases confusion, and the goal of detecting a reliable, repeatable hail signal” according to Diffenbaugh. 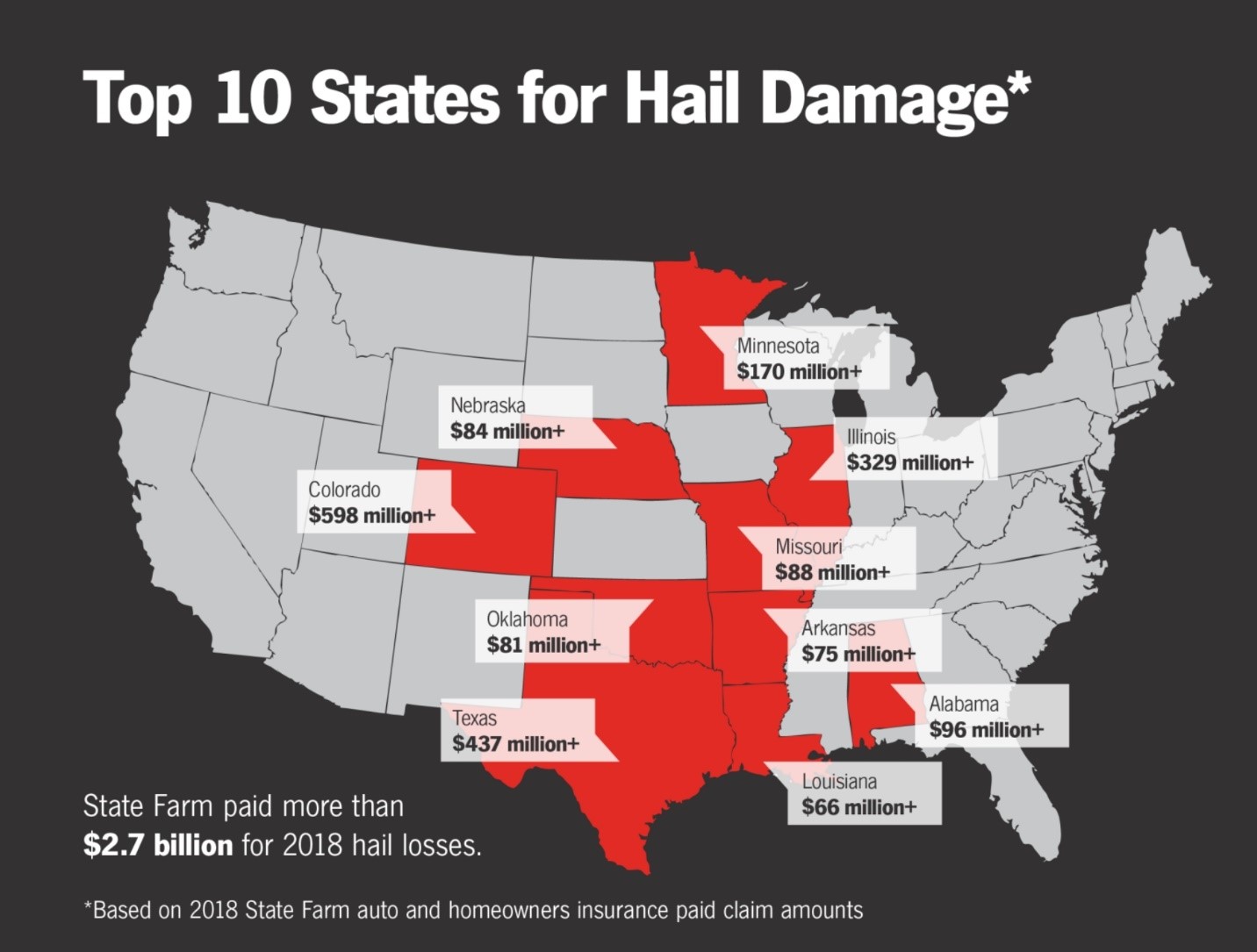 That doesn’t change the fact that homeowners and insurers are paying more for hail damage. A single hailstorm in the northern suburbs of the Twin Cities on June 11, 2017 left behind $3.2 billion in damage, one of the world’s most expensive storms that year. But urban sprawl and dumb luck may be the larger factor in an apparent uptick in damaging hail reports.

“Observationally, there isn’t a lot of evidence at this stage that a warming signal is affecting frequency or size of hail” according to John Allen, Assistant Professor of Meteorology at Central Michigan University. “Tornado records are relatively well-controlled; hail records are horrendously bad”. It turns out discerning hail size from damage is not very easy or accurate and hail often melts before it can be measured. Tornadoes leave behind much less ambiguous evidence regarding their intensity. There is also a myriad of factors in play, including rising costs of building supplies (shingles aren’t getting cheaper) and lighter, more fuel-efficient vehicles aren’t as hail resistant as cars and trucks built a generation ago. “Modern cars seem to dent more easily than older vehicles” Allen acknowledges. He also believes that people – inherently – are not very good at estimating how big a hailstone is.

Robert Johnson, President of the Insurance Federation of Minnesota, agrees that multiple factors are in play. “Average homeowners insurance premiums in Minnesota are up over 360 percent. Are there other factors? Absolutely. But at its core there are just a lot more of these types of storms. Period. That’s what the numbers are telling us.” Strengthening building codes and explaining all the factors involved is one step forward, Johnson says. “We have to manage risk. If we don’t do anything and the product becomes unaffordable, people won’t buy it.” he said. 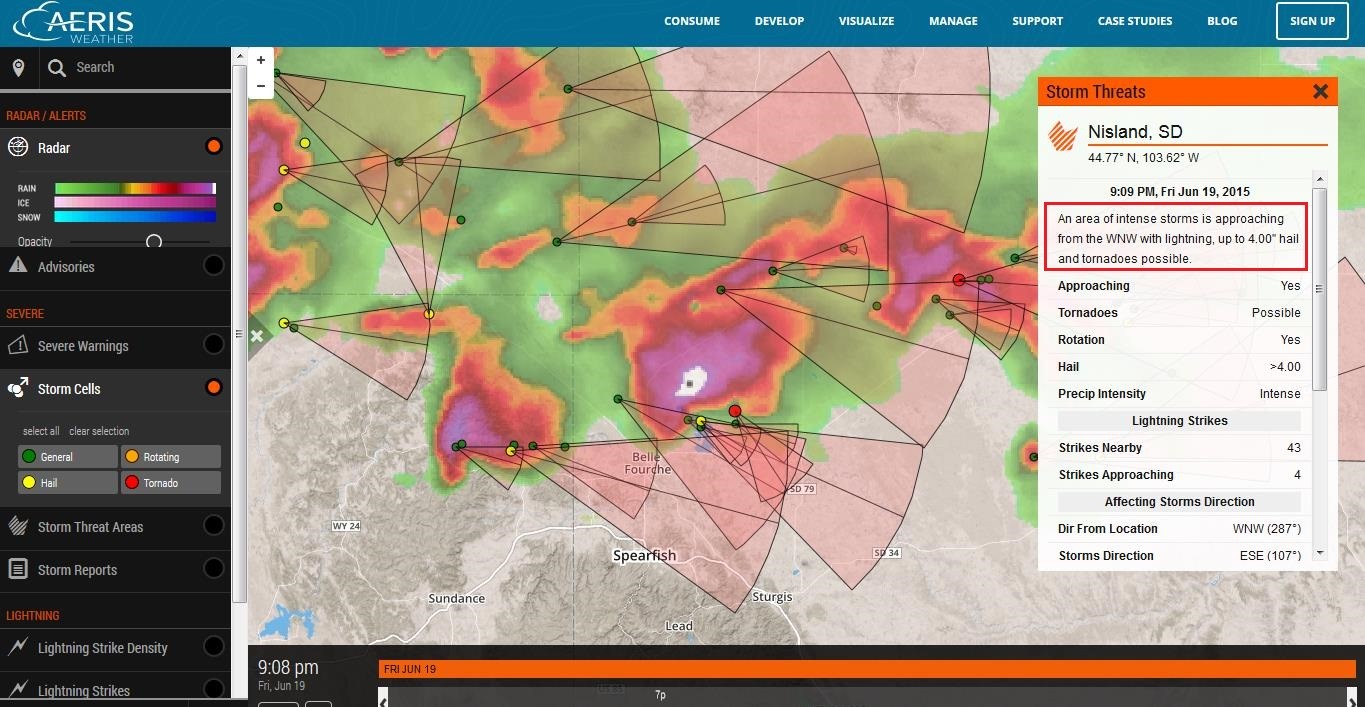 There is emerging consensus that a warmer, wetter world will increase hail frequency for some regions. Increased warming will increase CAPE, a measure of buoyancy, resulting in stronger thunderstorm updrafts, while a slight decrease in wind shear aloft may not be enough to cut down on the number of hail days, especially west of the Mississippi River. “We might get fewer hail days, but when it does hail, because of increased buoyancy and increased moisture and lapse rates, we could be seeing more frequent instances of large, damaging hail” predicts Dr. Julian Brimelow, who sees a possible increase in the number of large summer hail events over the foothills of the northern Rockies and Canadian Prairies.

Warming may reduce hail frequency over southeastern states, where smaller hail will be more prone to melting before reaching the ground. “More moisture fuels stronger updrafts, but warmer temperatures mean that some of the small hail won’t reach the ground” Dr. Michael Tippett explained. He predicts hail season may last longer, extending farther north and west. Tippett says less small hail has already been observed in recent research in France and China. “Changes in the melting level will be accompanied by less small hail, but the same or more large hail” he adds. Larger hail can travel at 20-50 meters/second; the time large hail spends below the melting level is much shorter than small hail. 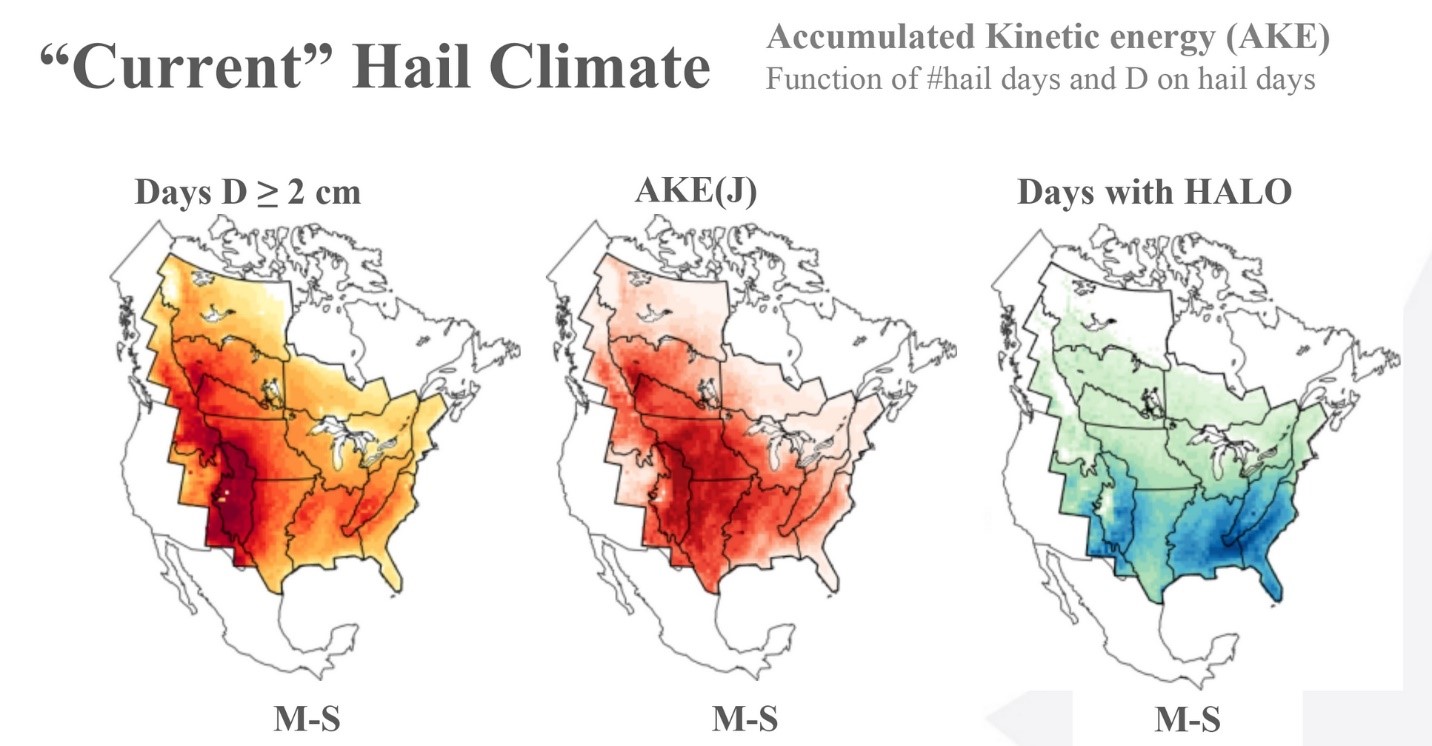 Hail in a Warming World. Graphic source: “The Changing Hail Threat Over North America in Response to Anthropogenic Climate Change”. Julian Brimelow, William Burrows and John Hanesiak, Meteorogical Service Canada. “HALO” stands for “hail aloft only”; days when the model produced hail in the thunderstorm, but it melted before reaching the surface.

“’In a warmer world, thunderstorm updrafts get a little stronger, but more moisture is getting into the updraft which may offset this. We should see an increase in the largest hailstones” predicts Dr. John Allen at Central Michigan University. “There are places where there will be more frequent large hail” Michael Tippett concludes. Dr. Noah Diffenbaugh has a similar long-range hail outlook. “We find an increase in severe thunderstorm days overall east of the Rockies with increasing GHG concentrations.” Brimelow at Environment Canada concurs. His efforts are extending beyond coarse, severe storm environmental conditions, using regional climate models to drive a cloud and hail model to delineate supercell initiation. His prediction: “Moving forward, it does look like that potential for large hail in certain regions and certain times of the year is very likely to increase.”

Careful analysis suggests any current increase in hail frequency or size is probably an artifact of expanding suburbs, new Doppler technology, changing observational baselines and unreliable observations, as well as the inherent difficulty of estimating the size of a rapidly melting hailstone. But the verdict is, at best, a mixed blessing.

A warmer, wetter world should increase hail frequency and size across parts of the United States, Canada and the planet in the years to come. Complacency feels premature. Consider any near-term close encounter with hail an icy shot across the bow.

Paul Douglas is co-author of “Caring for Creation: An Evangelical’s Guide to Climate Change and a Healthy Environment”, and co-founder and senior meteorologist at AerisWeather, located in the Twin Cities of Minnesota.