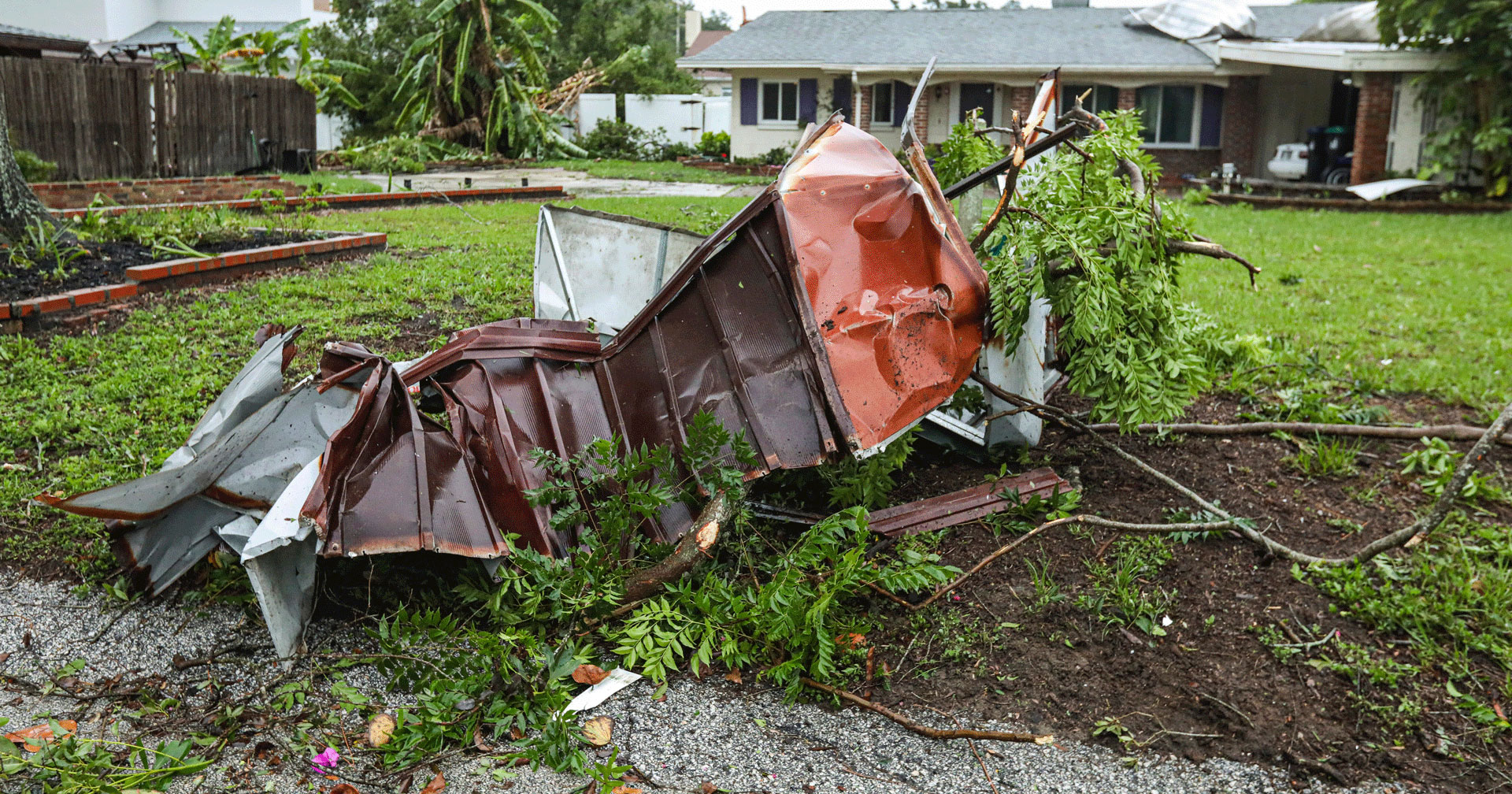 6 Takeaways From The Biggest Swarm of U.S. Tornadoes Since 2011

America’s tornado drought is officially over. The last few years have been relatively quiet, with few large, violent tornadoes. In 2018 there were no tornado-related deaths in traditional Tornado Alley, stretching from Texas to Iowa. But so far in 2019, 31 Americans have lost their lives to tornadoes, nature’s most extreme, unpredictable and capricious wind storms. In the last 2 weeks at least 366 tornadoes have been observed east of the Rockies. Once again, the United States is living up to its reputation as the tornado capital of the planet.

Over the last couple weeks I’ve watched in morbid fascination as a remarkably consistent witch’s brew of meteorological conditions created tornado weather from Texas to Pennsylvania; at last count over 600 tornadoes so far in May — the most of any month since April 2011. That was the year of the Super-Outbreak and the catastrophic Joplin, Missouri tornado, which claimed 161 lives; injuring 1,150 more.

After much reflection I have a few minor weather observations; assorted meteorological gripes I need to get off my chest.

1). A warning is worse than a watch. Too many people still don’t know the difference between a tornado watch and a tornado warning. A tornado watch means “watch out”; conditions aloft are ripe for the creation of spinning “supercell” thunderstorms capable of spinning up tornadoes. Go about your normal activities but stay alert and be ready to move to a safe location if threatening weather approaches your location. Watches are issued for thousands of square miles and last 4–8 hours, on average. A tornado warning issued by your local National Weather Service office means that a tornado has been spotted, either on Doppler radar or by professionally trained weather spotters. Tornado warnings are issued for individual counties and last for 20–40 minutes. It means life-threatening weather is imminent, and if your county is listed, it’s time to take evasive action.

2). Tornadoes can’t hit cities! Absolutely, unequivocally false. Kansas City was almost hit by an EF-4 tornado the evening of May 28; the system weakened as it pushed into western suburbs. Major metropolitan areas have been struck repeatedly over the years (check out the remarkable list at Wikipedia), no city more than Oklahoma City, in the traditional heart of Tornado Alley. The perception is that — somehow — high rise buildings will save me. The reality is that a little concrete and asphalt won’t make a spit of difference to a supercell pulling in warmth and moisture from a 5–15 mile radius. Tornadoes can hit cities, cross rivers and lakes, even cross mountain ranges. Don’t delude yourself into thinking you are somehow immune from tornado damage.

Although rare west of the Rockies, every state in the nation has experienced tornadoes, even Alaska and Hawaii. And no country on Earth experiences more tornadoes than the United States; near 1,200 a year, on average. Why so many? Chalk it up to geography and the Rocky Mountains running north-south. Unlike the alps in Europe which stretch east-west, there is no natural geographic block between warmth and moisture from the Gulf of Mexico, and cooler, drier air of Canadian heritage. When opposing air-masses scuffle, and winds aloft are strong, conditions can be ripe for spinning thunderstorms, the rotation picked up by Doppler Radar.

3). Late night tornadoes are disproportionately deadly. And there’s a simple reason for this: people are asleep, not paying attention to the weather moving in. Although rare, when dynamics are present (strong wind shear, extreme instability and surface boundaries nearby) tornadoes can form at any hour of the day…or night. Some of the most recent tornado fatalities from Golden City and Jefferson City, Missouri to El Reno, Oklahoma to Dayton, Ohio, where impacted after dark, when people often let their guard down. During a watch situation (even a severe thunderstorm watch) it’s a good idea to check the weather on TV, radio, a favorite web site or phone app. Nobody likes surprises, especially during the wee hours of the morning. The specter of hundreds injured because a tornado struck while people are sleeping is one of many things that keeps me up at night. But there don’t have to be unpleasant surprises.

During a recent interview, Dave Hubbard, COO of AerisWeather, highlighted a leading security company utilizing severe weather alerts to notify customers of incoming severe weather, including tornadoes, hurricanes and floods. “Having a security system that will watch over people when they are sleeping or relaxing without access to their phone or computers is crucial, and that’s what a security system with active weather alerts can do,” said Hubbard. In a day and age when consumers are swimming in a world of free apps and weather web sites, many companies still require personalized briefings and alerting for specific facilities, with company-specific standard operating procedures that leave nothing to the imagination.

4). Technology will save me! Perhaps, but don’t count on it. The national network of 160 WSR 88-D National Weather Service Doppler Radars is truly amazing technology, able to detect wind direction inside the most intense spinning storms capable of spawning a tornado. But nothing is foolproof. A few days before a major tornado outbreak, we often know which states will be most vulnerable, but certain scenarios may only allow 5–15 minutes of lead time when it comes to warnings. The national average lead time is 13 minutes from when a warning is issued, and when the tornado hits. But 60–70% of all tornado warnings turn out to be false alarms, which can breed apathy. The one time you don’t run to the basement may be the time a real tornado plows through your neighborhood.

The big tornadoes are relatively easy to detect, but small, brief tornadoes are often harder to detect and warn on. At the end of the day there is no substitute for common sense and personal responsibility. Every individual, family and company should have a Tornado Action Plan.

At the end of the day you can’t count on government forecasters or your favorite meteorologist to save you. It comes down to personal responsibility, making a plan and paying attention on the handful of days every year when tornadoes are possible. Because at the end of the day the only person who is going to save you is…you.

Thumbprint of a violent tornado. The EF (enhanced Fujita) scale is a measure of tornado damage, assessed after a storm hits. Rare EF-4 and EF-5 tornadoes can produce wind speeds approaching 200 mph, capable of scraping well-constructed brick and stone homes down to foundation.

A warning or emergency has just been issued — where would you go? You may only have minutes or even seconds to get to a safe spot. Where is it? In much the same way we practice fire drills we should be going through the motions with tornado drills on a regular basis, so there is no question where to go if and when a twister threatens. It should be muscle memory. A few reminders:

– The smaller the room, the better. The more walls you can get between you and a tornado, the better. That usually means a below-grade shelter or basement, under the stairs is the safest place to ride out a tornadic storm. If you can hide under a table or other object the risk of injury from falling debris is reduced.

– No basement? A small room or closet near the center of the building is safest, away from outer walls and windows. Remember, it’s not the tornado itself that will kill you, but what’s in the tornado. Most people perish after being struck by debris traveling at 100–150 mph. Imagine a landfill caught up in a blender. That’s a tornado: 15 to 60 seconds off earth-shaking, heart-pounding atmospheric fury. Interior closets and bathrooms often offer considerable protection. People have survived large tornadoes by seeking shelter in their bathtubs, with blankets or pillows on top of them.

– Things to avoid: vehicles and manufactured housing, which can become airborne at speeds over 100 mph. It’s often possible to drive away from tornadoes, but if a direct strike is inevitable, seek shelter in a building (any building) or a ditch. Do not hide under a bridge overpass, as a wind-tunnel effect can increase the threat of injury from flying debris.

5). Situational awareness is key. We’re all busy — all of us are perpetually distracted. Tornado weather can sneak up on us when we’re living our lives, running errands, focused on other things. But a quick check of NOAA’s Storm Prediction Center (SPC) web site can tell you, at a glance, the magnitude of tornado risk for a given day. If there’s an Enhanced, Moderate or High risk, you need to go out of your way to pay attention later in the day. The most dangerous time is right before dinner, right after the high temperature for the day, when the atmosphere is most unstable — most primed for nature’s deadliest wind. Keep an eye on the sky, and Doppler Radar. This is one of my favorite sources of radar, a national mosaic of local NWS Dopplers that animates, so you can see where the storms are moving.

I advise consumers and corporate clients to have multiple safety nets. Don’t rely on just one source, but have numerous, overlapping sources of severe weather information updating during the day. That means TV, radio, web and apps on smart phones. Don’t rely on sirens — they were designed for outdoor use only. Sirens were never meant to be a primary warning device for people indoors.

One of the cheapest forms of life insurance is NOAA Weather Radio, which can sell for $25–75. It’s possible to enter just your county into the receiver, so you won’t be annoyed when warnings are issued for adjacent counties. But if a Tornado Warning is issued by your local National Weather Service for your county at 3 am when you’re sound asleep, a shrill alarm will wake you up in time to get to the basement or comparable shelter. Odds are your phone or TV won’t do that.

6). New times require new tools. There is no hard evidence that a warmer, wetter world is spinning up more tornadoes. Articles have been written about a possible south/east shift in Tornado Alley, with more large and deadly tornadoes observed in Dixie Alley in recent years. This is still the subject of speculation, and more research is required, with many more years of data, to discern real, repeatable trends. But one thing is fairly certain: urbanization, suburban sprawl — cities expanding outward — have created more high-cost targets for tornadoes to hit. What was farmland 10–50 years ago is now subdivisions and shopping centers, so we have inadvertently increased the potential for tornado disasters.

There is no shortage of weather apps, web pages and powerful radar programs for home enthusiasts, but companies need real-time, actionable storm data, to lower risk for employees, vendors and customers — as well as optimizing supply chains and operations for whatever Mother Nature throws at them. The technology is remarkable, but there is still a need for interpretation; people providing meaning, perspective, context and analysis — all things a smart computer can’t do.

At least not yet.