Weather and Climate Disasters Are Increasing Across the U.S. 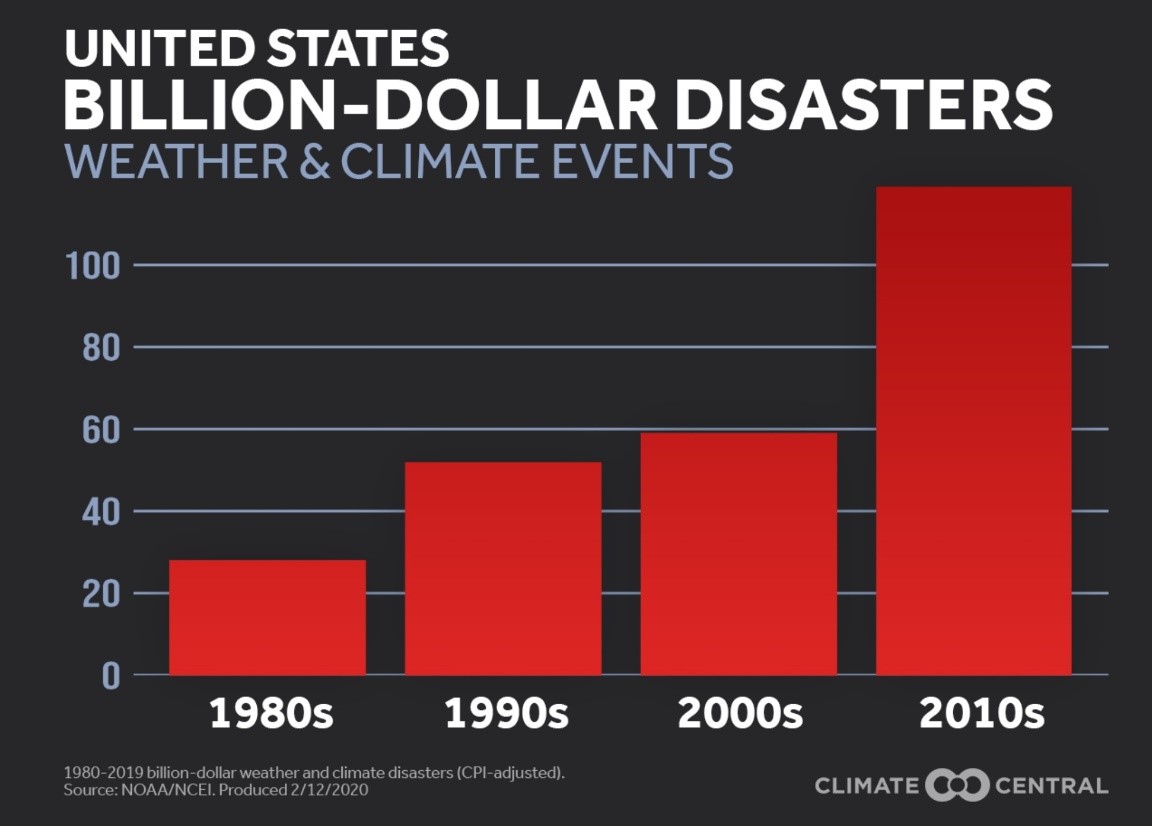 Many days the news headlines sound like a movie trailer for The Apocalypse. For many years I’ve wondered if media and social media are merely doing a better/faster job of reporting weather extremes that have been fairly constant over time, or is a warmer, wetter, more volatile atmosphere loading the dice in favor of more meteorological mayhem? Billion-dollar weather disasters have roughly tripled since 1980. Don’t believe me? Compare a recent insurance bill from something you paid 20 or 30 years ago. All of us are paying a price for an uptick in extreme weather. Is this a cosmic coincidence? How many of these natural disasters are, in fact, natural?

Are more people living in risky areas prone to disaster, next to rivers threatened by flooding, and along coastlines in the path of hurricanes? Yes. But something else is going on, too. Insurance companies report that weather-related losses have tripled since the 1980s, from an average of $10 billion to nearly $50 billion every year[1]. Geophysical risks like volcanoes and earthquakes are holding nearly steady over time, but flooding, hurricanes, heat-related fatalities and wildfires are all increasing at a statistically significant rate. 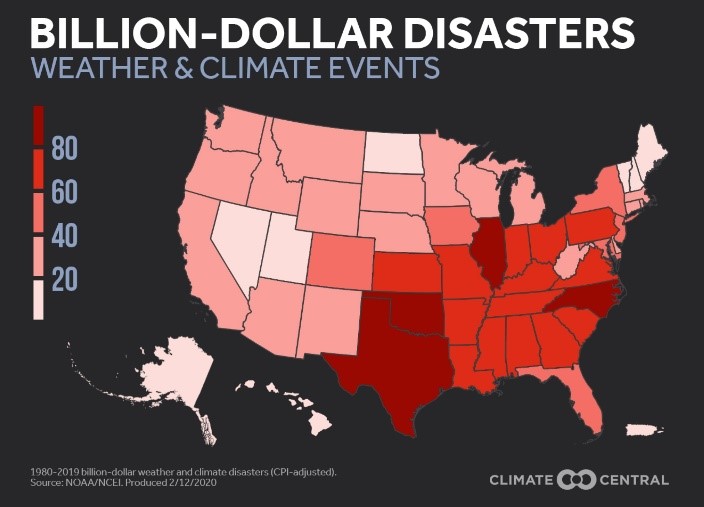 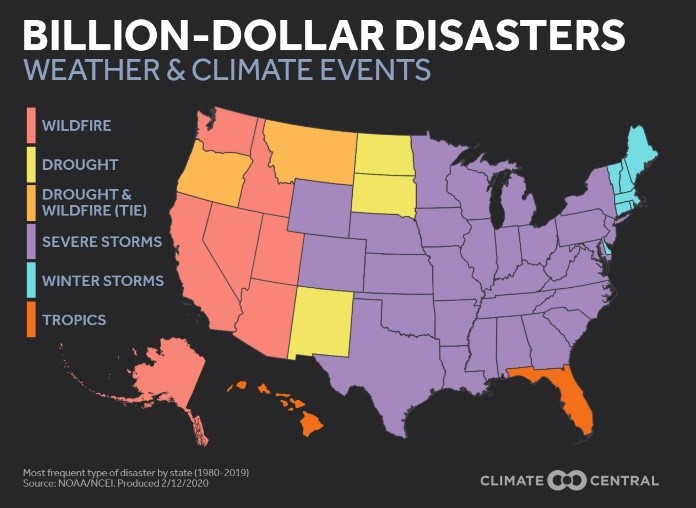 According to Climate Central, of the four decades since NOAA data began, the 2010s accounted for nearly half the total number of disasters and cost, even after adjusting for inflation. The 2010s had 119 billion-dollar disasters (double the previous decade), with total costs exceeding $800 billion. The most billion-dollar weather and climate disasters since 1980 have impacted Illinois, North Carolina, Oklahoma and Texas. As a general rule of thumb, the costliest disasters increase as you travel south and east across the USA, where geography is destiny, and the weather forecast often includes severe thunderstorms, tornadoes, floods and hurricanes.

Droughts are becoming more prevalent, lasting longer, impacting more people. Warming triggered by human emissions is thought to have intensified the disastrous 2011 to 2014 California drought by 15 to 20 percent; by some estimates the worst dry spell in twelve hundred years[1]. Fires are bigger, burning longer and hotter, in fact the number of large wildfires in the U.S. has nearly doubled since the 1980s, and the average length of wildfire season has grown by more than two months.[2]

An estimated 93% of the additional greenhouse gas warming is going into the world’s oceans. Rainfall rates and amounts from tropical systems are increasing – deeper layers of warmer water available to fuel rapid hurricane intensification before landfall, like “Katrina” (2005) and “Michael” (2018). How much of the observed increase in billion-dollar disasters can be attributed to climate change, versus changing demographics? Roughly 40 percent of the US population—about 123 million people—lives in coastal counties, at risk of hurricanes. Millions more live near rivers and creeks, at the mercy of increasingly biblical rains falling upstream. 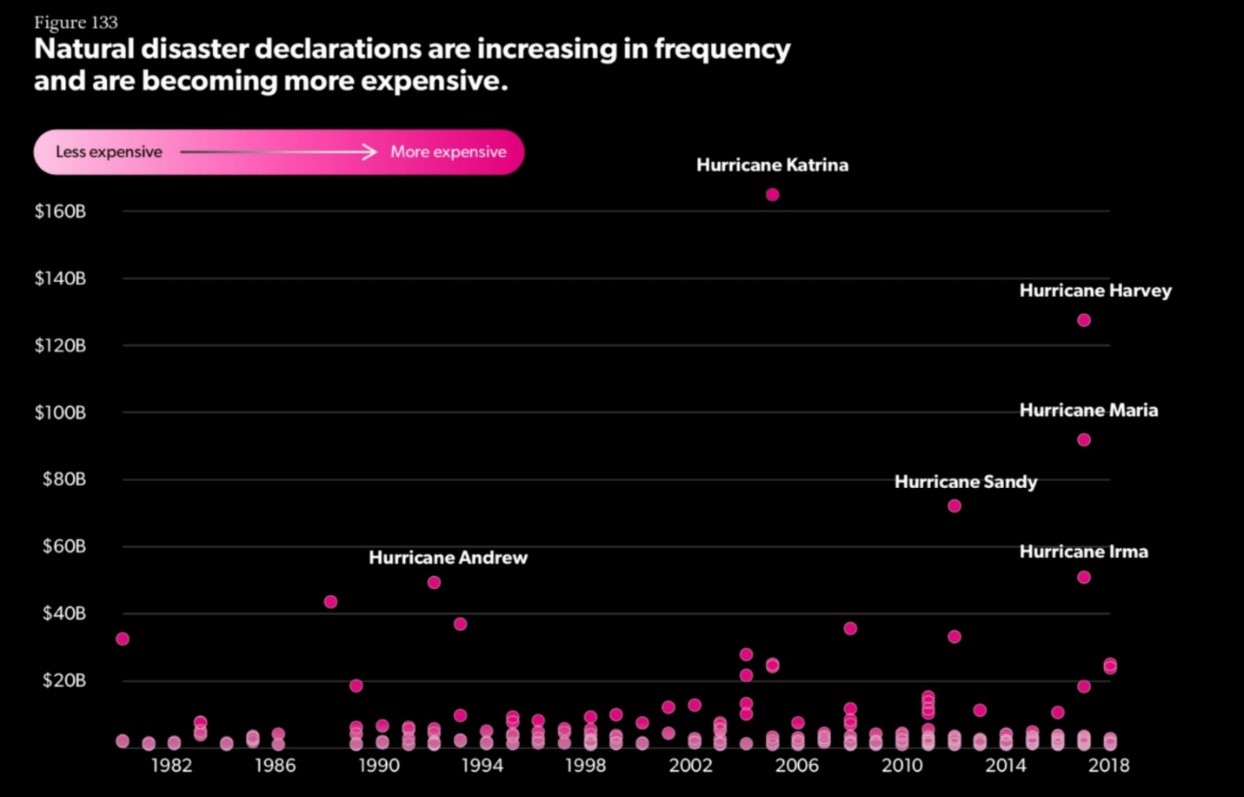 Climate models project an increase in the average precipitation rate of hurricanes as a result of global warming. Hurricane Harvey, the most extreme weather event of the decade from 2010 to 2019[1], dumped over 60” of rain east of Houston in 2017. Researchers have concluded that a repeat of rainfall this intense is predicted to happen only once every 9,000 years.

Many factors are in play, according to Dr. Kevin Trenberth, Distinguished Senior Scientist, Climate Analysis Section, at the National Center for Atmospheric Research in Boulder, Colorado. “Improved building codes and storm warnings have worked in the other direction to greatly reduce damage and lives lost” he explained in an e-mail. “Both ends of the water cycle are profoundly affected by global warming. Hence, many of the disasters, from drought, flooding, wildfires, and heatwaves, in addition to stronger storms fueled by atmospheric moisture, are increasing.”

According to Trenberth, the atmosphere can hold about 7% more moisture per degree C (4% per degree F). The upper oceans are warmer by 1F, so there is 5 to 15% more moisture in the atmosphere now, versus before 1970, leading directly to an increase in heavy rainfalls by that same amount. Warming is a force-multiplier. The extra fuel (latent heat) in storms can easily double the 5 to 15% increase in rainfall. Attribution studies have documented increases of 10 to 30% – with the biggest rainfall increases within tropical storms, according to Trenberth. Increasingly, warming is turning the sky overhead into a super-soaker. 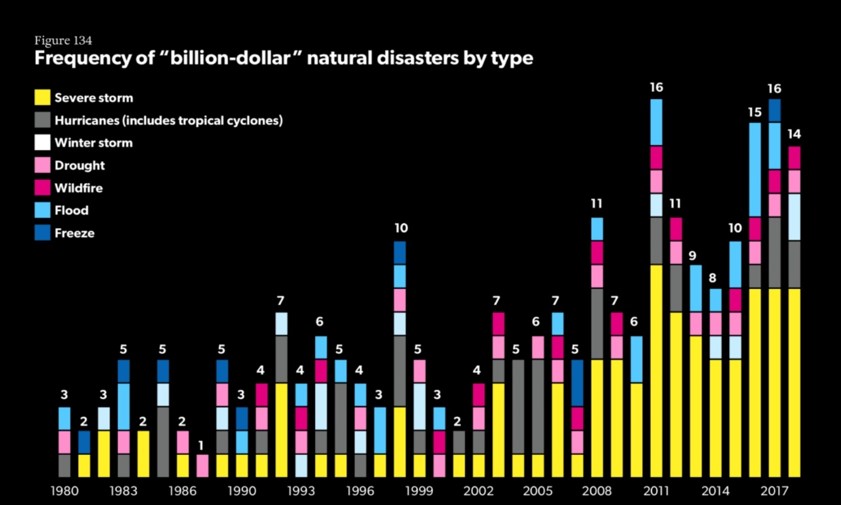 Troubling trends in disaster frequency and expense are counterbalanced by advances in technology: improved warnings, Doppler radar, more advanced weather satellites, drones, even crowd-sourced weather. The public now has a myriad of TV channels, web sites and smartphone apps to choose from for day to day weather forecasts and extreme weather notifications. Social media has made it harder to find trusted sources, but most would agree there’s no shortage of weather information.

A third of all business in the United States is directly weather-sensitive. Changes in weather can impact production, staffing, transportation and supply chains. A single storm can set companies back weeks, even months. Situational awareness is critical, understanding how extreme weather will impact facilities, operations and supply routes. Will employees be able to get to work? How can risk to life and property be minimized, no matter what Mother Nature throws at us?

Increasingly, companies are turning to cost-effective weather APIs to fuel their internal reporting systems, matching approaching weather threats with facilities and transportation routes. Once the scale of the risk becomes more definable, proactive steps can be taken to safeguard staff and harden infrastructure. Companies like Trimble leverage current and future weather conditions for each facility to keep clients updated in real time. Because nobody likes unpleasant surprises. 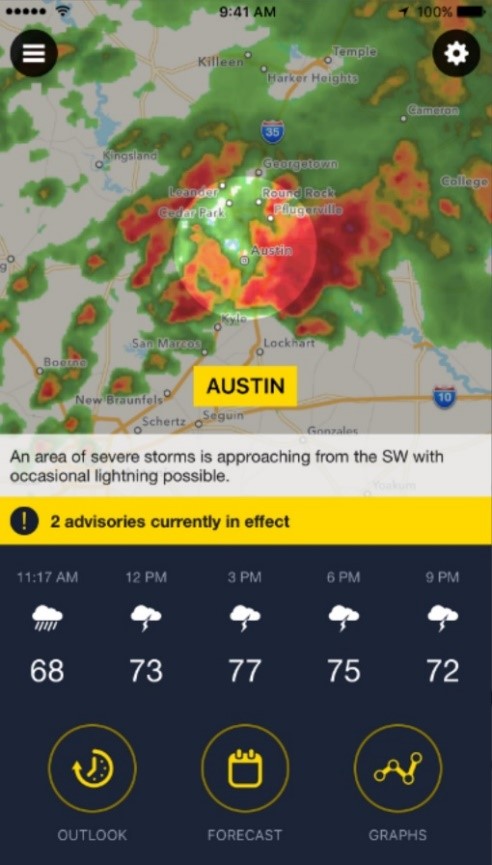 Wells Fargo created a custom weather application for smartphones, so executives can map severe weather threats to their facilities – and consult standard operating procedures on a mobile device in real time. Because when disaster strikes, odds are pretty high you won’t be stuck in front of a desktop or laptop. Once a manager has a better feel for scope and severity of the risk, procedures can be initiated to better protect staff, vendors and customers. 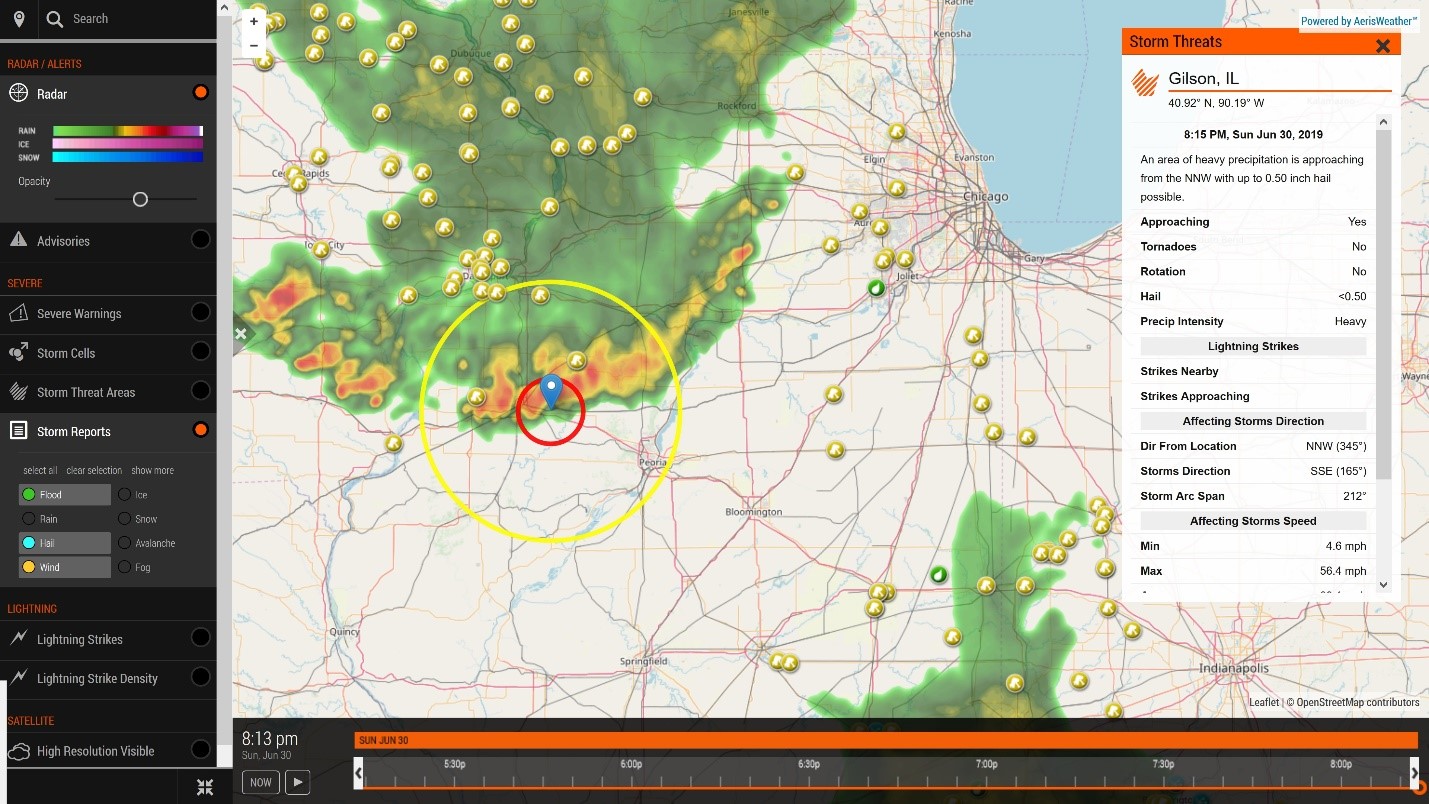 Several things can be true at once. More Americans are living in high-threat areas, close to bodies of water prone to overflowing. A denser, better-trained network of weather spotters is reporting weather extremes with greater specificity and confidence. And a warmer atmosphere is priming the pump, increasing the odds of rolling sevens. Weather-on-steroids sounds menacing, but it’s one way of describing the uptick in headline-grabbing weather and climate events. A warmer atmosphere isn’t initiating these storms, floods and fires. But once they get going, odds are they’ll be bigger, longer lasting, with more cost and disruption from a warmer, wetter sky above our heads.

The extended outlook calls for building resilience: new methods, materials and warning technologies to better prepare consumers and businesses for more extremes, in an age of increasingly super-sized weather.

Paul Douglas is co-author of “Caring for Creation: An Evangelical’s Guide to Climate Change and a Healthy Environment”, and co-founder and Chief Meteorologist at AerisWeather, located in Minneapolis Minnesota.