Pandemic May Be Impacting Forecast Accuracy

Meteorology is not an exact science, like economics, foreign policy and dating. Predicting any future state of the atmosphere depends on how well we can capture fluid dynamics within a weather model, and the accuracy and frequency of data powering that model. Think low-octane vs. high-octane fuel.

Right now we may be using the cheap stuff. The pandemic has impacted the airlines with fewer flights, and that means less upper-air data flowing into the simulations we rely on to have a prayer of getting the forecast right. Couple that with what’s now predicted to be the busiest tropical season in recent memory and you have cause for concern. 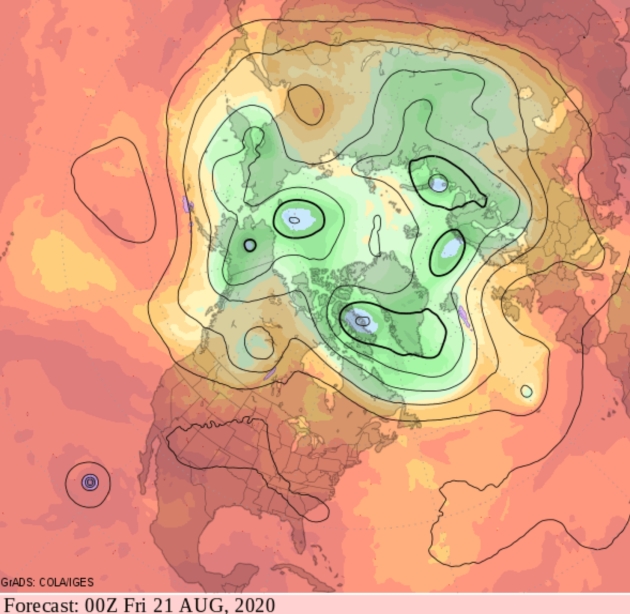 Hotter Than Average Latter Half of August? We got off to a relatively cool start, but models hint at a warm middle and end of August with a nearly stationary bubble of high pressure over the central USA keep Minnesota and most of the USA warmer than average.

“Extremely Active” 2020 Tropical Season – Colorado State University. Fox News has details: “…The latest outlook from CSU calls for 24 named storms, 12 of which are expected to become hurricanes, and five becoming major hurricanes, which are Category 3 or higher with winds greater than 110 mph. “We have increased our forecast and now call for an extremely active 2020 Atlantic hurricane season,” CSU researchers said on their website. “Sea surface temperatures averaged across the tropical Atlantic are much warmer than normal, and vertical wind shear is well below average...”

NOAA Agrees: Elevated Tropical Risk in 2020. Here’s an excerpt of an update from NOAA: “...A comprehensive measure of the overall hurricane season activity is the Accumulated Cyclone Energy (ACE) index, which measures the combined intensity and duration of all named storms during the season. Based on the ACE projection, combined with the above-average numbers of named storms and hurricanes, the likelihood of an above-normal Atlantic hurricane season has increased to 85%, with only a 10% chance of a near-normal season and a 5% chance of a below-normal season. “This year, we expect more, stronger, and longer-lived storms than average, and our predicted ACE range extends well above NOAA’s threshold for an extremely active season,” said Gerry Bell, Ph.D., lead seasonal hurricane forecaster at NOAA’s Climate Prediction Center...” 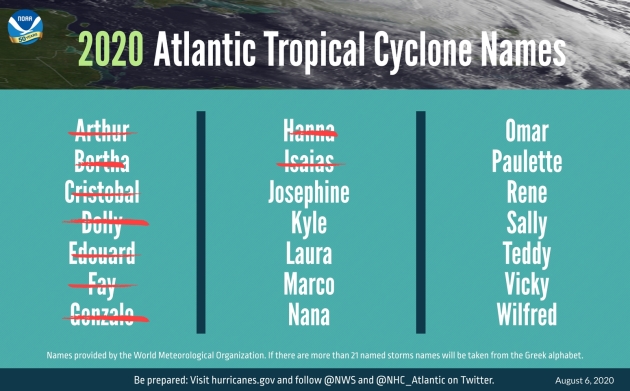 2020: Will We Need Greek Alphabet to Name Storms? Capital Weather Gang weighs in: “…About 95 percent of hurricanes and major hurricanes form from August to October, National Weather Service director Louis Uccellini said during a news conference call. Uccellini said this is one of the most active hurricane outlooks NOAA has ever issued. It would take only 21 named storms before all the names on the Atlantic list, determined ahead of time by the World Meteorological Organization, are exhausted and forecasters would turn to the Greek alphabet. This happened only once before, in 2005, a devastating season that was the most active on record…”

We’re Gonna Need A Bigger Alphabet: Climate Nexus has headlines and links: “The 2020 hurricane season is now expected to be the most active since at least the early 1980s, meteorologists at Colorado State University, a standard bearer for seasonal hurricane predictions, announced Wednesday. The revised estimates predict the 2020 season will see 24 named storms, including 12 total hurricanes and 5 major hurricanes. Each of those predictions are about double that for a normal season, and include storms that have already occurred. 2020, which has already set numerous records for its early activity, still has about 90% of the official season ahead. Even if 2020 sees fewer storms than the new prediction — which is the most dire in CSU’s 37-year history — officials may still run out of letters with which to name storms and be forced to use the Greek alphabet for overflow since the letters Q, U, X, Y and Z are not used. The only other time officials were forced to use the Greek alphabet was 2005 which included five hurricanes (Dennis, Katrina, Rita, Stan and Wilma) so destructive their names have been retired from future use.” (Weather Channel, The Hill, CBS, USA Today, News4JAX, WYFF4, WFLA, WMBF; Climate Signals background: 2020 Atlantic hurricane season)

The Reason Dogs are Terrified of Thunderstorms – and How You Can Help. It makes more sense now, after browsing a post at Mental Floss: “…Many dogs are distressed by unexpected loud noises—a condition known as noise aversion, or noise phobia in more severe cases—and sudden thunderclaps fall into that category. What separates a wailing siren or fireworks show from a thunderstorm in a dog’s mind, however, is that dogs may actually realize a thunderstorm is coming. As National Geographic explains, not only can dogs easily see when the sky gets dark and feel when the wind picks up, but they can also perceive the shift in barometric pressure that occurs before a storm. The anxiety of knowing loud noise is on its way may upset your dog as much as the noise itself...”