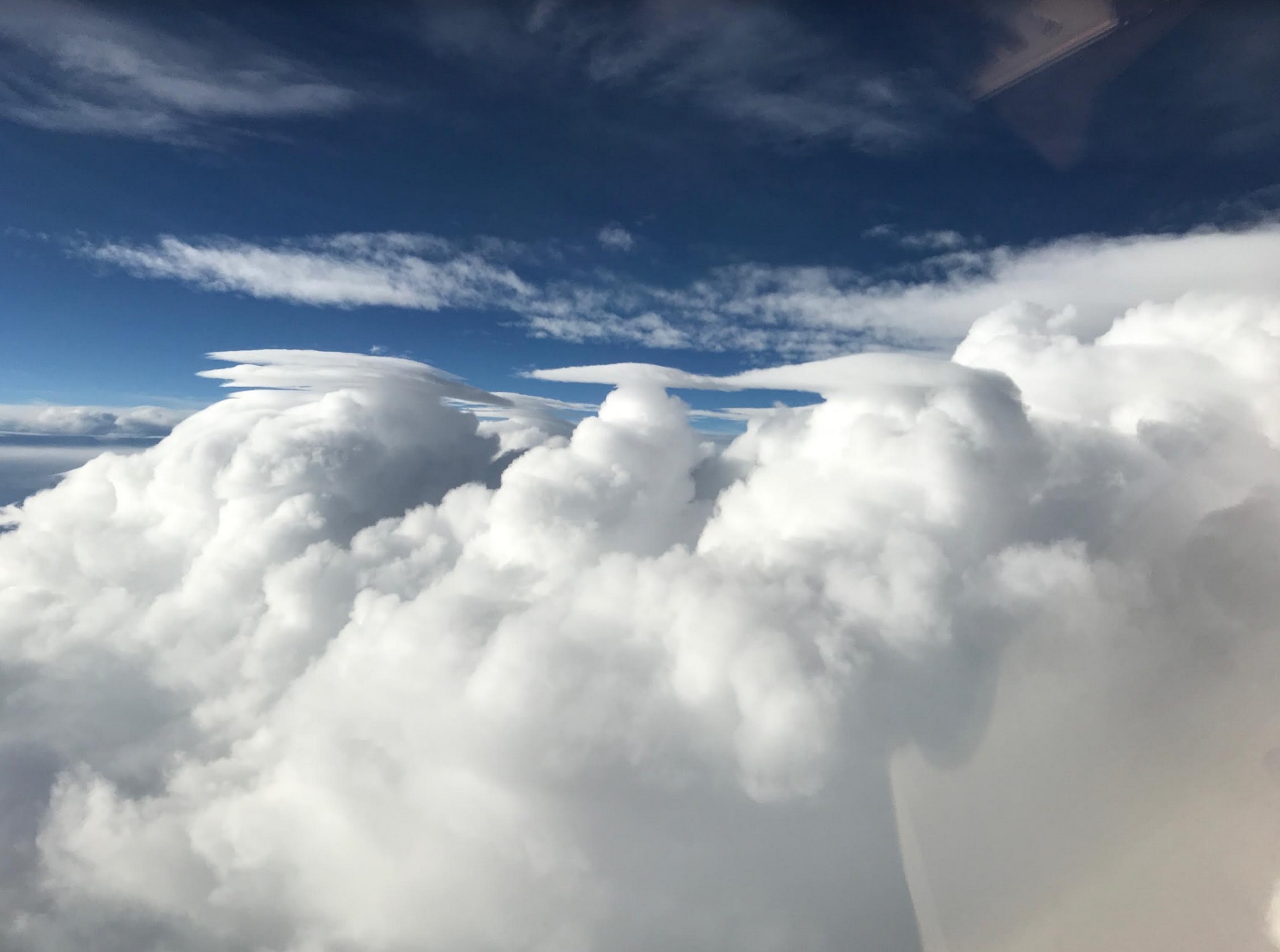 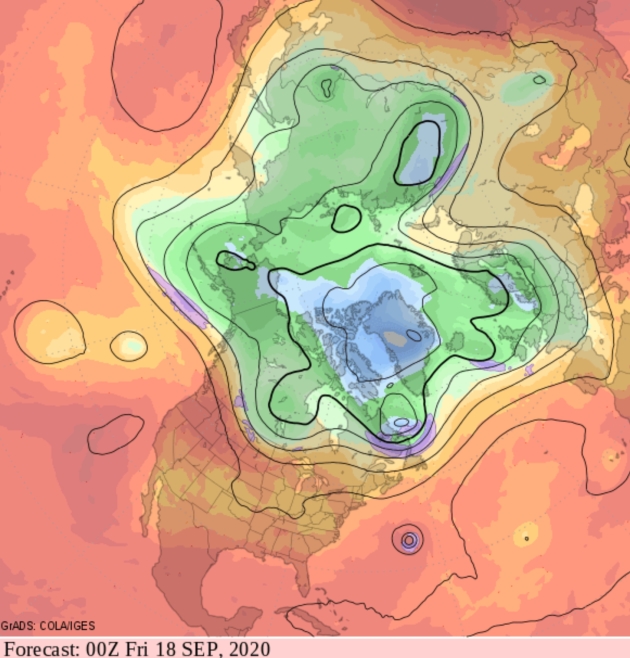 Moderately Cool Third Week of September. Temperatures over the northern tier of the USA will be cooler than average 2 weeks out, if you buy the GFS solution above. We’ll see more warm fronts, more 70s and 80s into late September, but while much of the south and west sizzles Minnesotans will be reaching for sweatshirts much of the next 2 weeks.
Definition of a Cold Front. I’m sure this has happened before, but I can’t remember anything quite this drastic in recent years; a nearly 65 degree drop in the span of 2-3 days? ECMWF (above) for Denver is unlike anything witnessed. Oh, it may snow in Denver with early skiing for Colorado resorts. So there is that. Meteogram: WeatherBell.

Excessive Heat Warnings. Excessive heat concerns are developing into the Labor Day weekend across the Southwest, with numerous record highs expected across the region. Excessive Heat Watches and Warnings stretch this morning from northern California to southern Arizona. Highs will be in the 90s and 100s and this heat (especially this extended stretch of heat) could lead to heat related illnesses for those working outside or participating in outdoor activities. Here are when these Excessive Heat alerts are in place across portions of the region as well as expected highs into the weekend: 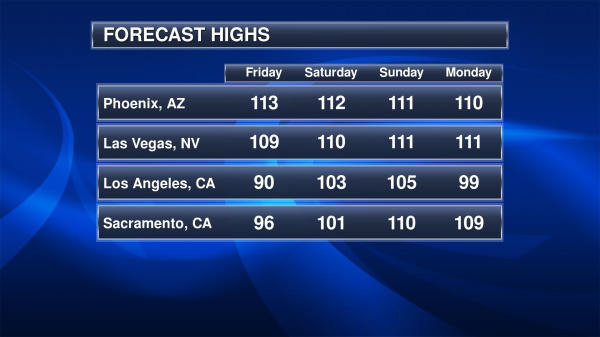 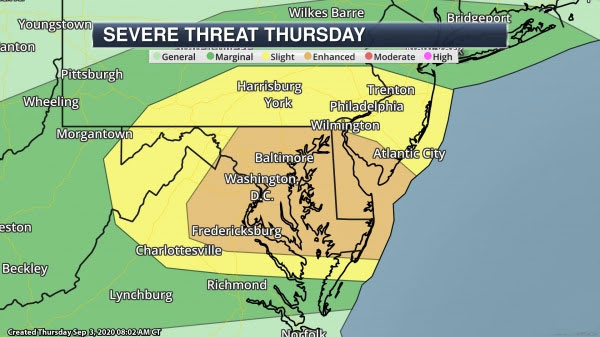 Severe Threat Today. There is an Enhanced severe risk across portions of the Mid-Atlantic – including Washington D.C. and Baltimore – as we head through Thursday. Damaging winds and a few tornadoes are the main threats across the region as storms pop up this afternoon into the evening hours. 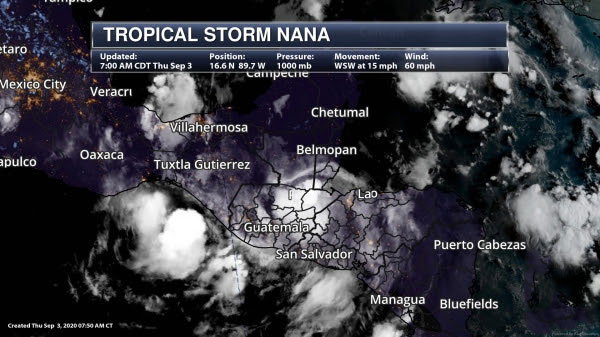 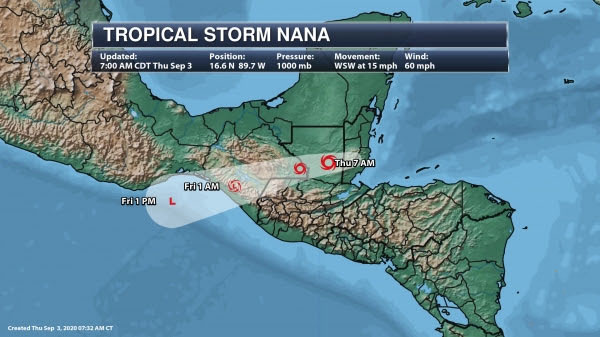 Nana Weakening. Nana strengthened into a hurricane before landfall overnight on the Belize coast between Dangriga and Placencia. Nana continues to move inland this morning and weaken, positioned over northern Guatemala as of the 7 AM CDT update. Rapid weakening will continue today, with the system likely becoming a remnant low Friday as Nana moves west-southwest. 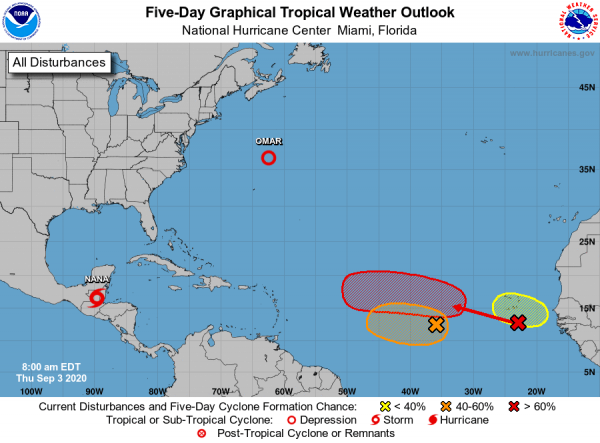 Omar And Tropical Waves. We are also tracking several other areas of interest in the Atlantic. Tropical Depression Omar continues to not be a concern to land, fighting stronger upper level winds northeast of Bermuda. Omar should become a remnant low today or tonight. We are also tracking three different areas back toward the central and eastern Atlantic that have varying chances of becoming tropical systems in the next five days. The system that has the greatest chance in the next five days is one off the coast of Africa that has low chances over the next two days but has a high chance as we head into early next week across the central Atlantic. We will keep an eye on these waves as we head through the next several days. 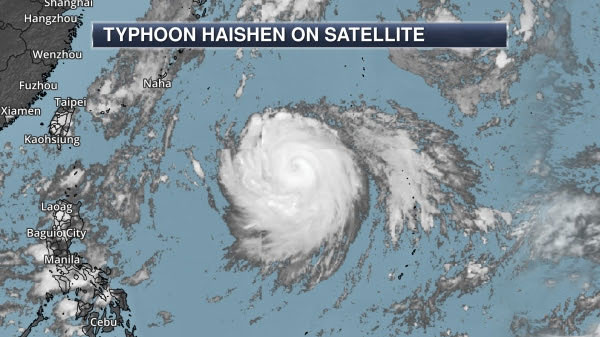 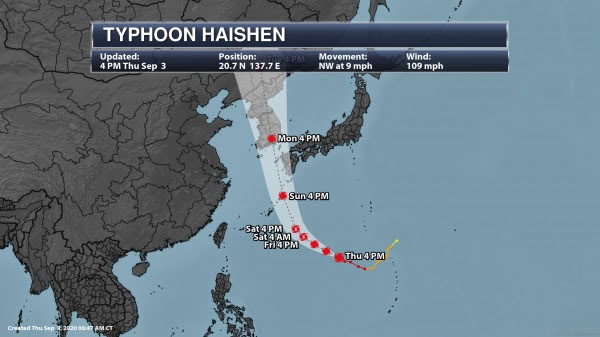 Tracking Haishen. Maysak made landfall early Thursday morning in South Korea with peak winds of 45 m/s (100 mph) quickly moving north. With that storm through the region, eyes turn to the next system in Typhoon Haishen. As of Thursday afternoon, Haishen was located about 745 miles east-southeast of Kadena Air Base and moving northwest at 9 mph. The system had 110 mph winds – the equivalent of a high-end Category 2 hurricane. It will continue to strengthen into the weekend, becoming a Super Typhoon at its peak with winds of 150 mph Saturday. Weakening should occur thereafter as it continues to move in a northwesterly direction, reaching the southern coast of South Korea Monday afternoon with wind speeds of 100-105 mph. This storm would bring another round of heavy rain and strong winds to the region late this weekend and early next week.

Can a Bubble Net Stop a Hurricane? Some Norwegians Think So. Color me skeptical. And let’s hold off on nuking hurricanes, for now. Here’s a clip fro WIRED.com (paywall): “…The latest scheme—this one from Norway—proposes stretching a submerged “bubble net” across the path of an oncoming storm. To OceanTherm CEO Olav Hollingsæter, a hurricane’s swath of destruction could be slowed or even avoided using a technique that has kept Norwegian fjords ice-free since the late 1960s. Imagine a long, thin, flexible pipe stretched between two ships. The pipe is moored a few hundred feet below the surface, like an upside-down shower curtain. A massive stream of bubbles escapes from the pipe, forming a frothy white current as it rises to the surface. That might give you an idea of what the creators of this project are envisioning. (Or perhaps just think of a giant aquarium bubbler.)…”

Predicting Peak Fall Foliage. This is different, a tool to predict (based on historical data) when peak color will come across the USA. Details via Mental Floss: “...Fall foliage normally peaks some time after the autumnal equinox, which falls on September 22 in 2020, but exactly when depends on variables like rainfall and temperature. Each year, the tourism website SmokyMountains.com looks at weather forecasts and historical trends from NOAA and puts together an interactive map showing when foliage is predicted to peak across the contiguous U.S…”