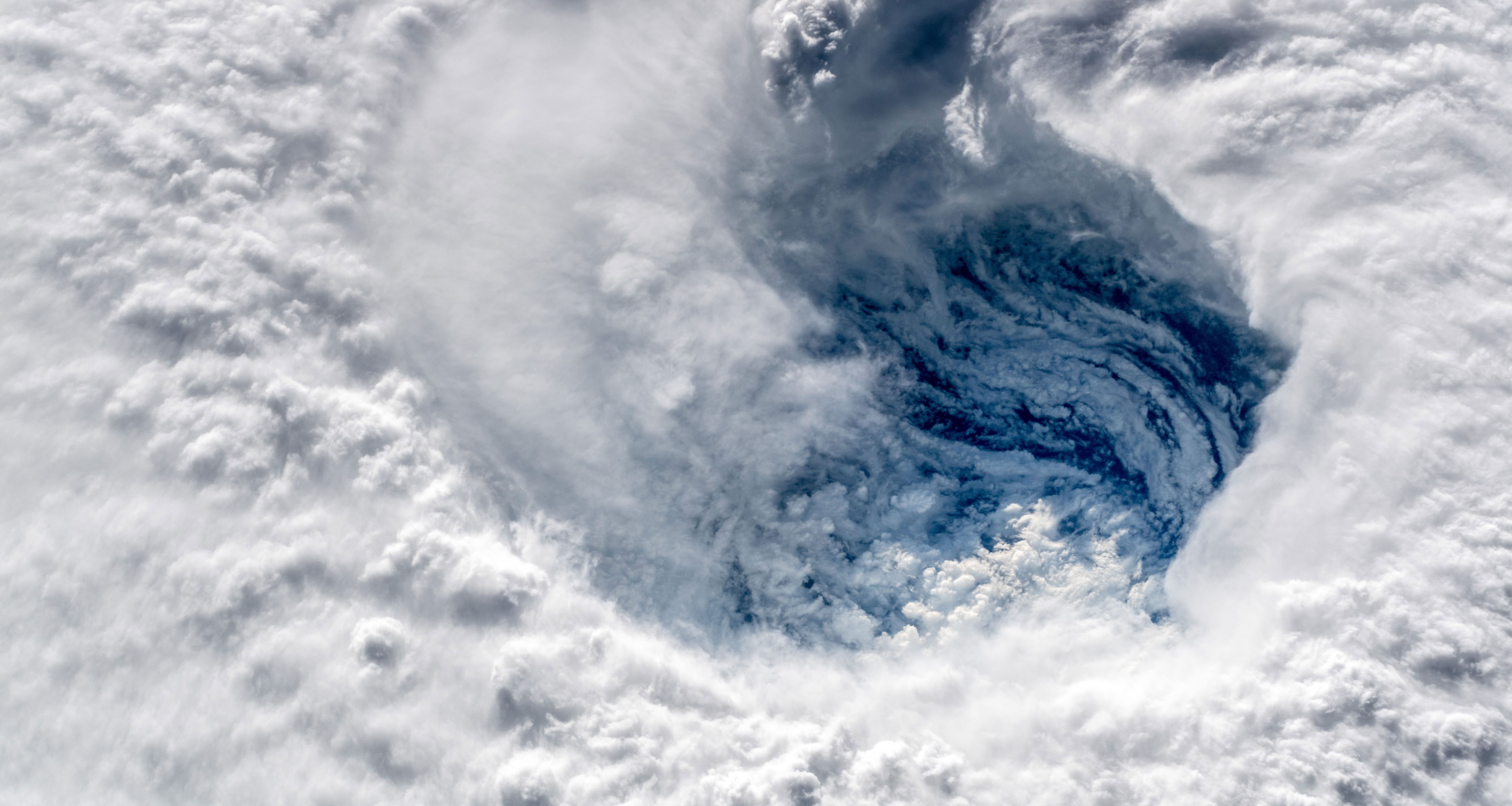 The Dominance of Chaos. An accurate forecast 4 months into the future? Don’t hold your breath. At the end of the day meteorologists are up against chaos theory, as a story at Mashable explains; here’s an excerpt: “…Yet, there’s a limit on how far into the future humanity can ever predict the day-to-day weather: Will a storm probably hit my town? Will it be a terrible day for a barbecue? Will driving be too dangerous? The absolute limit on this type of weather prediction is somewhere between two and three weeks, said Falko Judt, a research meteorologist at the National Center for Atmospheric Research. Even the relentless march of technology — with ever faster, better, smarter computers — cannot push beyond this boundary. “It’s the natural limit,” said Judt, who in 2018 tested the limits of weather prediction on a supercomputer running sophisticated algorithms to simulate Earth’s atmosphere. “It’s inherent to the atmosphere,” explained Judt. “It’s something that is set by nature itself...” 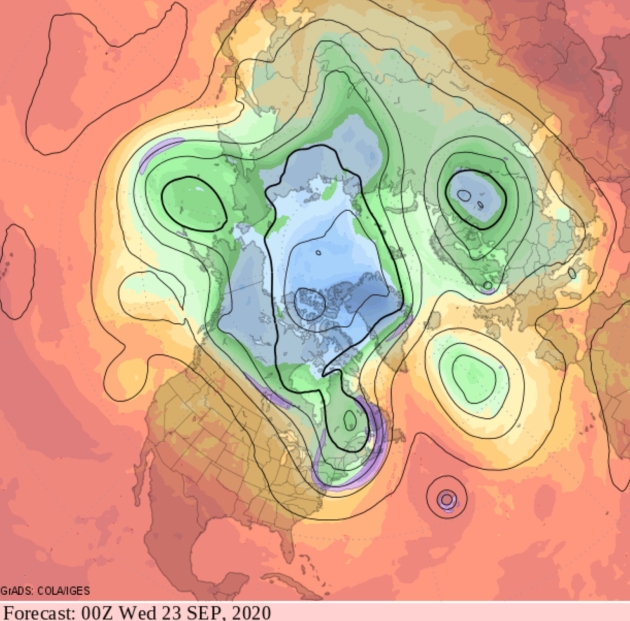 Mild Finish to September? The atmosphere has a way of self-correcting. An unusually chilly start often (but not always) is balanced by the weather pendulum swinging in the opposite direction. The GFS model (above) has been inconsistent with the 2-week 500mb forecast heights, but the solution above would suggest near-normal temperatures as we sail into the last week of September. I hope it’s right. 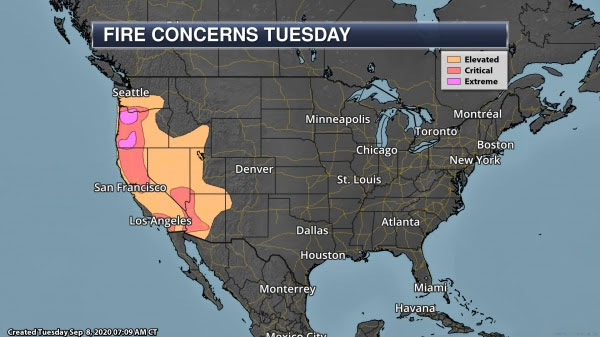 Extreme Fire Danger Today. A closed low across the Intermountain West along with troughs along the West Coast and Desert Southwest are causing a tight pressure gradient across portions of the western United States today. This is leading to strong winds, which, in combination with very dry fuels across the region and low humidity are leading to at least critical fire conditions. Across portions of the Pacific Northwest, including in the Portland and Medford areas, an Extreme Fire Danger is in place today due to these conditions and multiple large fires already ongoing across the region. Rapidly moving wildfires are expected. 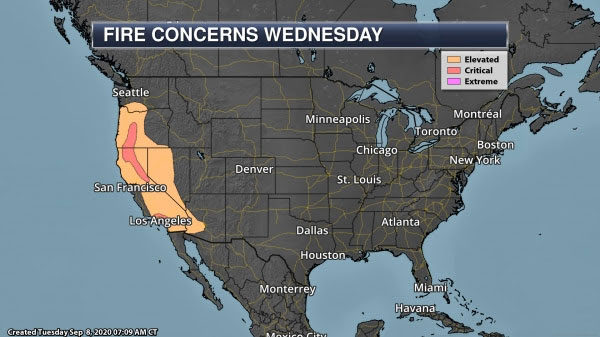 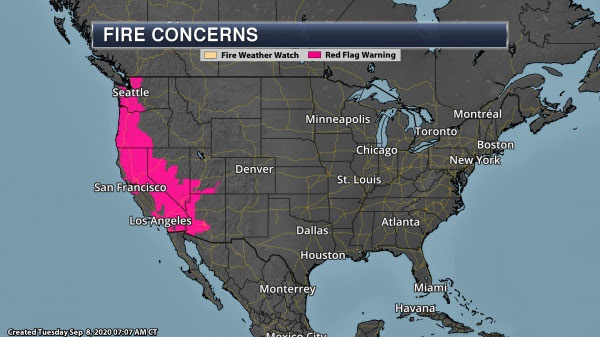 Get more information on wildfires burning out west from:

Winter Storm Warnings. That same closed low across the Intermountain West helping to create fire weather concerns is also bringing cold air and a September snowstorm across the Rockies into the Front Range over the next couple of days. Winter Weather Advisories and Winter Storm Warnings are in place across the region, including in the following areas: 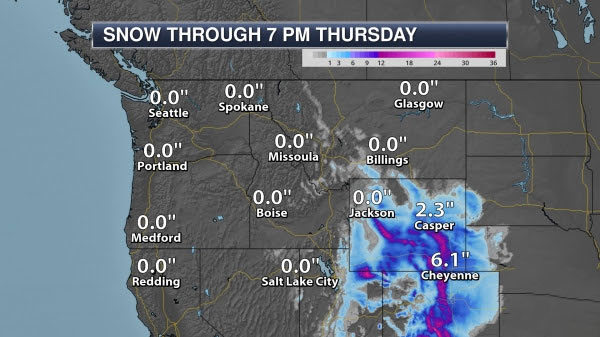 Additional Snow Forecast. The heaviest snow will fall in the mountains at higher elevations where over a foot could be possible. The heaviest snow in Cheyenne will fall during the daytime hours today, tapering off tonight (especially after midnight). The highest chance of accumulating snow in Denver will be from this afternoon through the morning hours Wednesday. 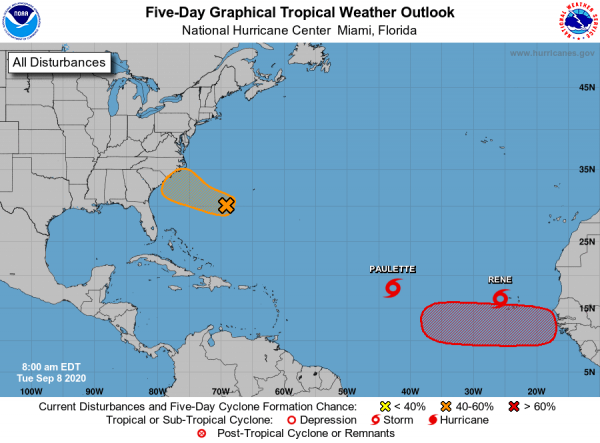 Paulette, Rene, And Tropical Waves. As we look at the Atlantic, we are tracking two named system out in the central and eastern Atlantic. Tropical Storm Paulette poses no threat to land over the next five days as it continues to move west-northwest to northwest. Tropical Storm Rene is moving across the western Cabo Verde Islands and will continue to produce tropical storm force winds and heavy rain across the islands today. It should strengthen into a hurricane later this week, but curve northward and not be a threat to land once it moves past the Cabo Verde Islands. We are also tracking an area of low pressure about 300 miles west-southwest of Bermuda which has showers and thunderstorms but remains disorganized. There is about a medium chance (40%) this area of low pressure could form into a tropical depression as it approaches the Southeast U.S. coast in about two to three days. Meanwhile, another tropical wave will move off Africa by Thursday and has a high chance of formation (70%) in the next five days. Models are keeping whatever comes of this wave farther south, so it will be one to watch heading into next week. 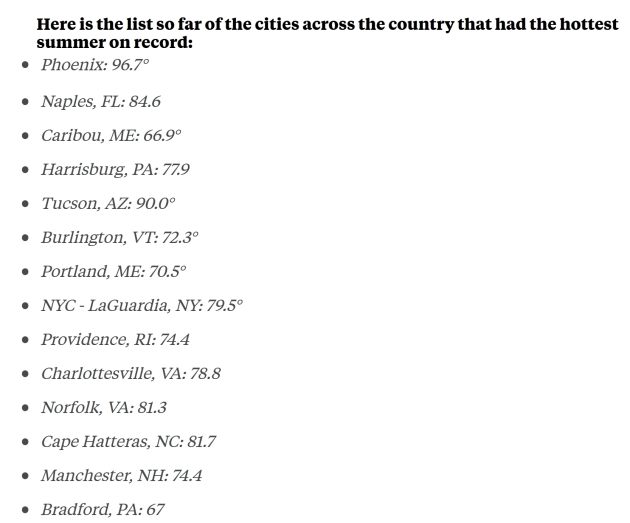 2020 Was Hottest Summer on Record for Dozens of US Cities. ABC News explains: “…Some of the nation’s largest cities recorded their hottest climatological summers on record this year, including destinations like Phoenix, Tucson and Sacramento, according to the National Weather Service. In Phoenix, the country’s sixth-largest city, residents saw average temperatures of about 96.7 degrees — almost 1.6 degrees above the previous summer record, the NWS said Wednesday…Meanwhile, cities like Palm Springs, Las Vegas, Vero Beach, Florida, Flagstaff, Arizona and Sarasota, Florida, saw their hottest August temperatures ever...”

August 2020 Heat: World’s Fourth Warmest on Record. Bloomberg reports: “August 2020 will go down as the fourth-warmest on record worldwide, with above average summertime heat in the U.S. and Mexico tempered slightly by below average temperatures in parts of the Southern Hemisphere. Global temperatures for the month spiked around 0.9 degrees Celsius above the historical average, according to a new report by Europe’s Copernicus Climate Change Service. That reading came in lower than the summers of 2018 and 2019, the agency said in a statement...”

How to Escape From an Erupting Volcano. Because 2020. Here’s an excerpt from WIRED.com (paywall): “Let’s say you were visiting the Roman town of Pompeii on the morning of August 24, 79 AD. And let’s say you arrived sometime between the hours of 9 and 10 am. That should give you enough time to explore the port town and maybe even grab a loaf of bread at the local bakery (see map below for directions). But it would also put you in Pompeii in time to experience a 5.9 magnitude earthquake, the first of many, and watch the black cloud rise from Mount Vesuvius as the mountain began to erupt 1.5 million tons of molten rock per second and release 100,000 times the thermal energy of the bomb dropped on Hiroshima. All while you were standing a mere 6 miles away...”