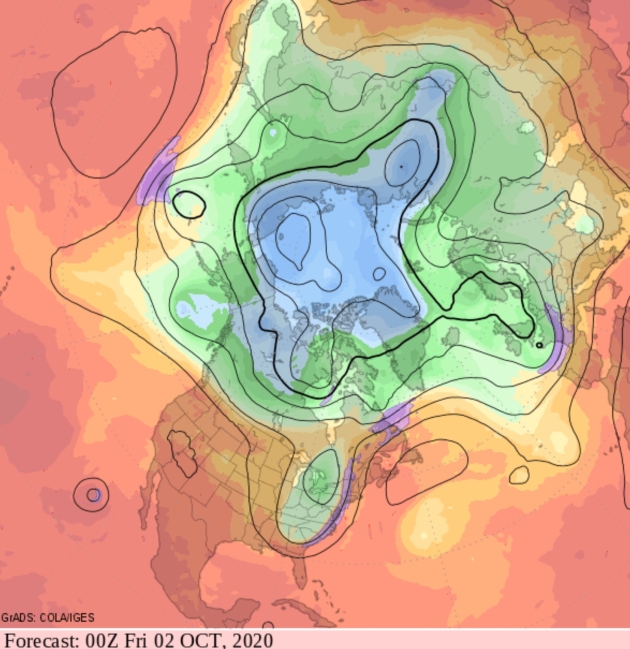 2 Weeks Out – Cut Off Low Out East? Minnesota and the western two thirds of the USA are forecast to run milder than average, with a closed low causing clouds and showers (and cooler than normal temperatures) over much of the east. 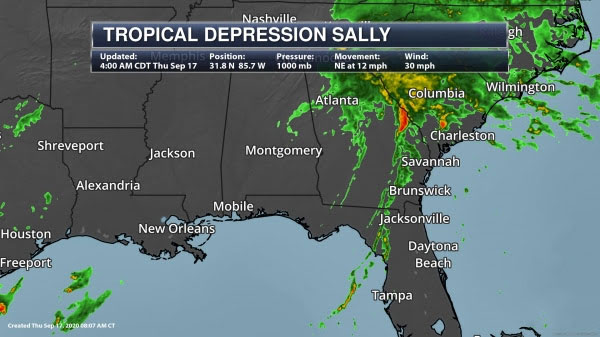 Sally Weakening. While Sally has quickly weakened over the past 24 hours as the system continues to move inland, it is still producing heavy rain across portions of the Southeast this morning. As of 4 AM CDT, the center of Sally was 50 miles southeast of Montgomery, AL, and moving northeast at 12 mph. Sally had winds of 30 mph. 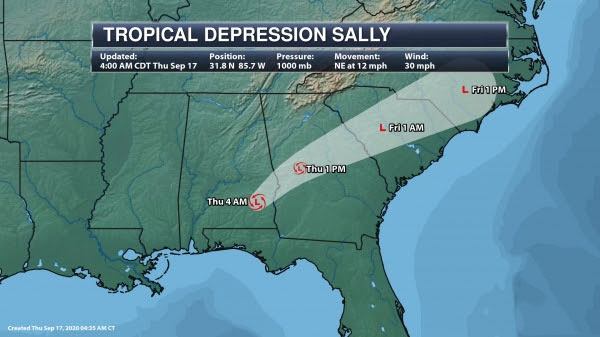 Sally Track. This is the last forecast track that the National Hurricane Center will be issuing on Sally as the system continues to weaken. The center of Sally is expected to be across portions of Georgia by the early afternoon hours and move over the Carolinas late tonight into Friday. Additional weakening is expected, and Sally should become a remnant low by tonight or Friday. 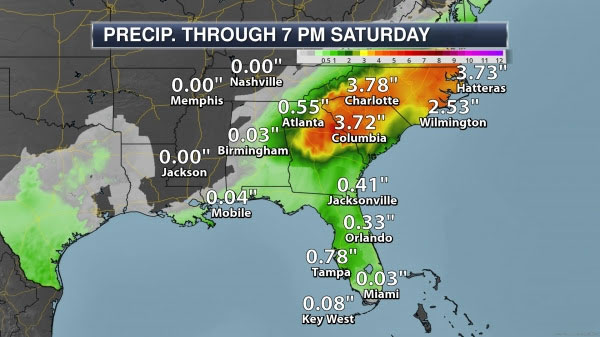 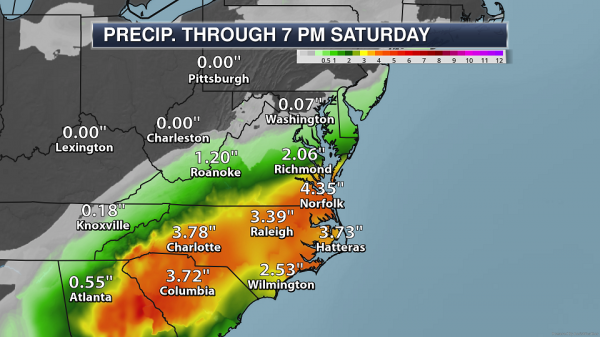 Additional Heavy Rain. The main risk with Sally will continue to be heavy rain across portions of the Southeast and Mid-Atlantic states through the end of the week. Here are expected rainfall totals from the National Hurricane Center:

Flooding Expected. Even as Sally continues to move to the east-northeast across the Southeast today, flooding can still be expected across the Southeast and Mid-Atlantic today with a Moderate Risk of flash flooding in place. In these areas, 3-5” amounts with isolated 8” totals will be possible. 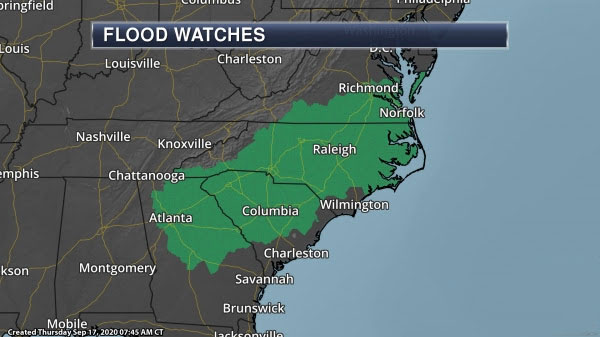 Flood Watches.  Flood Watches continue to extend from Georgia to southern Virginia due to Sally and the expected rain with the system over the next few days. 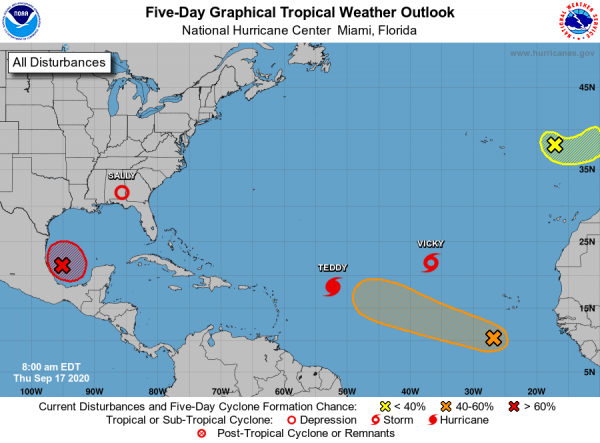 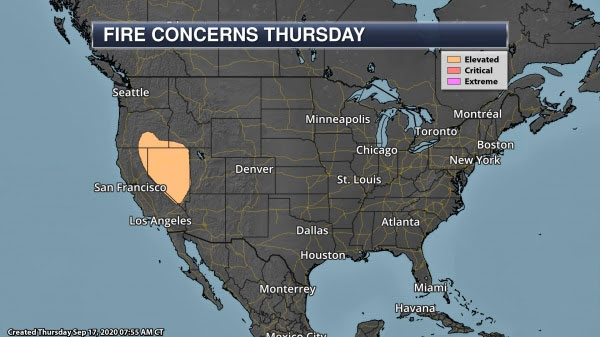 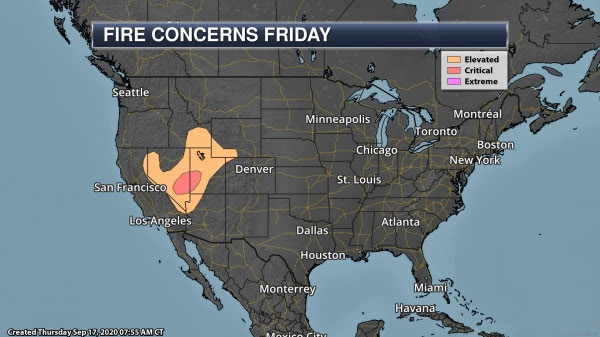 Fire Danger Today And Friday. We continue to track fire weather conditions across the western United States the next couple of days. Today an elevated fire danger is in place from Oregon and California into the Great Bain due to stronger wind gusts in combination with the continuing dry conditions across the region. Stronger winds are possible Friday due to a low deepening in the northern Rockies and ahead of a cold front across portions of Nevada and Utah where a critical fire danger is in place. 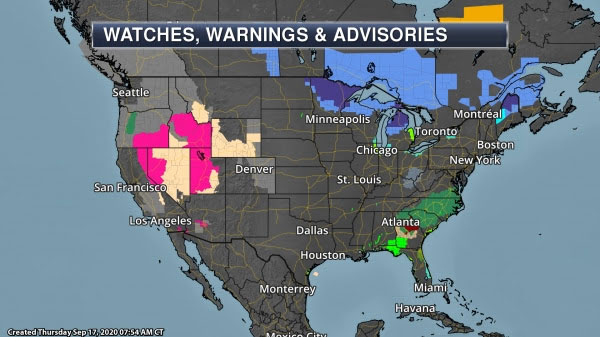 Fire Danger And Air Quality Concerns. Fire Weather Warnings (pink) and Fire Weather Watches (tan) are in place across portions of the western United States due to the fire danger over the next few days.  Air Quality Alerts (gray) remain in place across the western United States due to the smoke from the wildfires reducing air quality across the region. These now stretch as far east as the Front Range. We are also watching Flash Flood Watches today/tonight across portions of Oregon as heavy rain is expected that could cause flash flooding and debris flows in recently burned areas, including around the Riverside, Beachie Creek, Lionshead, and Holiday Farm Fires. 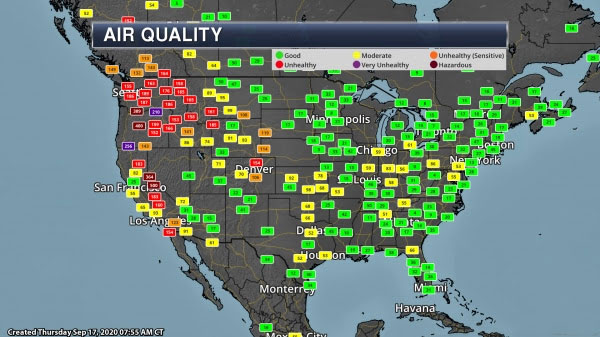 Hazardous Air Quality This Morning. We continue to track unhealthy to hazardous air quality across portions of the western United States due to all the wildfire smoke in the air. 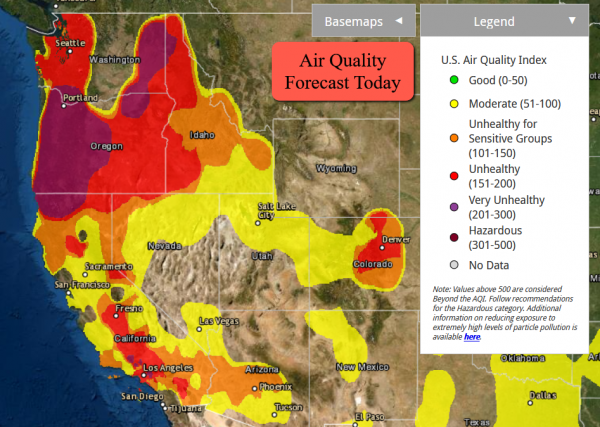 Air Quality Forecast. Unhealthy to hazardous air quality is expected to continue across the region today. Hazardous air conditions will be possible in the Spokane, Portland, Salem, Medford, and Pomona areas.

Warm Enough For Tropical Systems in the Mediterranean Sea. I dread the day a hurricane approaches Rome or Athens. Far-fetched? I thought so, too. Image credit from Thursday: AerisWeather AMP.

Tracking Smoke. NOAA has an online tool that pinpoints fire locations and smoke. Yesterday’s orange sun was a direct result of the massive amount of smoke being thrown off by western fires. 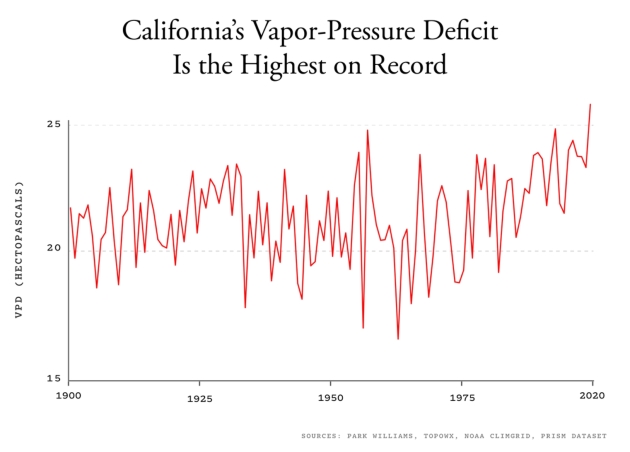 The Most Important Number for the West’s Hideous Fire Season. I did not know this; more analysis from The Atlantic: “...The vapor-pressure deficit indexes two other measurements: the air temperature and the relative humidity. Both measurements affect the air’s sponginess. Hotter air is more likely to bump water into a gas state, while drier air can hold more water vapor overall. The vapor-pressure deficit measures the overlap. “It’s the difference between the amount of water vapor that’s in the air and the amount of water vapor that the air can possibly hold,” Williams said. When the vapor-pressure deficit is high, it means the atmosphere has become an immense, six-mile-high sponge. The arid air will induce water to evaporate from wherever it’s hiding—the soil, the wooden boards of houses, the limbs and leaves of trees and underbrush...”

Graphic credit: “The vapor-pressure deficit in August in California, as calculated by Park Williams.”

5 Ways to Help Victims of West Coast Fires. Mental Floss has some timely links: “Wildfires continue to ravage millions of acres across California, Oregon, and Washington, and strong winds forecasted in some of those regions could aggravate the blazes. To prevent future fires, we need to focus on combating climate change through policy reform and sustainable living. But for people directly affected by the fires, their current needs are much more urgent: food, shelter, and funds. Here are five organizations that can help you help victims...”

“The California Compromise”. Fewer people are California-dreaming these days, due to an accumulation of disasters. The Washington Post (paywall) reports: “…This is the latest iteration of the California Dream, a Gold Rush-era slogan meant to capture the hopeful migration of an old nation to a new, rich West. For generations, the tacit agreement for California residents resembled a kind of too-good-to-be-true deal. Live in the lovely if often drought-plagued Sierra, or beneath the beachfront Pacific Coast cliffs, and work in an economy constantly reinventing itself, from Hollywood to the farms of the San Joaquin to Silicon Valley. But for many of the state’s 40 million residents, the California Dream has become the California Compromise, one increasingly challenging to justify, with a rapidly changing climate, a thumb-on-the-scales economy, high taxes and a pandemic that has led to more cases of the novel coronavirus than any other state...”