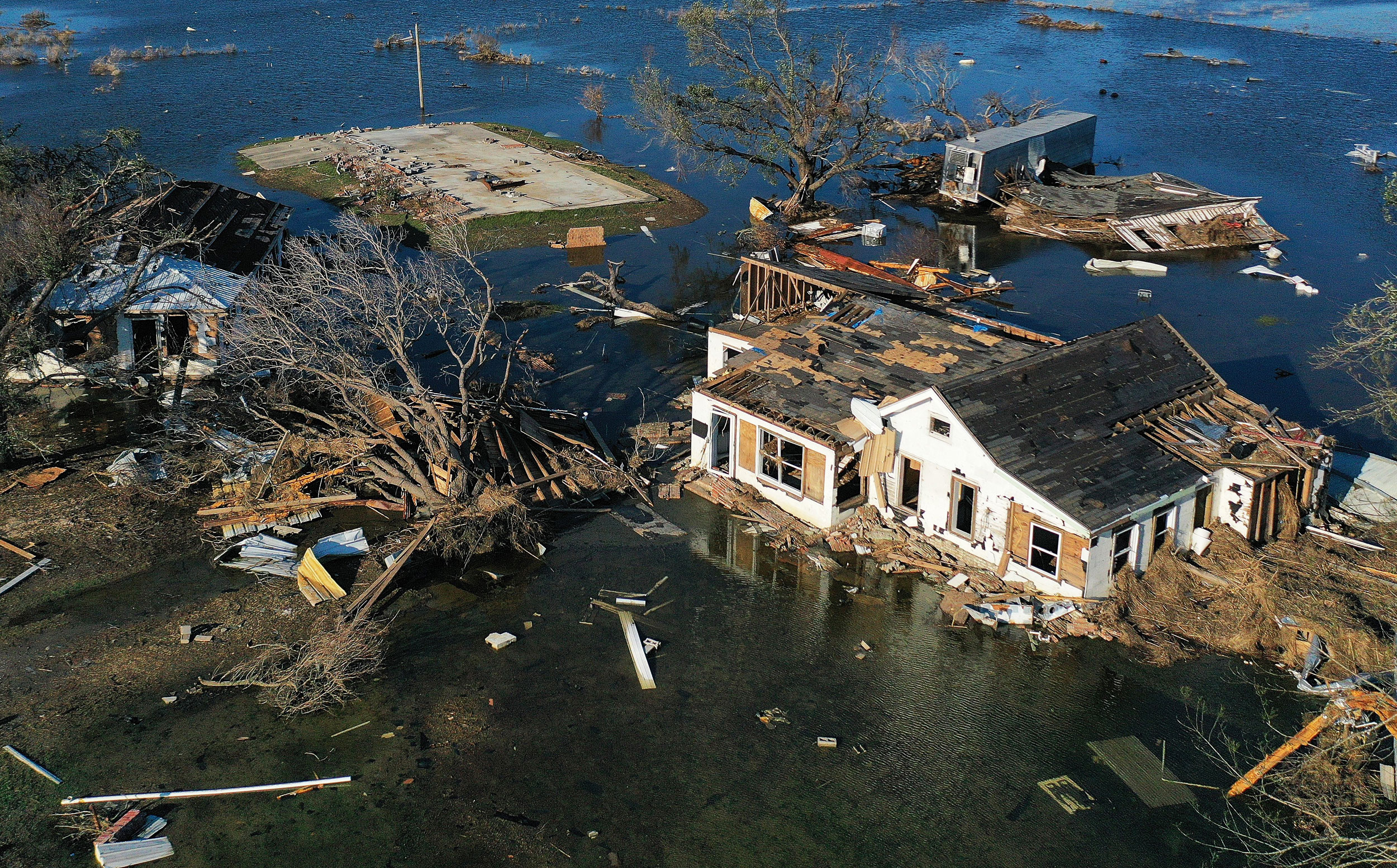 Don’t let anyone living in Louisiana ever give you a hard time about Minnesota weather. Hurricane Delta will be the 6th tropical system in 2020 to impact Louisiana, still recovering from Hurricane Laura’s aftermath in late August.

“Delta” will come ashore along the Louisiana coastline late Friday as a major, Category 3 storm, with sustained winds of 120 mph.

NOAA reports nationwide temperatures ran 2.3F above average since January 1; the 6th warmest such period on record. It’s not a fluke – scientists say it’s a trend. 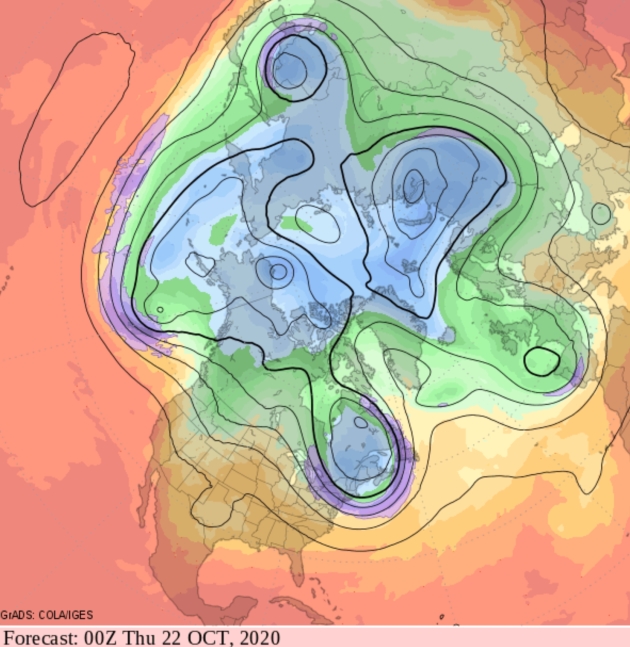 Flip-Flopping Model Runs. Yesterday’s GFS solution looking out 2 weeks looked pretty chilly for northern tier states, but the latest prediction suggests more of a west-to-east zonal flow with temperatures fairly close to average across most of the USA.

Hurricane Delta. Wednesday afternoon, when the visible image above was taken, showed “Delta” slowly strengthening and growing larger is size as it passed into the open waters of the Gulf of Mexico. Image credit: NOAA and AerisWeather. 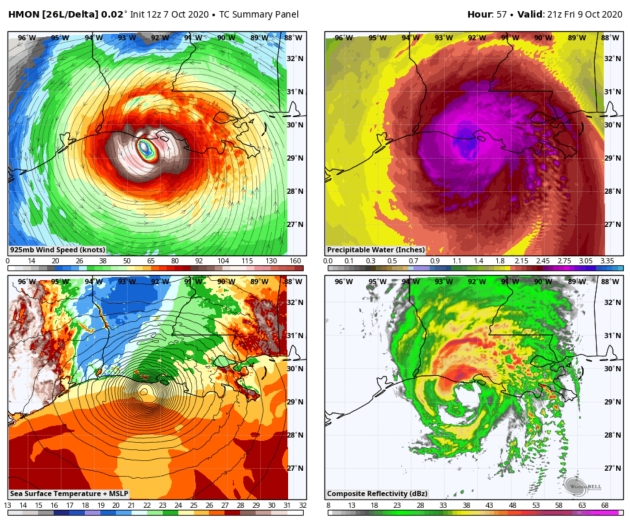 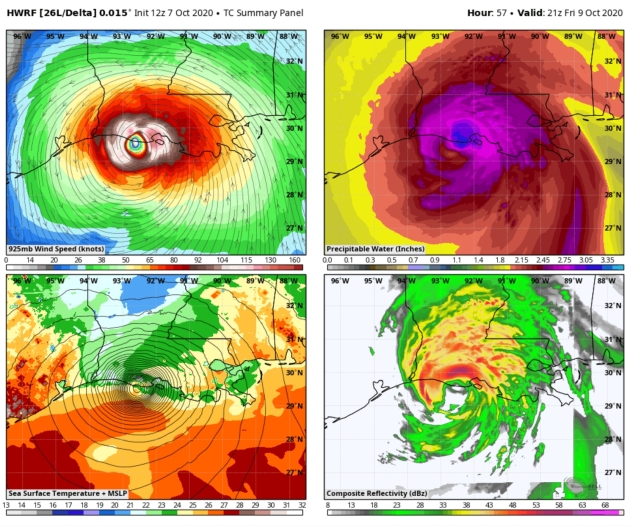 A Category 2 Hurricane. Hurricane Delta is currently impacting the Yucatan peninsula as a Category 2 with maximum sustained winds of 105 mph. The area has reported widespread heavy rainfall, powerful wind, and flooding. A wind gust of 75 mph was measured at Puerto Morelos this morning where landfall occurred. A gust of 64 mph was reported in Cozumel, Mexico. It is currently moving NW and 17 mph.

Major Hurricane Landfall Threat for U.S. Gulf Coast. Hurricane Delta will continue to impact the Yucatan today, but will return to the open Gulf waters tonight. A slower NW to NNW motion is expected Thursday with a turn northward by Thursday night/Friday. Conditions are favorable for intensification as it tracks through the Gulf. The majority of hurricane models show Delta restrengthening to a Category 4 hurricane in 36 to 48 hours. However, conditions are less favorable as it nears the Gulf Coast, which will contribute to some weakening. Regardless, Delta remains a formidable hurricane and is still forecast to make landfall as a MAJOR Category 3 Friday afternoon along the Louisiana coast. 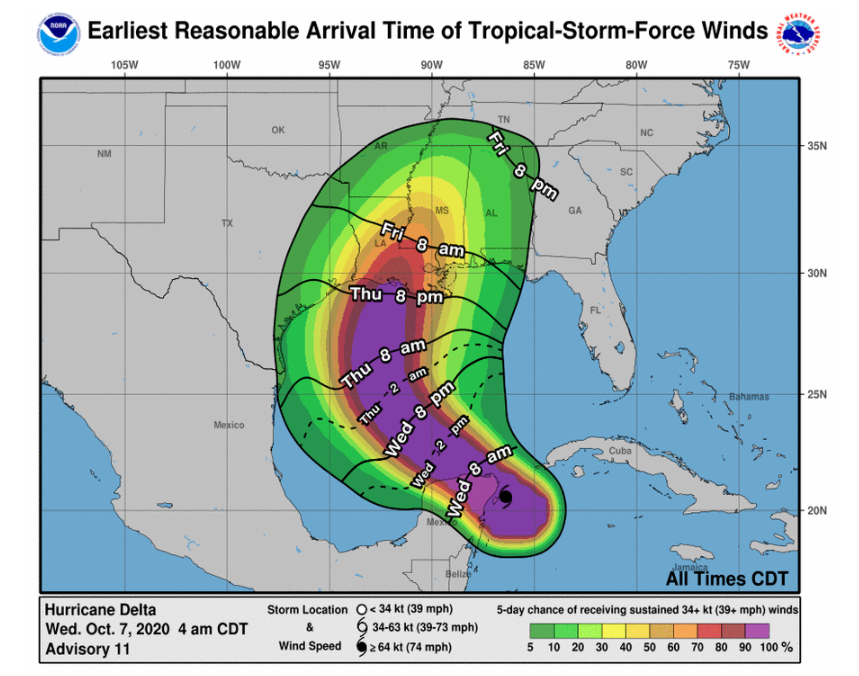 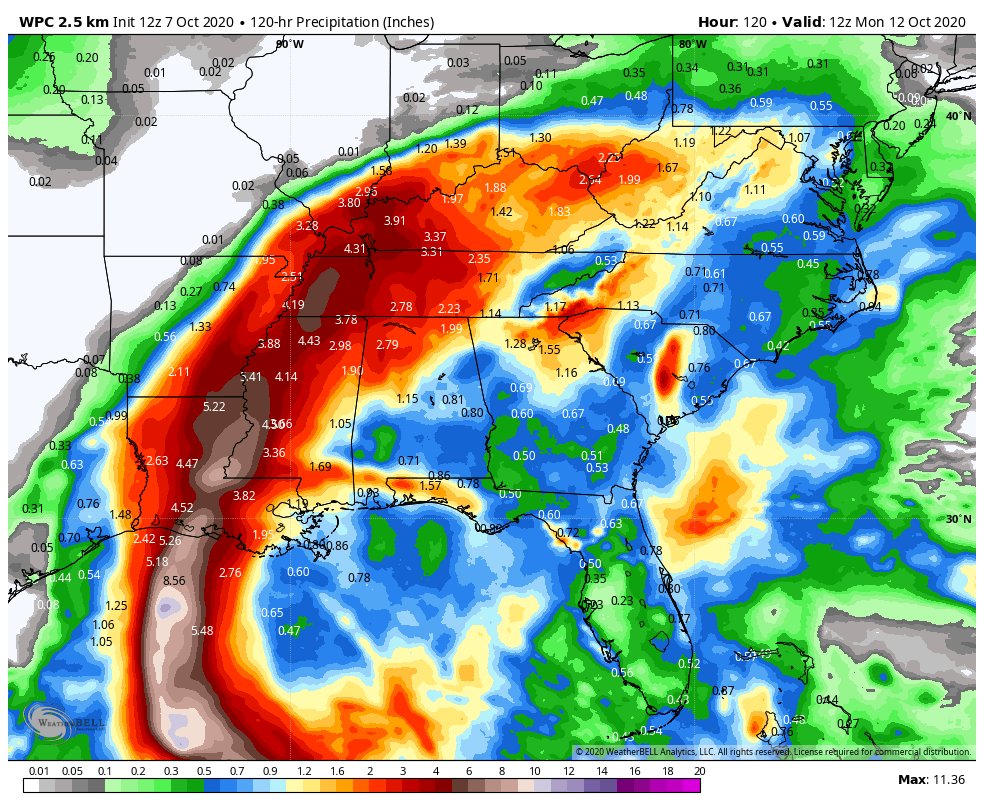 Widespread Rain & Flooding Threat. Torrential tropical rain will drench the Lower Mississippi Valley, the Tennessee Valley, and even the Ohio River Valley. The heaviest precipitation will likely impact Louisiana and Mississippi. Widespread 4 to 8 inches of rain will be possible with isolated maximum totals up to 12 inches across parts of the central Gulf Coast/Lower Mississippi Valley. The risk of flash flooding, urban, small stream, and river flooding is high. Map credit: WeatherBell. 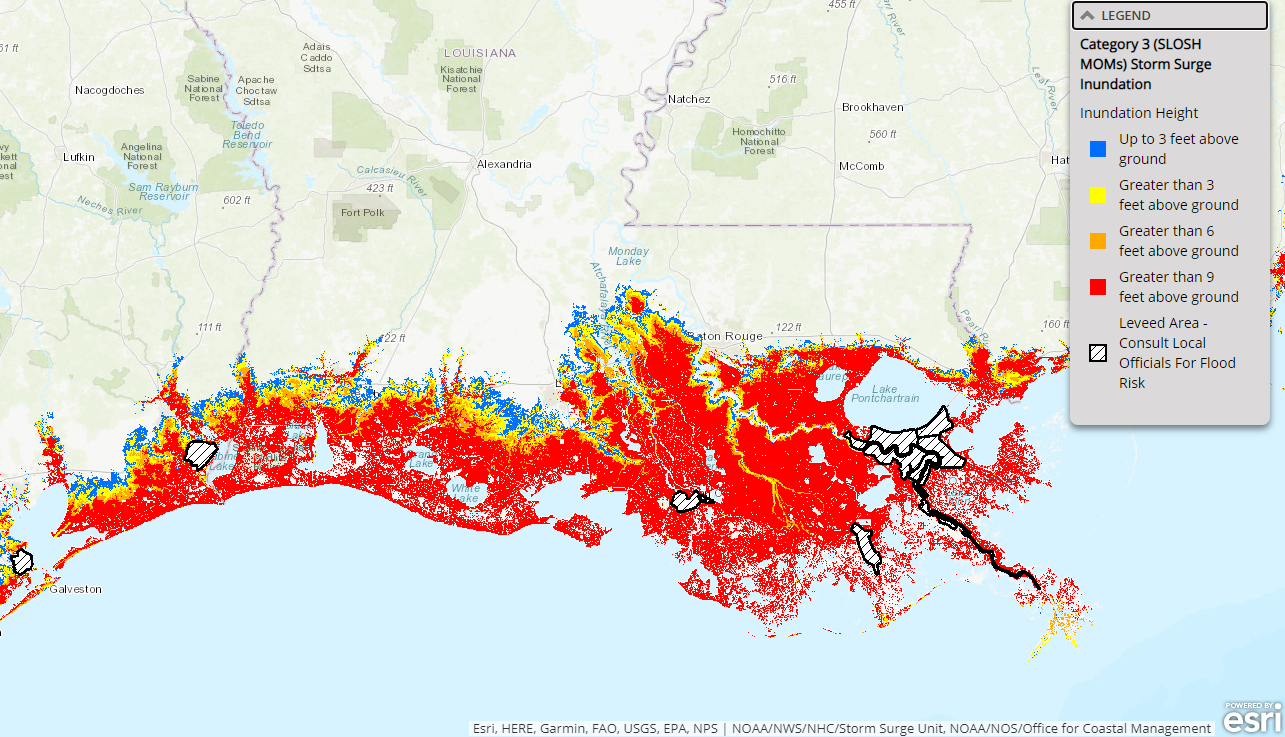 Life-threatening Storm Surge. While the NHC has not yet published an official storm surge forecast for the Gulf Coast, experts agree that Hurricane Delta will likely produce a life threatening, dangerous storm surge for coastal communities. Louisiana, and New Orleans especially, is particularly vulnerable. When combined with high astronomical tides, the storm surge will likely impact coastal communities later this week. The graphic above is a depiction of storm surge vulnerability under a Category 3 hurricane. Both the intensity and the size of the hurricane will ultimately dictate the storm surge potential.

The U.S. Could See the Fewest Recorded Deaths from Lightning Strikes This Year. One silver lining in during a volatile year of weather extremes. CNN.com reports: “In a year of increasingly bleak headlines, here’s one uplifting piece of news: The US is on track to experience the fewest recorded deaths from lightning strikes in a single year. Fourteen people have died from lightning strikes in the US so far this year. And because peak lightning season in the Northern Hemisphere takes place during June, July and August, the worst is likely behind us. Even if a few more deaths are reported in the next three months, the overall toll will still be below what we usually see, says John Jensenius, a meteorologist and lightning safety specialist with the National Lightning Safety Council…”

Can Songbirds Predict Hurricane “ACE” (Accumulated Cyclone Energy)? I know it sounds too strange to be true, but maybe birds know something we don’t. Here’s an excerpt of the study abstract at Nature.com’s Scientific Reports: “… I show that a single-brooded Nearctic-breeding species’ (Catharus fuscescens) nesting phenology and clutch size are significant predictors of Accumulated Cyclone Energy. The most skilled predictive model includes both mean clutch initiation date and mean clutch size (R2 = 0.84). Spearman rank correlation coefficients for both predictors with subsequent major hurricanes (1998–2016) are −0.55 and 0.52, respectively. Therefore, May and June clutch initiation and clutch size showed stronger correlations with subsequent hurricanes than early season (prior to August) meteorological predictions widely publicized by CSU, NOAA, and TSR (≤0.45, 2003–2014). Rainfall anomalies in the southern Amazon basin associated with ENSO cycles are a possible proximate cue affecting phenology and clutch size. This discovery potentially has far-reaching ornithological, meteorological, and social implications and shows that tropical storms significantly constrain breeding season behavior providing renewed evidence that hurricane activity is a primary factor regulating Nearctic-Neotropical migratory songbird populations…”
California’s Largest Wildfire on Record is Now a “Gigafire”. New words entering our lexicon, courtesy of Vox: “A single wildfire in California has reached the stunning size of more than 1 million acres, becoming the first “gigafire” in the state in decades. As of Monday morning, the August Complex Fire in the northern part of the state had burned at least 1,002,000 acres and was 54 percent contained, according to the California Department of Forestry and Fire Protection (Cal Fire). The area that has burned since the fire ignited on August 16 is larger than Rhode Island and spans seven counties. The blaze is just one of almost two dozen major wildfires in the Golden State right now in what has already been an extraordinary year for these sweeping infernos…” 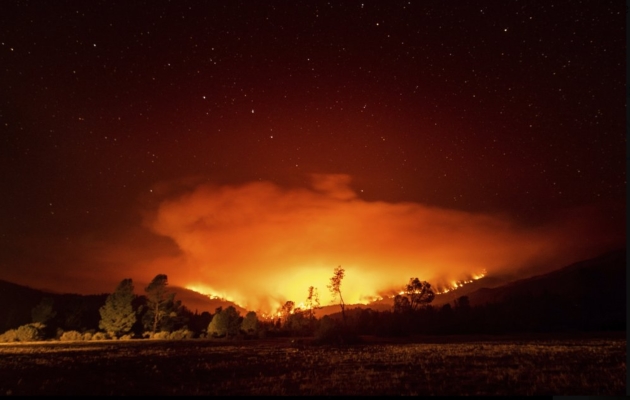