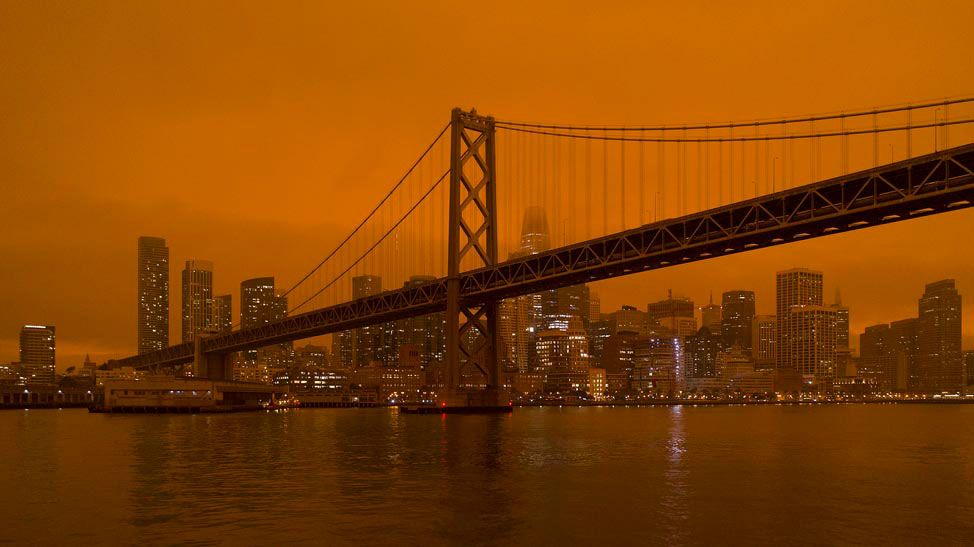 “Cold! If the thermometer had been an inch longer we’d have frozen to death” wrote Mark Twain. I’m not suprised or offended temperatures are tumbling. Considering the sun is as high in the sky today as it was back on February 24 we shouldn’t be the least bit surprised Canadian air is rushing south of the border.

It’s not an exaggeration to say the next week or so will look and feel more like early November. Wind chill is back, and a light mix of rain and snow can’t be ruled out early Saturday, even in the MSP metro. Beware of shiny objects, like snowfall accumulation predictions 3-7 days into the future. That’s more of a horoscope than a weather forecast.

ECMWF (the European model) is hinting at a major, prolonged rain event next week. Confidence levels are low, but with any luck we’ll see more significant rain to recharge depleted soil moisture before a widespread freeze sets in.

As I’ve been telling my dear wife for 36 years, it may be time to lower your expectations. A warm front now? 50s, maybe 60.

GFS outlook above: NOAA and WeatherBell.

Isolated Shower Today. There may still be enough instability to fire off a few afternoon showers, to go along with 40s and an annoying breeze.

Slush Potential. By Friday night there may be a little wet snow mixing in with any sprinkles and showers. Ground temperatures are warm enough that snow will (initially) melt on contact. The best chance of a little slush may come Friday night, especially north of MSP. 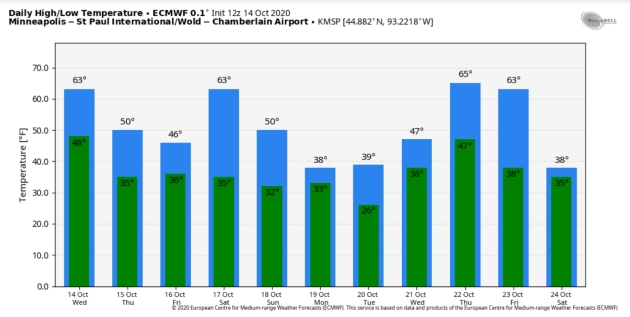 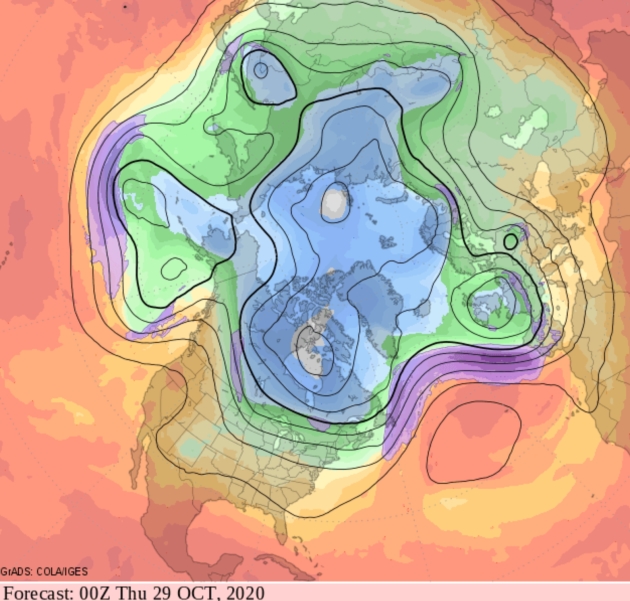 Low Confidence Peek Over the Horizon. Even lower-confidence than usual, since yesterday’s GFS run hinted at Pacific warmth the last few days of October. Based on the latest run (above) colder than average temperatures are predicted for northern tier states. Let’s see what tomorrow brings.

Does Snow in October Mean We’re In For a Rough Winter? The short answer is no. And The Minnesota DNR has the data to back that up: “…So, do early snows tell us anything about the coming winter? In short, no. It appears that an October snow is just an October snow, and has no bearing on the remainder of winter. From 1884 through 2019, 45 out of 136 Octobers in the Twin Cities have seen at least one day with measurable snow. The winters that followed those instances of snowfall have spanned nearly the entire spectrum of possibilities: dry, wet, snowy, cold, warm, and of course, average. In northern Minnesota, where October snows occur most years, the range of winter conditions after those snows is even wider. Even a persistently snowy autumn cannot promise us a brutal remainder of winter…”

85% Chance La Nina Lingers Through Winter. NOAA’s Climate.gov has an update; here’s an excerpt: “…The altered atmospheric circulation of ENSO affects global weather (here’s how that works in general and La Niña in specific). Since ENSO can be predicted months ahead of time, a lot of research has gone into understanding the patterns of ENSO’s global weather impacts. The idea is that if we can predict ENSO, we can get an early picture of what global weather could look like months into the future. A recent study by some of our colleagues at the International Research Institute for Climate and Society (IRI), led by Nathan Lenssen, carefully re-assessed global precipitation (rain, snow, etc.) patterns during ENSO events. They looked at La Niña and El Niño impacts separately, because the impacts are not always opposite. Meaning, although El Niño may be related to a wet winter in one location, La Niña doesn’t necessarily mean a dry winter in that location…”

Hurricane Delta By the Numbers: Peak Winds, Rain and Surge in Record-Setting Season. Capital Weather Gang has the details on the second hurricane to strike Louisiana in a 43-day period: “Just when the record-setting 2020 Atlantic hurricane season seemed like it couldn’t get any worse, Hurricane Delta exploded in the northwest Caribbean one week ago, plotting a devastating course from the Yucatán Peninsula to the northern Gulf Coast. It crashed into Cancún and Cozumel on Wednesday before regrouping over the Gulf of Mexico and slamming into storm-weary Louisiana on Friday night. This was the second hurricane strike in six weeks in southwest Louisiana. Residents from Lake Charles to Lafayette now find themselves cleaning up from yet another vicious storm, a process that will take months or longer to complete…”

What It’s Like to Watch Hurricanes Batter Your Hometown – Over and Over. Perspective on the unimaginable from The New York Times (paywall); here’s an excerpt: “…Repairs are set to begin soon, but there’s an eerie sense of limbo, with still another month left in what has become a record-breaking hurricane season. While the tree has been removed, and her home partly covered in blue tarp, she doesn’t yet know whether the damages caused by Hurricane Delta will delay those repairs. For now, she’s settled with my parents and me in Conroe, Texas — about 40 miles outside Houston. That sense of dislocation, and the weight of hurricanes — on my family and many others in the South — has only become more potent over the years. Natural disasters mark noticeable chapters in our lives...” 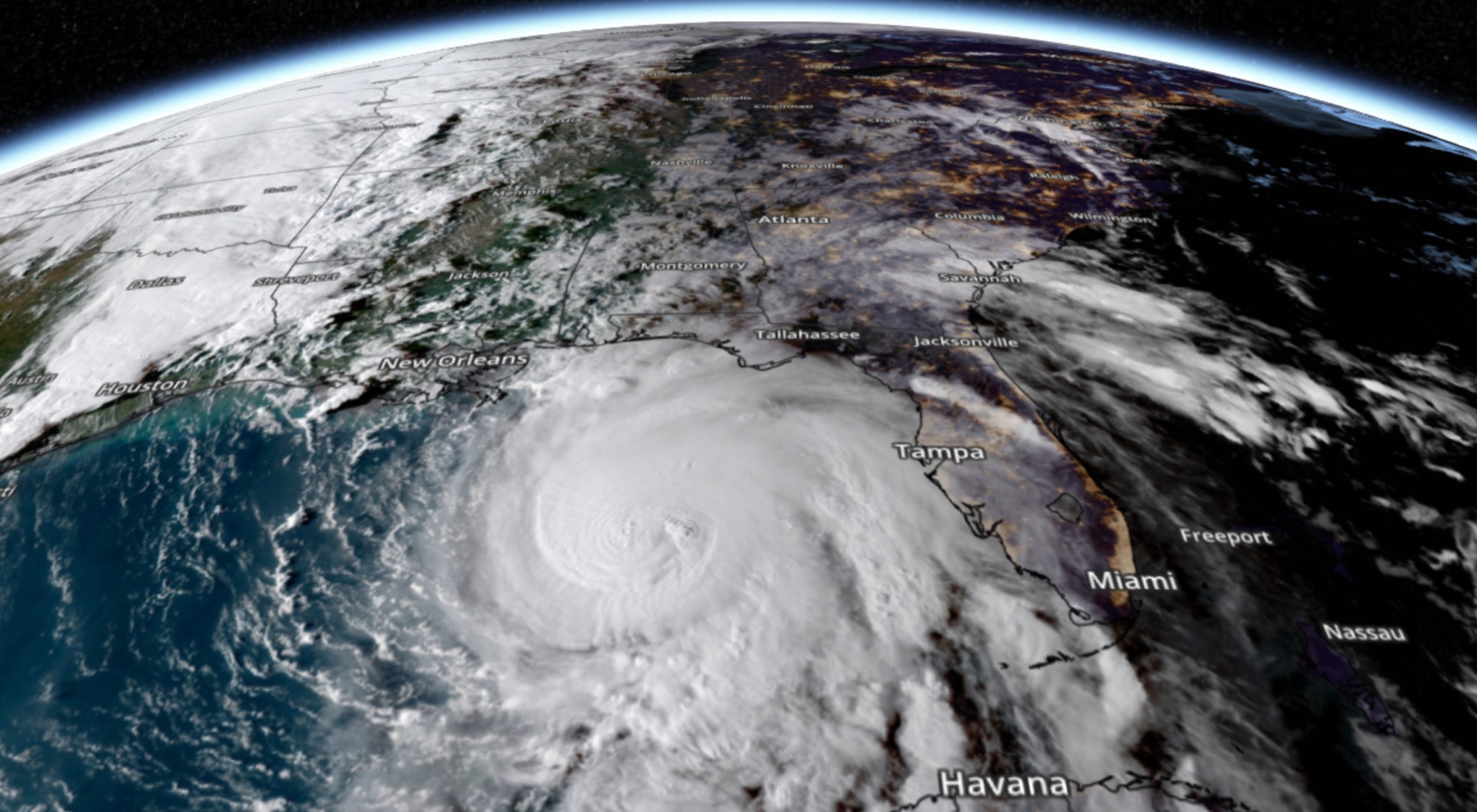 Tropical Storms Can Sometimes “Supercharge” the Hurricanes That Follow. Here’s an excerpt from a new study highlighted at National Geographic: “…But new science shows that Gordon’s effects, in conjunction with a heat wave over the region in its wake, helped Michael intensify into the strongest storm ever to make landfall in the Florida Panhandle. The scenario “supercharged the ocean battery” that powered the very intense hurricane, says Dzwonkowski. Tropical cyclones feed on hot ocean waters. Warm water acts as storehouse of energy that storms can draw on, like a battery: the hotter the water, or the more of it there is, the more energy can be transferred into the air above. Cold water, in contrast, can drain energy from a storm…”

What Exactly Is a Gigafire? Here’s an excerpt from Mental Floss: “…The term gigafire is thought to have originated in the comments section of the Wildfire Today website. In 2017, a visitor to the site with the screenname “kevin9” proposed that fires consuming over 1 million acres should be dubbed gigafires. The site began using the term for wildfires that met or exceeded that threshold in Australia. The record-setting wildfire destruction this year is thought to be exacerbated by climate change, with hotter and drier conditions providing an ideal setting for fires to take hold and spread. As of Monday, firefighters had contained roughly 65 percent of the California blaze...”

Wildfire Smoke Travels Far But Never Really Disappears. Popular Science has an interesting post with data I wasn’t aware of – here’s an excerpt: “…Just as local weather impacts smoke movement, so too can smoke change local weather patterns, says Clements. When smoke shades the incoming rays of light, the temperature differential between the shaded and unshaded portions of air can create a “density current” in which air flows from areas of high to low pressure, often in the opposite direction of the prevailing wind. These currents can carry smoke particles far from the origin of the fire. This “smoke shading” can also suppress ambient wind. A warm and sunny day spurs convection currents, Clements explains. “Eddies and thermals form, which makes the atmosphere more turbulent at the surface,” he says...”