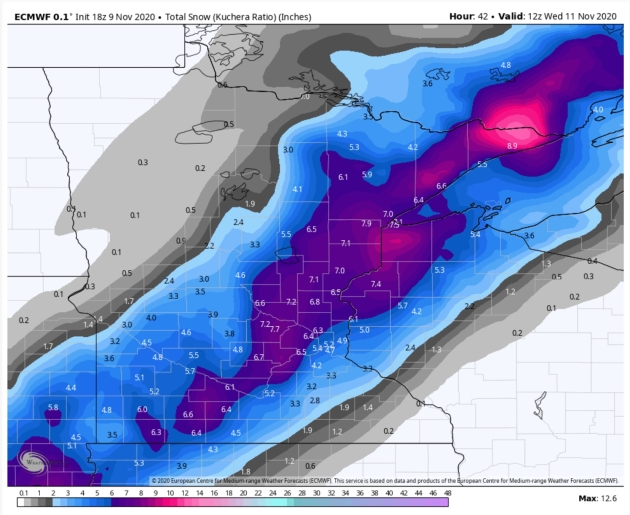 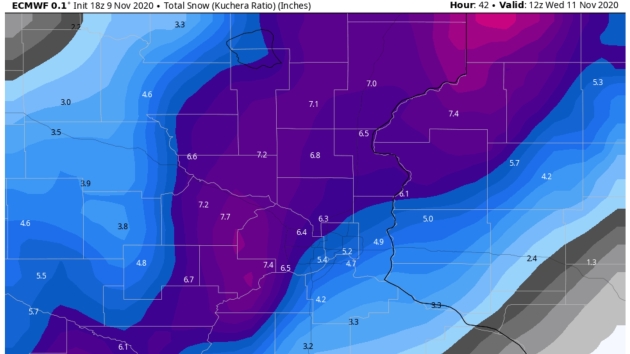 Plowable. Hard to believe it was in the 70s two days ago. The weather always changes fast at this latitude but…good grief. ECMWF (above two graphics) shows 5-7″ for the metro – there may be a little melting as the snow begins to fall later today, but some spots will wind up with 4-6″. Maps: WeatherBell. 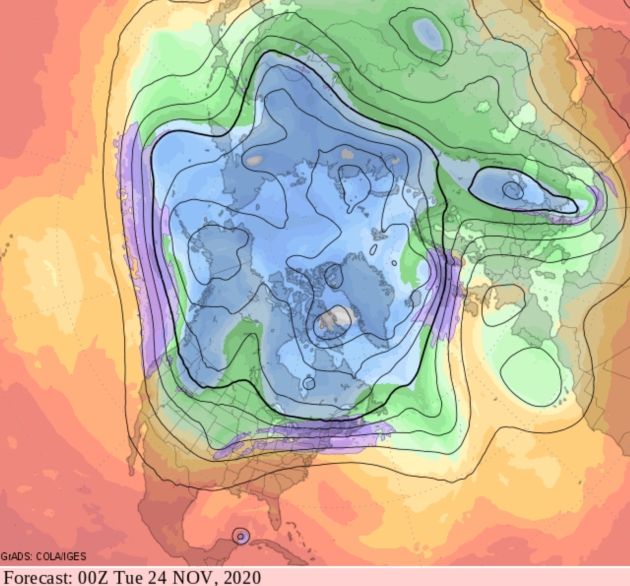 Moderate Pacific Flow Leading Up to Thanksgiving. I see continued troughing in the western USA, suggesting more of a Pacific breeze for Minnesota the week leading up to Thanksgiving, with temperatures are few degrees above average. In spite of today’s snow, I see no extended spells of abnormally cold weather through late November.

A Very Warm Start to November. Dr. Mark Seeley breaks it down in Minnesota WeatherTalk; here’s an excerpt: “After recording mostly cooler than normal temperatures on the first day of the month, temperatures have averaged 12 to 18 degrees F warmer than normal under mostly bright, sunny skies. The expected persistence of these warm temperatures through Sunday, November 8th may produce one of the warmest November weeks in state history, rivaling 1975 and 2016. Many climate stations reported setting new record warm daily maximum temperatures and record warm daily minimum temperatures. On November 3rd over 20 new daily record high temperatures were reported within the long-term state climate network. On the 4th this number rose to over 40 stations, and on November 5 it was over 30 stations…”

Eta In The Southeastern Gulf Of Mexico. Around 11 PM last night, Eta made landfall on Lower Matecumbe Key, Florida, and the system continued to move westward through the overnight hours. Gusty winds and heavy rain are still occurring across southern Florida, with over 8” reported in Fort Lauderdale over the past 72 hours. As of 7 AM ET, Eta was located over the southeastern Gulf of Mexico, about 55 miles west-northwest of Dry Tortugas, FL, or 80 miles west-northwest of Key West, FL, and moving west at 13 mph. Eta was a strong tropical storm with winds of 65 mph.

Eta Track. Eta will continue to move westward through the morning, followed by a move west-southwest later today and tonight with a decrease in forward speed. Little movement is then expected tomorrow before it starts to slowly move north Wednesday. As we head late in the week, we should see a northeast movement, and Eta could approach the Big Bend of Florida late this week into the weekend. Some slight strengthening is expected in the next couple of days, and there’s the chance that Eta could reach hurricane strength in the Gulf of Mexico. However, upper level winds should increase mid/late week, which, along with dry air, will allow weakening to occur.

Key West Wind Gusts. Strong winds are expected to continue through the morning hours in Key West, but as Eta continues to move away today those wind gusts should decrease later in the day. 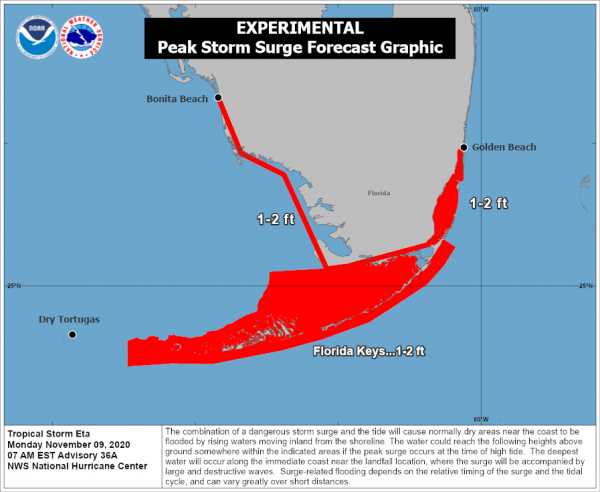 Storm Surge Concerns. While Storm Surge Watches and Warnings have been cancelled, there is still the potential for a 1-2 foot storm surge from Bonita Beach, FL to Golden Beach, FL including the Florida Keys today. 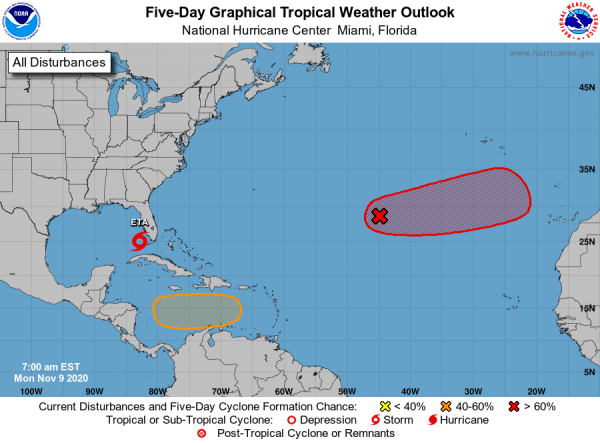 Other Concerns. Yes, tropical season just continues to roll on in the Atlantic, with the official end of the season not until November 30th. Besides Eta, there are two other areas of concern:

Tropical Depression Vamco. We’re also keeping an eye on Vamco which looks to impact portions of the Philippines, including Manila, later this week. Vamco is expected to strengthen into a typhoon with winds of 125 mph by Wednesday evening when the storm will be sitting east of the Philippines. It is expected to weaken as it moves across the country Wednesday Night and Thursday, but it still could have winds of 75 mph by Thursday evening as it sits just west of the Philippines. This storm looks to bring another round of damage in areas recently hit by tropical systems, including Goni. Heavy rain of at least 6-12” could lead to flash flooding, including in Manila.

What is a “Super-Typhoon” and Why Are They So Dangerous? WIRED.com (paywall) has a good explainer; here’s an excerpt: “…Meteorologically, typhoons and hurricanes are the same phenomenon; it’s just traditional to call them typhoons in the western Pacific or hurricanes in the eastern Pacific or Atlantic. They start as storms that pass over hot surface water, at least 80 degrees Fahrenheit, down to 150 feet deep. These storms suck up water from the ocean’s surface, which evaporates into the air. As they rise, the water vapor condenses to form droplets, releasing more energy, while low pressure beneath the rising air masses brings in a rush of more air. A tropical storm officially turns into a hurricane when these counter­clockwise winds reach 74 miles per hour. Meteorologists applied the “super” designation to Typhoon Goni after it reached wind speeds of 150 miles per hour...”