December Temperature Anomalies. 4-8F warmer than average this month? That’s what NOAA’s Climate Forecast System version 2 is (consistently) predicting for December across Minnesota, with eye-opening anomalies over 10F for much of Canada. To which I reply, what La Nina? Map credit: NOAA.

Top 7 Warmest Minnesota November on Record? That’s the latest, based on data compiled by Dr. Mark Seeley; here’s an excerpt from Minnesota WeatherTalk: “In contrast to October, this November was very much warmer than normal. Most climate stations report an average monthly temperature that ranges from 4 to 6°F above normal. This means that November of 2020 will likely rank among the top 7 warmest in Minnesota history back to 1895. The week of November 3-9 was the warmest week in November history here. Within the state climate observation network over 200 daily record maximum temperatures were recorded, along with over 120 record warm daily minimum temperatures. For the first time in history Minnesota recorded 4 days during November when the daily maximum temperature reached 80°F or greater…” 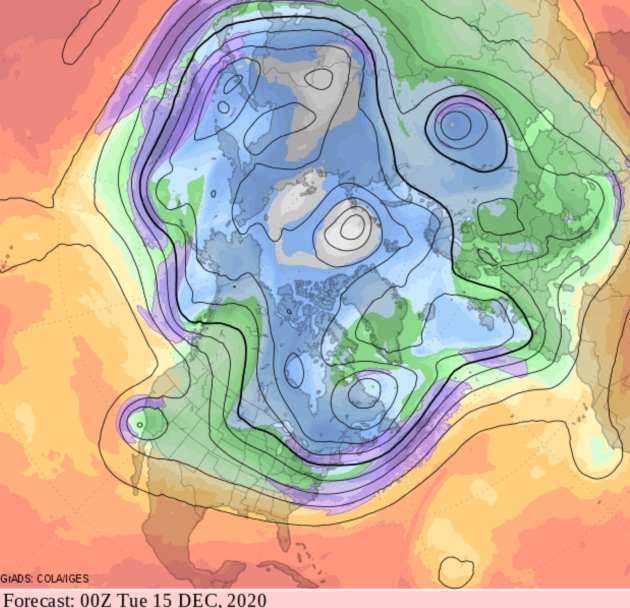 Mid-December: Still Modifed Zonal. We’ll see cold frontal passages (take it to the bank) but the overall flow is more Pacific than Arctic, so brief cold spells will be followed by (longer) milder periods with 40s returning. 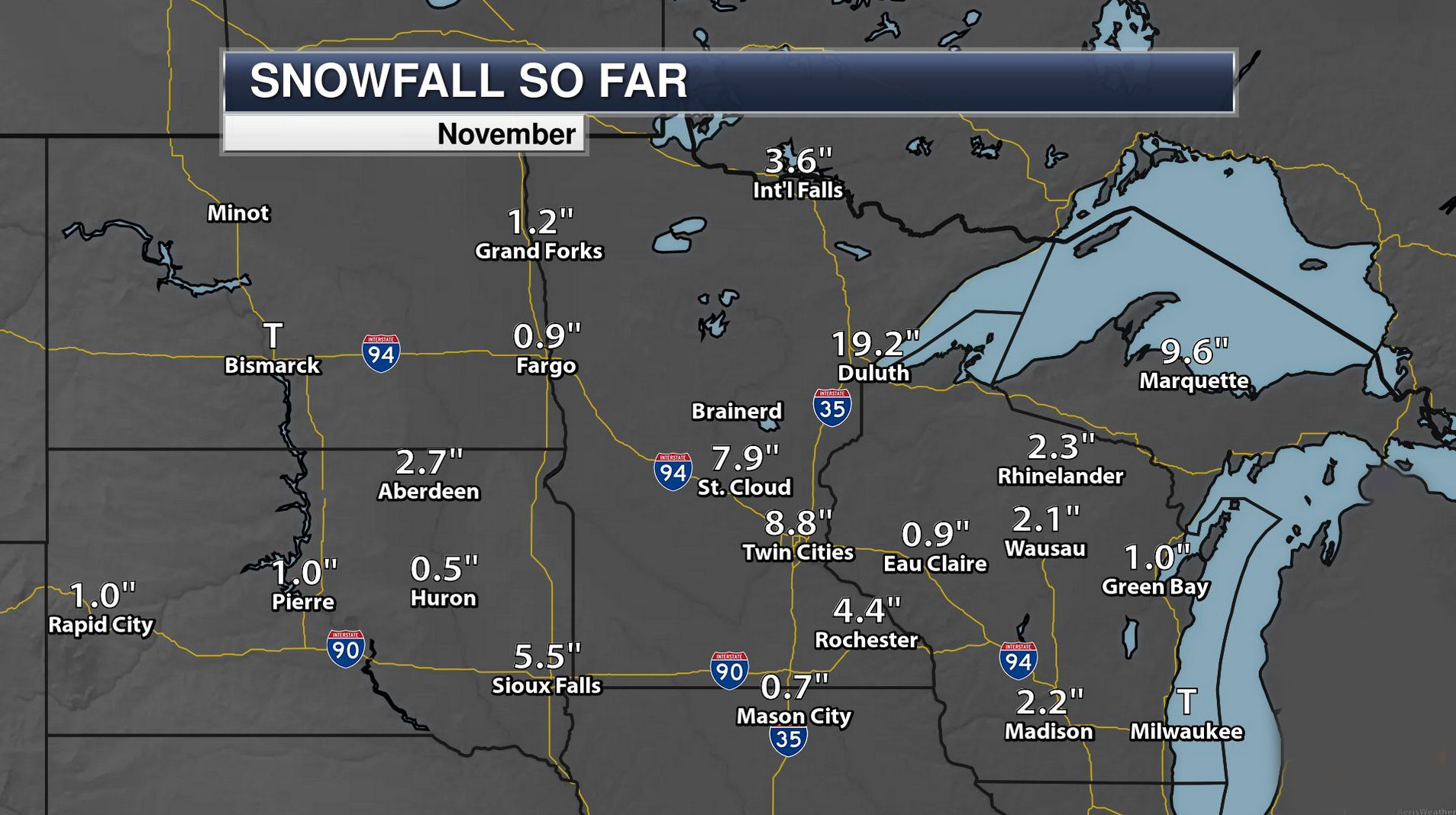 A Perfectly Average November Snowfall for MSP. 8.8″ of snow earlier this month (remember) and then nothing the latter half of the month still adds up to normal 30-year November snowfall for the Twin Cities. A whopping 19.2″ was 6.1″ snowier than normal for Duluth. Map credit: Praedictix and AerisWeather. 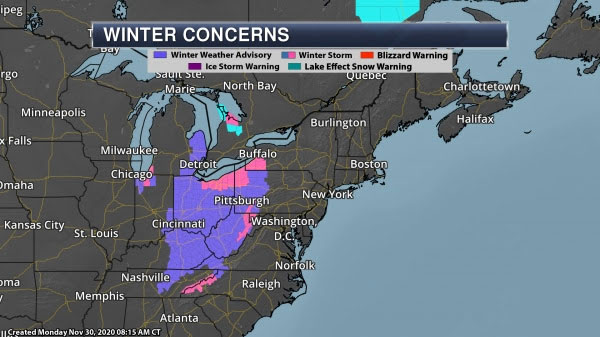 Heavy Snow On The Way. As low pressure develops and moves across the eastern United States today into Tuesday, heavy rain will be possible from the Deep South to the Northeast coast, with heavy accumulating snow possible from the Appalachians to the Ohio Valley and Northeast. For areas like Cleveland, rain is occurring today and expected to change to snow tonight, lasting into Tuesday with the heaviest snow expected tomorrow.

Winter Storm Concerns. Numerous Winter Storm Warnings and Winter Weather Advisories stretch from the Appalachians to the eastern Great Lakes, ahead of the potential of heavy snow across the region. This includes the following locations: 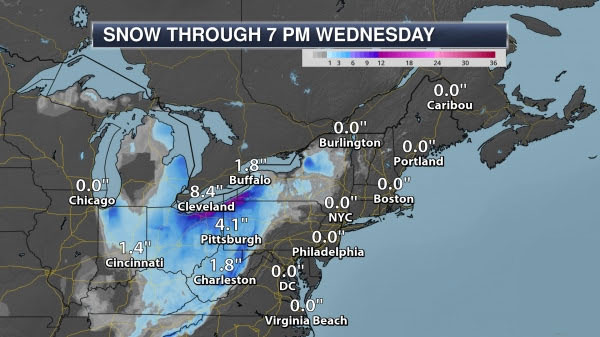 Expected Snow. The heaviest snow is expected south of Lake Erie over the next few days, particularly in the higher terrain east of Cleveland into northwestern Pennsylvania, where snow totals of 12-18″ will be possible. This will make travel very difficult across the region. In Cleveland, up to an inch or two of snow will be possible tonight, with 4-10” possible Tuesday, and another 1-3” possible Tuesday Night. 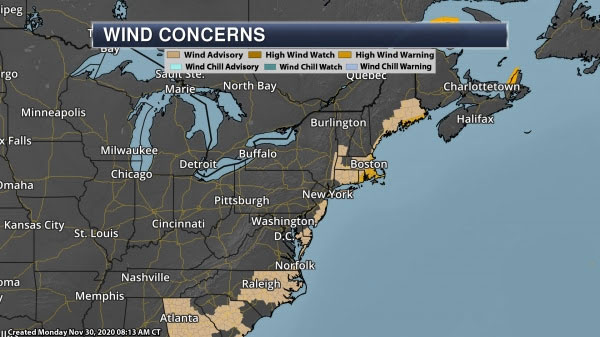 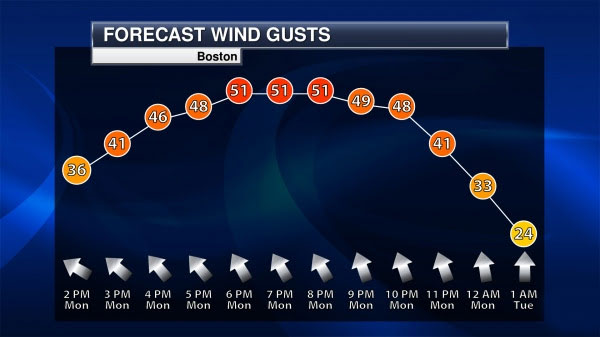 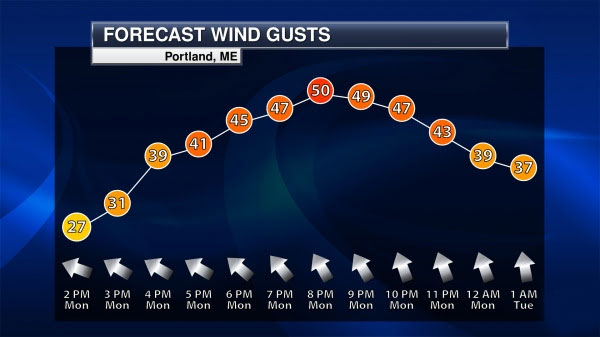 Strong Winds In The Eastern U.S. This system will also produce strong winds across portions of the eastern United States. Portions of Rhode Island, eastern Massachusetts, and Maine are under High Wind Warnings today into Tuesday due to wind gusts up to 60 mph. Boston is under a Wind Advisory from 3 PM today to 1 AM Tuesday for wind gusts up to 50 mph. In Portland, a Wind Advisory is in place from 4 PM this afternoon to 1 AM Tuesday, also for wind gusts to 50 mph.

Record-Shattering 2020 Hurricane Season Officially Comes to an End. USA TODAY has a good recap of an extraordinary year: “It’s officially over. After six long months and 30 storms from Arthur to Iota, the record-shattering 2020 Atlantic hurricane season ends Monday.  “I didn’t think I would live to see that, but it’s happened,” Penn State University meteorologist Michael Mann told USA TODAY, referring to the record number of named storms in a single season. A typical season sees only 12 storms. All preseason forecasts said an active season was likely, but none came close to the actual number. “Our group here at Penn State predicted an unusually active season, as many as 24 named storms – the most of any of the preseason predictions,” Mann said. “But even THIS wasn’t aggressive enough a forecast...” 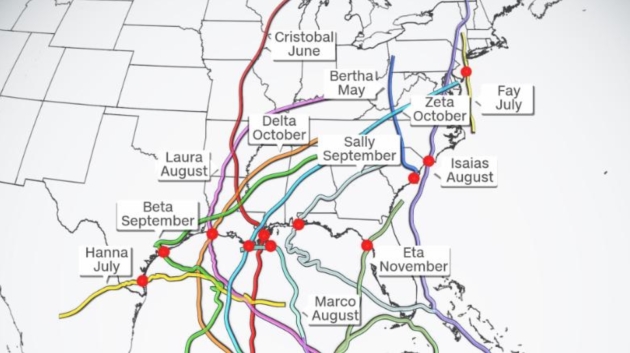 A Very Rough Hurricane Year for Coastal U.S. Residents. CNN.com has a good recap. It’s over now, right? Here’s the intro: “People along nearly every mile of coastline from Texas to Maine have been put on alert this Atlantic hurricane season, as 12 of 29 storms made landfall in the United States in this record-setting year. “Every mile of the US Gulf and Atlantic coast has been under a Tropical Storm or Hurricane Watch or Warning, except for one single county with coastline: Wakulla County, Florida,” said Jake Carstens, meteorology graduate research assistant at Florida State University…”So far this year, 3598 of 3613 miles (99.6%) have been warned,” tweeted James Franklin, the former chief of the Hurricane Specialist Unit at the National Hurricane Center...”