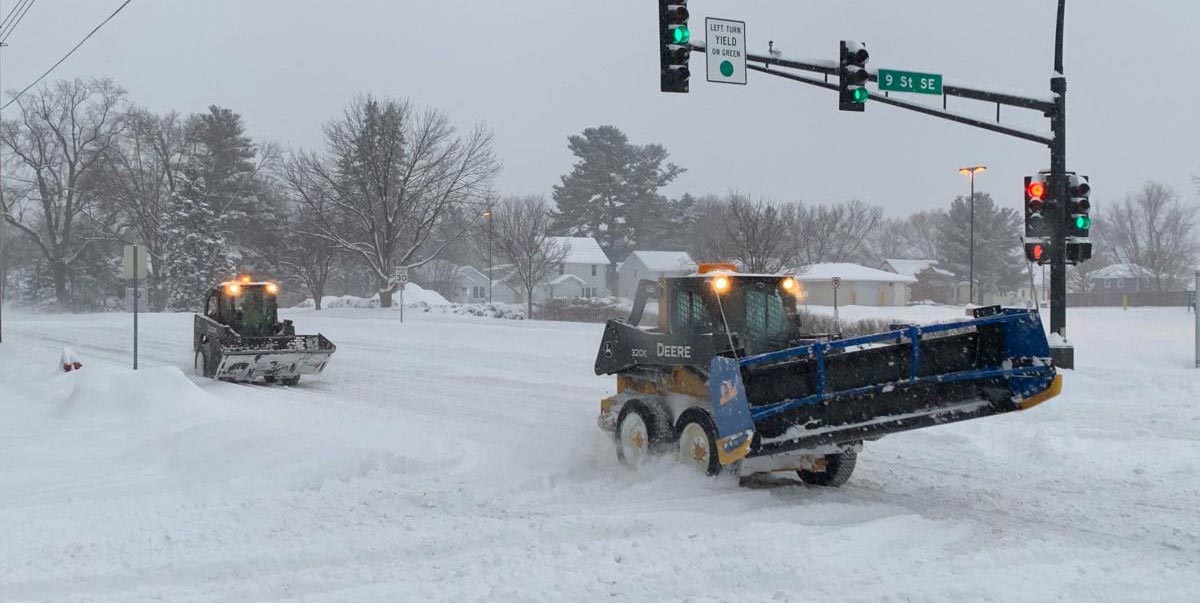 It’s coming right down to the wire, but I suspect a (very) white Christmas is imminent. Weather models are trending snowier over time and plowable amounts are likely by Christmas Eve. “How many inches in my yard, Paul?” I’m thinking 5-10”. A real storm. ECMWF (European) is hinting at a foot or more. I wouldn’t rule out final amounts in that range, amounts that will leave skiers and snowmobilers giddy. And commuters fuming.

I’m worried about wind (gusting to 40-50 mph later today) with severe blowing and drifting. Blizzard conditions are possible, especially north/west of MSP. Travel conditions will worsen as the day goes on.

Single digit highs Christmas Eve give way to 20s next week as we slide into a snowier pattern. It would be premature to write off winter.

Model Predictions. For 4 consecutive runs (every 6 hours on Tuesday) ECMWF was predicting a foot or more of snow for the Twin Cities. Not sure we’ll get that much, but the consistency from run to run, the continuity, was a signal that this was (is) a storm to watch.

Blizzard Potential. Although there’s no snow on the ground (yet) the snow that does fall will become powdery by afternoon as temperatures fall like a rock through the 20s – prone to blowing, drifting and ground blizzards with visibilities near zero at times. Never tell a Minnesotan not to drive, but I sure won’t be out on the roads after midday today. Nope.

Sliding Into a Snowier Pattern. Although climate models suggest an overall mild signal into March, there will be wintry relapses, and the maps look stormier for early January with a series of Pacific troughs pushing inland, each one capable of additional snow.

Mild Conditions May Prevail Across Much of U.S. for First Three Months of 2021. The Weather Channel explains the processes in play: “Temperatures across much of the United States will be milder than average for the remainder of winter and into the start of spring, according to the latest outlook issued by The Weather Company, an IBM Business. Above-average temperatures are expected across most of the Lower 48 from January through March. Temperatures will likely be the most above average from eastern Utah southeastward into northwestern Texas. Areas near the West Coast and the northern tier from Washington into northern Minnesota may experience temperatures near average or slightly warmer…”

AI Model Shows Promise to Generate Faster, More Accurate Weather Forecasts. Thoughts and prayers – I hope AI helps to get us to the next level of accuracy and confidence. Here’s an excerpt from Science Daily: “A collaboration between the University of Washington and Microsoft Research shows how artificial intelligence can analyze past weather patterns to predict future events, much more efficiently and potentially someday more accurately than today’s technology. The newly developed global weather model bases its predictions on the past 40 years of weather data, rather than on detailed physics calculations. The simple, data-based A.I. model can simulate a year’s weather around the globe much more quickly and almost as well as traditional weather models, by taking similar repeated steps from one forecast to the next, according to a paper published this summer in the Journal of Advances in Modeling Earth Systems...”

Weather Service Faces Backlash After Launching “Slow”, “Unusable” Radar Site. The “New Coke” of radar sites? I’ve tried it, and I liked the previous national radar mosaic much better. Chron.com has details: “Last week, the National Weather Service launched its first new website for radar imagery since the early 2000s, touting it as a “major upgrade.” The public did not see it that way. “Horrible,” “really low quality work,” “very very buggy,” “unusable,” “absolutely terrible,” “not ready for public release,” “garbage” and “the worst” represent a sample of complaints from users on social media since the radar.weather.gov site went live…”

Click here to see what all the (weather) fuss is about.

Hawaii Residents Told to Stay Home as Kilauea Volcano Erupts. I didn’t have this on my 2020 Apocalypse Bingo Card either. Social distancing just got a little easier on the Big Island. CNN.com reports: “The Hawaii county Civil Defense Agency (COH) has asked residents to stay indoors after the Kilauea volcano erupted following a series of earthquakes. The eruption on the Big Island took place late Sunday night local time at the Halemaumau Crater, COH said. The Kilauea Volcano observatory raised the alert level to warning, an advisory said. A glow was detected within the crater of the volcanos summit and “an eruption has commenced within Kilauea’s summit caldera,” the advisory said. “Trade winds will push any embedded ash toward the Southwest. Fallout is likely in the Kau District in Wood Valley, Pahala, Naalehu and Ocean View. Stay indoors,” a tweet from COH said…”