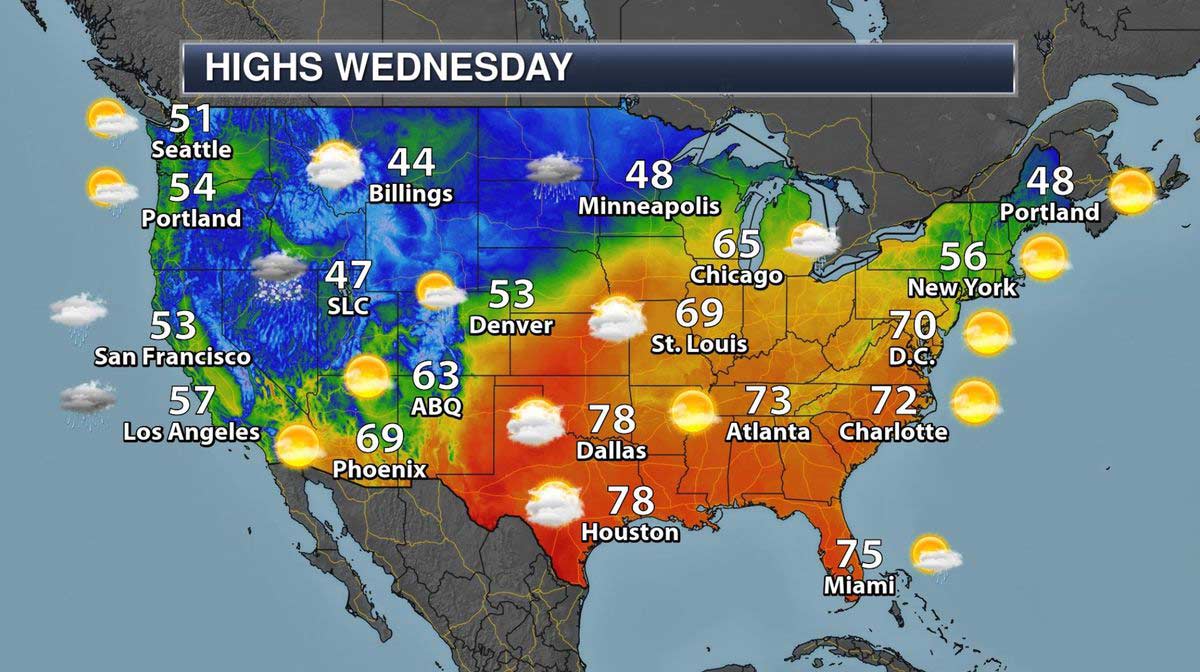 A Few Cold Slaps. March giveth, and March taketh away. Today’s 2-week forecast of 500mb (18,000 foot) winds valid the evening of March 23 looks colder than yesterday’s simulation. It would be wildly premature to pack away the heavy jackets (or pull out driveway stakes).

U.S. Sees Coldest February Since 1989 Amid Global Temperature Dip. Capital Weather Gang has details: “…The cold in the U.S., combined with unusually frigid air across much of Eurasia, resulted in global warmth less pronounced compared to recent Februaries, according to a separate report released by the Copernicus Climate Change Service, a program of the European Commission. Copernicus found that globally, February averaged about 0.46 degrees (0.26 Celsius) above the 1981-2010 average and still 2.2 degrees (1.2 Celsius) above preindustrial levels, when averaged over the last 12 months. The planet’s average temperature was cooler compared to other recent Februaries, but still well above average, in keeping with trends related to global warming from human-caused greenhouse gas emissions. The relatively cool start to 2021 is a likely indication that the year won’t set another record for the warmest year, as 2016 and 2020 did…”

The Great Blind Spot in Hurricane Preparedness. The New Republic (and Washington Post) delve into the implications of a consistently longer hurricane season: “Hurricane season is creeping its way deeper into spring. Last month, The Washington Post reported that the National Oceanic and Atmospheric Administration is considering officially moving up the start of the storm season from June 1 to May 15. The move, being reviewed by the NOAA’s National Hurricane Office in Miami, is the result of experts coming to the conclusion that, as global temperatures have consistently risen, so too have the frequency of pre-June storms. According to the Post, the past six years have featured tropical storms forming before the official season start date, with last year’s Tropical Storm Arthur announced by the NOAA on May 16. By season’s end in December, 2020 ranked as the most active hurricane season in 15 years with 30 storms topping the 28-storm mark set by 2005. How to measure hurricane season, however, isn’t as tricky as the other question global warming is already raising in coastal communities: how to prepare for it...”

NOAA Moves Step Closer to Starting Hurricane Season Earlier. Gizmodo has an update: “We’re one step closer to officially moving up hurricane season. The National Hurricane Center announced Tuesday that it would formally start issuing its hurricane season tropical weather outlooks on May 15 this year, bumping it up from the traditional start of hurricane season on June 1. The move comes after a recent spate of early season storms have raked the Atlantic. Atlantic hurricane season runs from June 1 to November 30. That’s when conditions are most conducive to storm formation owing to warm air and water temperatures. (The Pacific ocean has its own hurricane season, which covers the same timeframe, but since waters are colder fewer hurricanes tend to form there than in the Atlantic…”)

How Tornado Alley Has Changed. More big, destructive tornadoes are striking south and east of traditional Tornado Alley, according to data highlighted in a post at News Channel 6: “…One of the issues is there’s just a lot more people living in the southeast than there are in the plains,” said Allen Gerard, tornado researcher. “They tend to be more evenly distributed across the southeastern states and because of that you have more of a footprint for which tornadoes can cause damage to people’s homes and cause injuries and fatalities.” Tornado season is longer in the Dixie Alley than in the traditional Tornado Alley and tornadoes also have a tendency to strike there at night. “The plains tornado risk tends to be more confined to a very specific time year, the late spring months of April, May, and early June and more confined to a particular time of the day, late afternoon into the evening,” said Gerard. “Whereas in the southeast, the risk is much more across the entire year and much more across the entire day...”

High-Resolution Weather Predictions Will Power the Clean Energy Revolution. I wrote a post for Medium; here’s an excerpt: “…Weather SaaS companies (software as a service) are already powering wind farms, solar gardens, and utility-scale operations, predicting future wind potential and solar irradiance many hours, even days into the future. AerisWeather is a weather data company with a full suite of data APIs and high-resolution mapping graphics, providing the analytical and predictive fuel companies require to match demand with clean-tech energy sources. “Market trends suggest that wind, solar and energy storage — often in hybrid configurations — will become increasingly dominant parts of the electricity sector. This rapid evolution of electricity generation will make the need for accurate, hyper-local weather data that allows the optimization of those resources and their interplay more important and valuable than ever. This era gives new, literal, meaning to the conventional wisdom that knowledge is power” says Rolf Nordstrom, President and CEO of Great Plains Institute in Minneapolis…”

The Tide is High – And Getting Higher. A post at WIRED.com (paywall) explains: “…A new study shows that nuisance flooding is exacerbated by dredging and the construction of piers and jetties that were intended to make coastal living easier but are in fact redirecting the flow of incoming ocean water and making high tides higher than ever before. Published Friday in the journal Science Advances, the study compared high and low tide ranges measured during the past 70 years with an older database of historic tidal measurements made in the mid-1800s and recently found in stacks of old boxes stored in an annex of the National Archives in College Park, Maryland. The researchers found that out of 40 coastal tide gauges operated by the National Oceanic and Atmospheric Administration (NOAA), nearly half had measured more nuisance flooding days because of higher local tide ranges. Cities built along coastal estuaries showed the biggest tidal changes…”

As Climate Scientists Speak Out, Sexist Attacks Are on the Rise. It’s 2021 and THIS is still happening – here’s an excerpt from a post at Scientific American: “One scientist was called Climate Barbie. Another was described as an “ugly fake scientist.” A third had an erect penis drawn on her car window while she was in the field researching sea-level rise. Such is the life of many female climate scientists in 2018. All researchers face the risk of being criticized when speaking publicly about their findings. But women in the field describe being attacked based on their gender. They’ve endured insults, sexual taunts and degrading comments about their professional acumen. Most of their harassers use social media, email and the phone for their attacks. But there’s a fear that it could become physical…”

Climate Change Will Reshape Silicon Valley as We Know It. Another worthy post from WIRED.com; here’s a clip: “…Climate change is the defining crisis of our time, and as it becomes more imminent, our efforts to address it will become the epicenter of the next entrepreneurial revolution. The recent news that Elon Musk is dueling with Jeff Bezos for the title of world’s richest person is a harbinger of what will be the biggest VC opportunity of the 21st century. Electric vehicles are only the tip of the iceberg. A recent PwC report found that climate tech investment increased from $418 million per year in 2013 to $16.3 billion in 2019, growing at five times the venture capital market rate over the last seven years. Heating and cooling systems, agriculture, raw materials, and manufacturing are all overdue for reinvention as we strive for a greener future, creating the promise of even more innovation on the horizon...”

Love Snow? Here’s How It’s Changing. What are the trends? Less snow overall for much of the western USA, but an apparent uptick in amounts for some northern tier states. A story at Scientific American analyzes the trends: “…In many places, a warmer, wetter atmosphere might simply lead to an increase in rain. But the researchers note that the coldest parts of North America—namely, Canada and parts of the northern United States—might be expected to actually see an increase in the amount of snow that falls to the ground. The analysis seems to suggest this isn’t happening in some of those places. Other complex factors are also at play. In Canada, some research has found that the point in the season when snow is at its deepest is happening earlier and earlier in the winter. And snow seems to be melting faster once it’s on the ground. This could help explain why the overall trend in snow depth, when averaged across the entire winter, appears to be declining…”

New Climate “Normal” for Atlantic Hurricanes Shows More Frequent and Extreme Storms. A post at Capital Weather Gang caught my eye: “Every 10 years, the National Oceanographic and Atmospheric Administration revises the baseline of what weather and climate conditions are considered “normal.” The most recent normals for Atlantic hurricane activity will soon be released, and a preview reveals a spike in storm frequency and intensity. During the most recent 30-year period, which spans 1991 to 2020, there has been an uptick in the number of named storms and an increase in the frequency of major hurricanes of category 3 intensity or greater in the Atlantic. That comes as no surprise amid a spate of extreme hurricane activity that has featured seven Category 5 storms swirling across Atlantic waters in just the past five years…”

Want to Cut Emissions that Cause Climate Change? Tax Carbon. So says a new paper highlighted at Ohio State University: “Putting a price on producing carbon is the cheapest, most efficient policy change legislators can make to reduce emissions that cause climate change, new research suggests. The case study, published recently in the journal Current Sustainable/Renewable Energy Reports, analyzed the costs and effects that a variety of policy changes would have on reducing carbon dioxide emissions from electricity generation in Texas and found that adding a price, based on the cost of climate change, to carbon was the most effective…”

Can the Market Save the Planet? FedEx is the Latest Brand-Name Firm to Say It’s Trying. The Washington Post (paywall) has the story: “Amazon, Walmart, General Motors, and now FedEx. The giant delivery company joined more than 50 other major corporations when it announced this week that it too aims to be carbon-neutral by 2040 — an effort to curb climate change. Executives say that a gathering cultural change is fueled by companies responding not only to shareholders but also to the growing urgency of climate change and the concerns of their own employees and customers. On Wednesday, FedEx promised to be carbon-neutral by 2040, 10 years faster than the timeline laid out by the Paris climate accord. The company pledged an initial investment of $2 billion to start electrifying its massive fleet of more than 180,000 vehicles and $100 million for a new Yale Center for Natural Carbon Capture…”