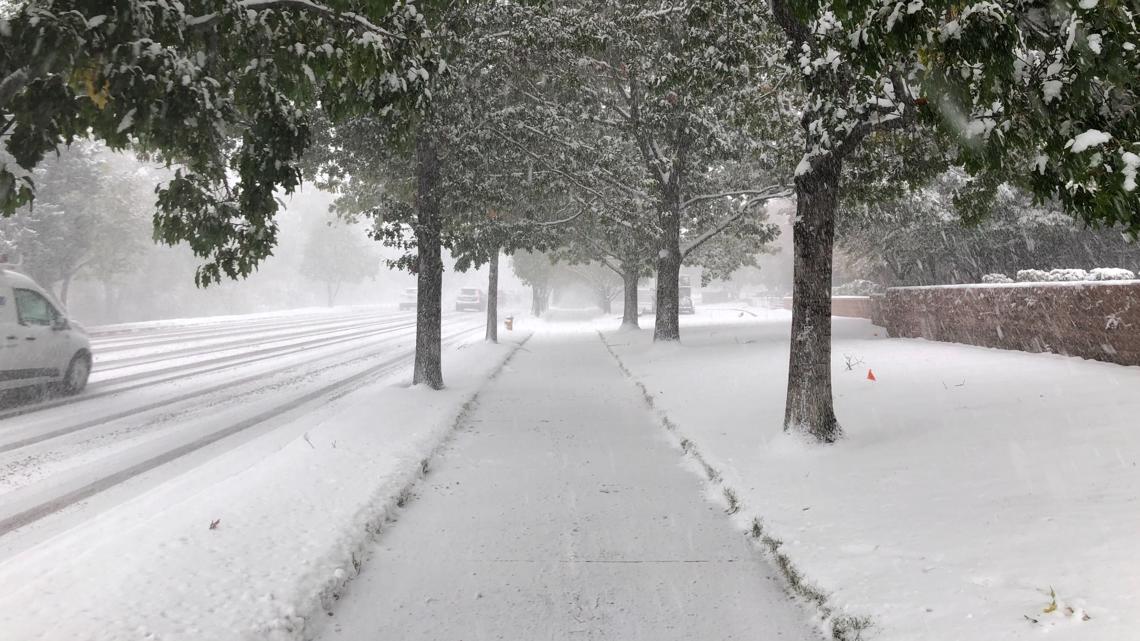 “Eye of the Storm”. This was one of my radar screens yesterday as tornadic storms were pushing over Northfield, showing a perfectly concentric “rain hole” over Wright county. Kind of odd, but it quickly dawned on me that this was the center of low pressure rippling northeastward, not some quirky inland hurricane sent here to terrify us.

Modified Pacific Flow. A few Canadian slaps, sure, but the flow is predicted to be roughly zonal into mid-March, meaning temperatures at or above normal across most of the Lower 48 states.

Heavy Snow From Wyoming to Minnesota

Winter Storm In The Central U.S. We are tracking the first of a couple winter storms today that’ll impact portions of the nation over the next few days. An area of low pressure will move from the Front Range this morning to southern Minnesota by the evening hours and over central Lake Superior Thursday morning. This will bring a swath of snow along with it from Wyoming into northern Minnesota.

Expected Snow. As noted by the scattered Winter Storm Warnings, there will be several areas along the path of the snow today into Thursday where 6”+ of snow will be possible, including out in Wyoming/western South Dakota, northeastern South Dakota, and northeastern Minnesota. This snow could cause difficult travel across the region.

Heavy Snow On The Way. Meanwhile, a second area of low pressure will move across the Rockies into the Central United States late this week into the weekend. This is expected to bring heavy, wet snow for areas of the central Rockies and High Plains as we head Friday through the weekend, with the potential of at least 12” of snow for the Front Range of Colorado and Laramie Range of Wyoming, stretching east into the High Plains of Colorado, Nebraska, and Wyoming. Models are continuing to show that some of these areas – including potentially the Denver metro – could see at least 1-2 feet of snow with this system. However, there is still uncertainty in regards with this system, as the amount of snow that could fall in a location will depend on the amount of moisture and the exact path that this system takes. There is also the potential of blizzard conditions across portions of this region depending on overall track. This is a storm to keep an eye on, as heavy snow does appear likely and it will likely bring a major impact to the region, including travel disruptions and potential power outages. We’ll provide more updates over the next few days.

U.S. Sees Coldest February Since 1989 Amid Global Temperature Dip. Capital Weather Gang has details: “…The cold in the U.S., combined with unusually frigid air across much of Eurasia, resulted in global warmth less pronounced compared to recent Februaries, according to a separate report released by the Copernicus Climate Change Service, a program of the European Commission. Copernicus found that globally, February averaged about 0.46 degrees (0.26 Celsius) above the 1981-2010 average and still 2.2 degrees (1.2 Celsius) above preindustrial levels, when averaged over the last 12 months. The planet’s average temperature was cooler compared to other recent Februaries, but still well above average, in keeping with trends related to global warming from human-caused greenhouse gas emissions. The relatively cool start to 2021 is a likely indication that the year won’t set another record for the warmest year, as 2016 and 2020 did…”

The Great Blind Spot in Hurricane Preparedness. The New Republic (and Washington Post) delve into the implications of a consistently longer hurricane season: “Hurricane season is creeping its way deeper into spring. Last month, The Washington Post reported that the National Oceanic and Atmospheric Administration is considering officially moving up the start of the storm season from June 1 to May 15. The move, being reviewed by the NOAA’s National Hurricane Office in Miami, is the result of experts coming to the conclusion that, as global temperatures have consistently risen, so too have the frequency of pre-June storms. According to the Post, the past six years have featured tropical storms forming before the official season start date, with last year’s Tropical Storm Arthur announced by the NOAA on May 16. By season’s end in December, 2020 ranked as the most active hurricane season in 15 years with 30 storms topping the 28-storm mark set by 2005. How to measure hurricane season, however, isn’t as tricky as the other question global warming is already raising in coastal communities: how to prepare for it...”

La Nina Could Supercharge This Year’s Tornado Season, Just Like It Did to Deadly Effect in 2011. CNN.com has perspective on what may shape up to be a busier-than-normal tornado season: “…Similar to this year, a moderate La Niña was the main feature in 2011. La Niña, and its counterpart, El Niño, can play a significant role in the position of the jet stream, temperature and precipitation patterns over the US, which all play a role in the formation of severe weather. The El Niño or La Niña conditions in winter months can be used to help pinpoint the tornado frequency during the peak of severe storm season in the spring, recent studies have found. “The flow of warm, humid air from the Gulf of Mexico increases in strength during springs that follow La Niña, which produces the fuel needed to form storms,” Jason Furtado, assistant professor of meteorology at the University of Oklahoma, said. “The stronger flow increases the low-level wind shear that also favors the formation of tornadoes and hailstorms.” The past several months have featured the strongest La Niña since 2011…”

Rating Tornado Warnings Charts a New Path to Improve Forecasts. Yes, there is always room for improvement, according to a post at phys.org: “…A study from the University of Washington and the National Oceanic and Atmospheric Administration describes a new way to rate and possibly improve tornado warnings. It finds that nighttime twisters, summer tornadoes and smaller events remain the biggest challenges for the forecasting community. “This new method lets us measure how forecast skill is improving, decreasing or staying the same in different situations,” said Alex Anderson-Frey, a UW assistant professor of atmospheric sciences. “The tornado forecasting community needs to know what we’re doing best at, and where we can focus training and research in the future...”

How Tornado Alley Has Changed. More big, destructive tornadoes are striking south and east of traditional Tornado Alley, according to data highlighted in a post at News Channel 6: “…One of the issues is there’s just a lot more people living in the southeast than there are in the plains,” said Allen Gerard, tornado researcher. “They tend to be more evenly distributed across the southeastern states and because of that you have more of a footprint for which tornadoes can cause damage to people’s homes and cause injuries and fatalities.” Tornado season is longer the Dixie Alley than in the traditional Tornado Alley and tornadoes also have a tendency to strike there at night. “The plains tornado risk tends to be more confined to a very specific time year, the late spring months of April, May, and early June and more confined to a particular time of the day, late afternoon into the evening,” said Gerard. “Whereas in the southeast, the risk is much more across the entire year and much more across the entire day...”

Sea Level Rise is Increasing Fastest in Populated Coastal Areas, Study Says. New research highlighted at CNN.com caught my eye; here’s an excerpt: “Coastal communities are experiencing sea level rise four times worse than global water rise, according to a new study released Monday. Groundwater pumping, extraction of materials from the ground and sediment production are all happening near the coasts and that is causing the land to actually sink — compounding the effects of a rising sea level. It is no coincidence that these are the same locations where people live, worsening the impacts and increasing the vulnerability. Many of the largest, most populated cities in the world are built along the deltas of major rivers, where there is the added exposure of rivers connecting to the ocean. Much of the coast is uninhabited by people, but where there is civilization, there tends to be a greater rise in water levels...”

The Tide is High – And Getting Higher. A post at WIRED.com (paywall) explains: “…A new study shows that nuisance flooding is exacerbated by dredging and the construction of piers and jetties that were intended to make coastal living easier but are in fact redirecting the flow of incoming ocean water and making high tides higher than ever before. Published Friday in the journal Science Advances, the study compared high and low tide ranges measured during the past 70 years with an older database of historic tidal measurements made in the mid-1800s and recently found in stacks of old boxes stored in an annex of the National Archives in College Park, Maryland. The researchers found that out of 40 coastal tide gauges operated by the National Oceanic and Atmospheric Administration (NOAA), nearly half had measured more nuisance flooding days because of higher local tide ranges. Cities built along coastal estuaries showed the biggest tidal changes…”

Climate Kids Shift Legal Gears: Headlines and links via Climate Nexus: “A group of youth climate activists who sued the U.S. government in 2015 are changing tactics in their fight to force the feds to address climate change. Twenty one young plaintiffs on Juliana vs. United States, who now range in age from 13 to 24, on Tuesday filed a motion in U.S. District Court in Oregon, asking to be allowed to amend the aims of their case. The original case argued the Constitution provides the right to live in a sustainable climate, and demanded courts order the government to create and execute a climate recovery plan. Following a “reluctant” rejection for a full hearing by 9th Circuit Court of Appeals last year, in part on the basis that federal judges lack the power to order the complex policy solutions they sought, the activists are narrowing their goals. Instead, they will ask the court to rule the U.S. energy system violates their constitutional rights to due process and equal protection under the law, and to order the U.S. government to establish a plan to transition off of fossil fuels.” (The Oregonian, Politico Pro $)

As Climate Scientists Speak Out, Sexist Attacks Are on the Rise. It’s 2021 and THIS is still happening – here’s an excerpt from a post at Scientific American: “One scientist was called Climate Barbie. Another was described as an “ugly fake scientist.” A third had an erect penis drawn on her car window while she was in the field researching sea-level rise. Such is the life of many female climate scientists in 2018. All researchers face the risk of being criticized when speaking publicly about their findings. But women in the field describe being attacked based on their gender. They’ve endured insults, sexual taunts and degrading comments about their professional acumen. Most of their harassers use social media, email and the phone for their attacks. But there’s a fear that it could become physical…”

Climate Change Will Reshape Silicon Valley as We Know It. Another worthy post from WIRED.com; here’s a clip: “…Climate change is the defining crisis of our time, and as it becomes more imminent, our efforts to address it will become the epicenter of the next entrepreneurial revolution. The recent news that Elon Musk is dueling with Jeff Bezos for the title of world’s richest person is a harbinger of what will be the biggest VC opportunity of the 21st century. Electric vehicles are only the tip of the iceberg. A recent PwC report found that climate tech investment increased from $418 million per year in 2013 to $16.3 billion in 2019, growing at five times the venture capital market rate over the last seven years. Heating and cooling systems, agriculture, raw materials, and manufacturing are all overdue for reinvention as we strive for a greener future, creating the promise of even more innovation on the horizon...”