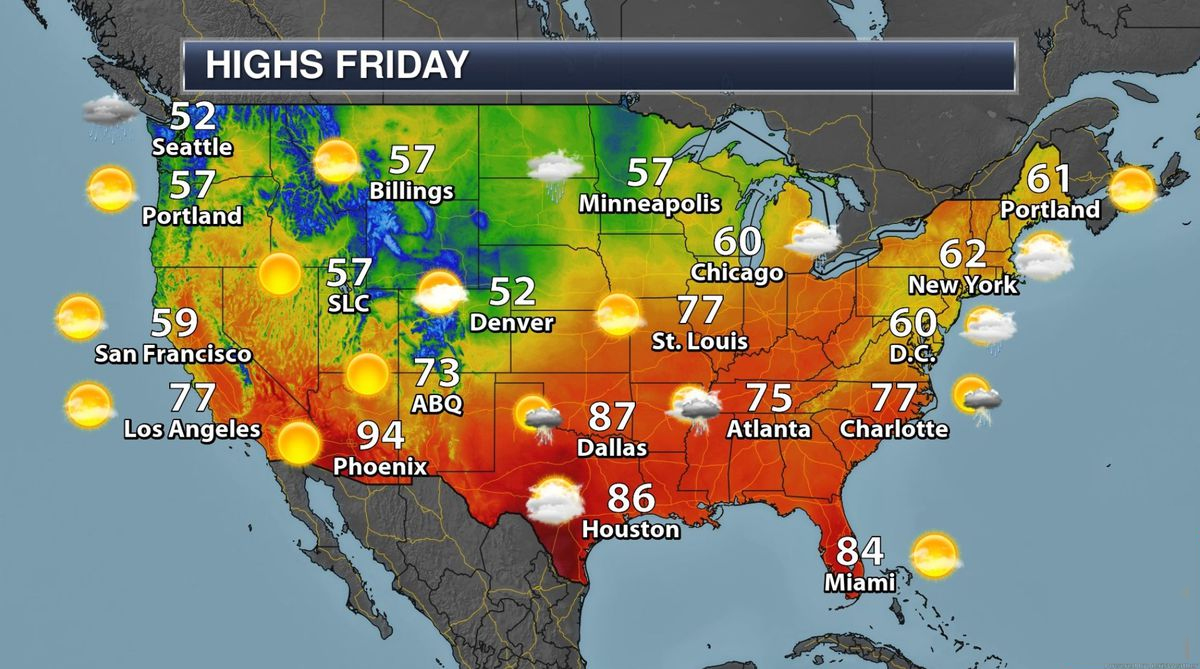 Mellowing Pattern by Late April. The GFS model suggests a relatively benign pattern within a couple of weeks, with an active southern branch of the jet stream igniting frequent severe storm outbreaks over the southern USA, but relatively mild weather over the central USA.

Colorado State University: Busier Than Average Hurricane Season. Here’s an excerpt from CSU’s press release: “We anticipate that the 2021 Atlantic basin hurricane season will have above-normal activity. Current weak La Niña conditions may transition to neutral ENSO by this summer/fall, but the odds of a significant El Niño seem unlikely. Sea surface temperatures averaged across the tropical Atlantic are currently near average, while subtropical Atlantic sea surface temperatures are warmer than normal. We anticipate an above-average probability for major hurricanes making landfall along the continental United States coastline and in the Caribbean. As is the case with all hurricane seasons, coastal residents are reminded that it only takes one hurricane making landfall to make it an active season for them. They should prepare the same for every season, regardless of how much activity is predicted...”

Very Active, Possibly Impactful 2021 Hurricane Season Forecast: WeatherBELL. Colorado State isn’t alone; private weather firms are also predicting a busy hurricane season based on a lingering La Nina signal, according to Artemis.bm: “…WeatherBELL believes that La Nina will continue to be a factor through the 2021 Atlantic hurricane season, saying they expect “some form of a La Niña or at least shadow of it.” They point to the chances of the 2021 Atlantic hurricane season seeing impacts further to the east than last year’s season saw, saying “there is some weak correlation to storms moving farther to the east in second-year La Niñas.” As well as the chances of storms moving towards the eastern seaboard, WeatherBELL also warns of the chances of in-close development during the 2021 season. With a gut feeling that most of the hurricane season action will be seen between New Orleans and Cape Hatteras, “The specter of in-close development is rearing its ugly head...”

Western Drought Intensifies. Climate Central has perspective on deepening drought conditions across most of the western U.S.: “In 2020, the U.S. slipped into the most widespread drought since the summer of 2013. Mountain snowpack, which is an essential source of water for Western rivers and reservoirs, has declined by an average of 15-30% across the West since 1955. Groundwater reserves that act as a buffer in bad drought years are also becoming depleted. The rate of water withdrawal outpaces the rate at which they are recharged by rainfall, creating an increasingly unsustainable situation which is only worsened by climate change. At over $9 billion per event, drought has the second-highest price tag of any type of billion-dollar disaster event since 1980. In addition to combating climate change, sustainable water management strategies need to be implemented to maintain water security — in the U.S. and beyond…”

NOAA: CO2 Levels Highest in 3.6 Million Years. This nugget didn’t lead the news, but it should have. Details in a post at NOAA Research: “…Since 2000, the global CO2 average has grown by 43.5 ppm, an increase of 12 percent. The atmospheric burden of CO2 is now comparable to where it was during the Mid-Pliocene Warm Period around 3.6 million years ago, when concentrations of carbon dioxide ranged from about 380 to 450 parts per million. During that time sea level was about 78 feet higher than today, the average temperature was 7 degrees Fahrenheit higher than in pre-industrial times, and studies indicate large forests occupied areas of the Arctic that are now tundra. “Human activity is driving climate change,” said Colm Sweeney, assistant deputy director of the Global Monitoring Lab. “If we want to mitigate the worst impacts, it’s going to take a deliberate focus on reducing fossil fuels emissions to near zero – and even then we’ll need to look for ways to further remove greenhouse gasses from the atmosphere...”

Senator Bernie Sanders Wants Fossil Fuel Execs to Testify to the Budget Committee. CBS News reports; here’s an excerpt: “…In 2019, the independent research organization Climate Accountability Institute ranked the world’s leading oil, gas, and coal companies and their collective carbon emissions dating back to 1965. They found that 20 international companies accounted for more than a third of all global emissions in that span. In that group of 20, Chevron was the leading investor-owned company, with ExxonMobil and BP close behind. According to the Environmental Protection Agency, the largest source of greenhouse gas emissions from human activities in the U.S. is from burning fossil fuels — crude oil, coal, dry natural gas and natural gas plant liquids — for electricity, heat and transportation. America is the second leading global greenhouse gas emitter, behind China...”

How Biden’s Zero-Carbon Revolution Would Broaden the Energy Map. CNN Politics has the analysis; here’s an excerpt: “…Included in Biden’s massive $2 trillion infrastructure package is a provision that would require every state to generate all of its electricity by 2035 from fuels that do not produce any of the carbon emissions linked to global climate change. Such a transition would trigger a massive spending boom in wind and solar power — at least doubling the pace of investment now underway — and that could disperse opportunity for energy-related jobs across many more states than benefit today, energy experts say. The reason: While relatively few states now dominate the production of the oil, coal and natural gas that currently provide most of the nation’s power, far more states are positioned to generate significant amounts of solar, on- or off-shore wind and other sources of carbon-free power, according to a recent study by the Decarb America Research Initiative that modeled the nation’s energy usage through 2050 under a plan like Biden’s...”

Spiking Atmospheric Methane Levels ‘Very Scary Indeed’: Climate Nexus has headlines and links: “Atmospheric methane levels surged in 2020, a new report from NOAA shows, accelerating an increasing trend, alarming scientists, and possibly auguring a vicious cycle of global heating. NOAA also announced global atmospheric carbon dioxide levels are higher than at any point in the last 3.6 million years. “It is very scary indeed,” Euan Nisbet, professor of earth sciences at Royal Holloway University of London, told the Financial Times. About 60% of methane emissions are caused by human activity, and U.S. oil and gas operations are a major driver of recent methane pollution increases. “Although increased fossil emissions may not be fully responsible for the recent growth in methane levels,” NOAA research chemist Ed Dlugokencky said in a statement, “reducing fossil methane emissions are an important step toward mitigating climate change.” Methane is a far more potent heat-trapping gas than carbon dioxide, and scientists are worried global warming could be triggering accelerated methane releases from tropical wetlands and melting arctic permafrost. “Our path to net zero is obvious, challenging and necessary,” Martin Siegert, a professor at the Imperial College London, told the Guardian, “and we must get on with the transition urgently.” (FT $, USA Today, The Guardian, The Hill, CBS; Climate Nexus backgrounder)

More Lightning in the Arctic is Bad News for the Planet. WIRED.com (paywall) explains why: “…The Arctic has gone so bizarro that lightning—a warm-weather phenomenon most common in the tropics—is now striking near the North Pole. And according to new modeling, the electrical bombardment of the region will only get worse. By the end of the century, the number of lightning strikes across the Arctic could more than double, which may initiate a shocking cascade of knock-on effects—namely, more wildfires and more warming. “The Arctic is a rapidly changing place, and this is an aspect of the transformation that I’m not sure has gotten a whole lot of attention, but it’s actually really consequential,” says UCLA climate scientist Daniel Swain, who wasn’t involved in the research...”

Study: Drought-Breaking Rains More Rare, Erratic in US West. Associated Press has the story; here’s an excerpt: “Rainstorms grew more erratic and droughts much longer across most of the U.S. West over the past half-century as climate change warmed the planet, according to a sweeping government study released Tuesday that concludes the situation is worsening. The most dramatic changes were recorded in the desert Southwest, where the average dry period between rainstorms grew from about 30 days in the 1970s to 45 days between storms now, said Joel Biederman, a research hydrologist with the U.S. Department of Agriculture Southwest Watershed Research Center in Tucson, Arizona. The consequences of the intense dry periods that pummeled areas of the West in recent years were severe — more intense and dangerous wildfires, parched croplands and not enough vegetation to support livestock and wildlife...”

Sea-Level Rise is Killing Trees Along the Atlantic Coast, Creating “Ghost Forests” Visible from Space. Sea level rise and increased salinity are taking a toll on coastal wetlands and forests. The Conversation has the post; here’s an excerpt: “…As global sea levels continue to rise, coastal woodlands from the Gulf of Mexico to the Chesapeake Bay and elsewhere around the world could also suffer major losses from saltwater intrusion. Many people in the conservation community are rethinking land management approaches and exploring more adaptive strategies, such as facilitating forests’ inevitable transition into salt marshes or other coastal landscapes. For example, in North Carolina the Nature Conservancy is carrying out some adaptive management approaches, such as creating “living shorelines” made from plants, sand and rock to provide natural buffering from storm surges...”

Waves of Abandonment. The Permian Basin is ground zero for a billion-dollar surge of zombie oil wells, Grist reports. Here’s an excerpt from their post: “...Texas and New Mexico have already identified about 7,000 abandoned wells that were once operated by over 1,000 companies. State officials estimate these will cost $335 million to plug. The states define wells as “orphaned” if they don’t have an approved operator on record; additionally, Texas only includes wells that haven’t produced in at least a year. However, a healthy chunk of roughly 100,000 “idled” wells in those states could also eventually end up abandoned. (This article uses the term “abandoned” to encompass wells on the states’ orphan lists as well as inactive wells we found to be in disrepair.) Exactly how many wells will end up on the states’ rolls is an open question…”

Did Climate Change Cause Societies to Collapse? New Research Upends the Old Story. More original reporting from Grist.com: “…A report recently published in the journal Nature argues that an obsession with catastrophe has driven much of the research into how societies responded to a shifting climate throughout history. That has resulted in a skewed view of the past that feeds a pessimistic view about our ability to respond to the crisis we face today. “It would be rare that a society as a whole just kind of collapsed in the face of climate change,” said Dagomar Degroot, an environmental historian at Georgetown University and the lead author of the paper. The typical stories of environmentally-driven collapse that you might have heard about Easter Island or the Mayan civilization? “All those stories need to be retold, absolutely,” he said…”