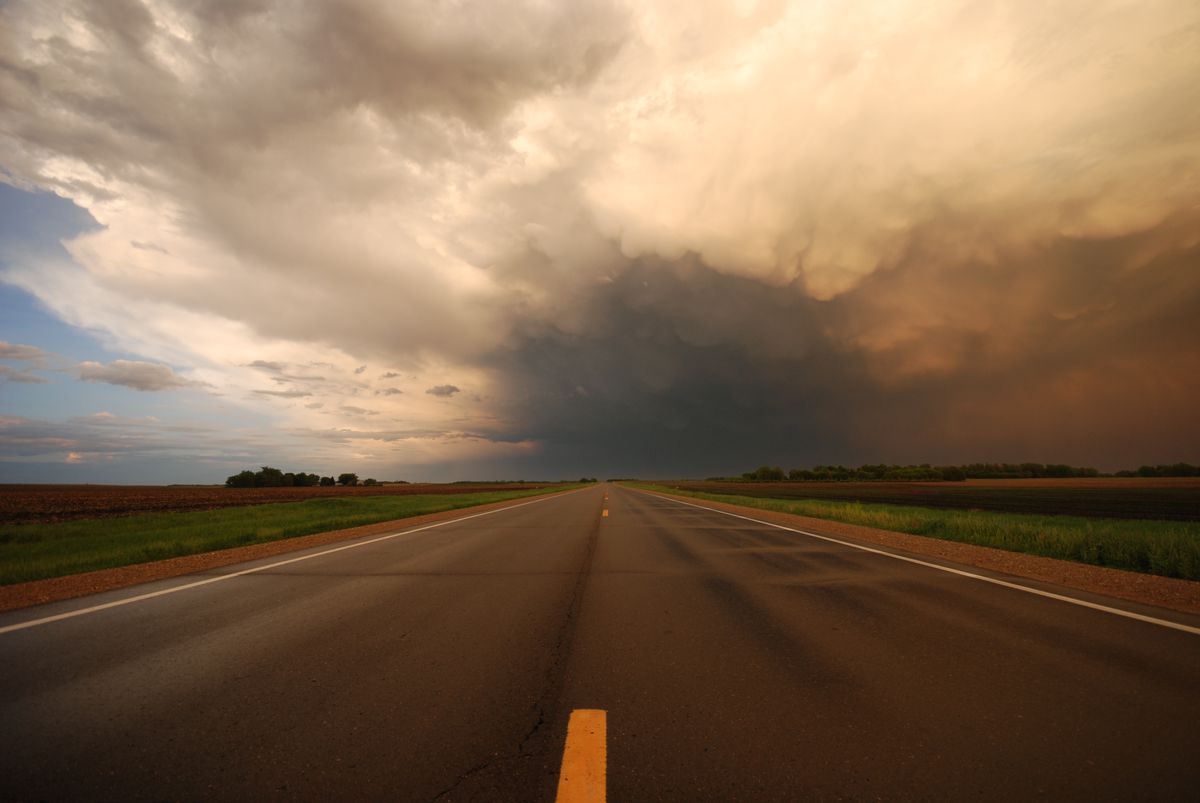 With apologies to The Beatles, Minnesota’s transition to summer is a long and winding road, littered with stormy potholes.

It often comes down to situational awareness – keeping tabs on the weather pattern and listening for county-specific watches and warnings. But don’t neglect gut feel.

In August of ‘09 conditions were ripe for twisters. I remember watching the sky turn green, running down to our dock and taping the formation of a tornado, roughly 5 minutes before the sirens sounded.

A green tint to the sky may be the result of large hail. Tornado-producing storms usually have violent updrafts that favor big hailstones.

From My Dock. Not what I expected to see, but a small EF-1 to EF-2 strength tornado did spin up over Orono the evening of August 8, 2009. I remember the green sky preceding the tornado, and an odd feeling of foreboding.

Not Summer Yet. A few more chilly corrections may be in the cards for northern tier states into mid-May, if you buy into ECMWF model solutions. GFS is trending milder than The European, and I sincerely hope it’s correct.

Extreme Drought As Close as the Dakotas. Remind me not to complain about the rain, even if it’s falling on a Saturday afternoon. Drought conditions are deepening across the western half of the USA.

10 Years After April, 2011 Tornado Super Outbreak, 16 Things We Will Never Forget. The Weather Channel has the look back; here’s the intro: “The April 25-28, 2011, Super Outbreak remains one of the worst tornado outbreaks in United States history. This single outbreak claimed over 300 lives, injured 2,775 and was responsible for $12 billion in total damage, making it the costliest tornado outbreak in U.S. history. Ten years later, there are jaw-dropping facets of this massive outbreak that remain burned in the memory of the meteorologists and journalists on our team – here’s a list of them…”

John Kerry Calls on Scientists to Lead Fight Against Climate Change Denial. Note to self: climate scientists have been doing this for over a generation now. Thomson Reuters Foundation reports: “Widespread mistrust of science and disputes over basic facts, tied to growing political polarization and disinformation campaigns, are undermining efforts to tackle climate change globally, U.S. climate envoy John Kerry warned. During a virtual summit organized by the Nobel Foundation and major science academies this week, Kerry said building greater public understanding and agreement on the world’s “existential” challenges was crucial to addressing them. “We have to establish a baseline of truth or we can’t build consensus in a democracy,” he said. “Paid-for denial” about climate change by big polluters and political disregard by some governments of scientific warnings about COVID-19 risks are “costing us enormously”, he added...”

Climate Tipping Points May Have Been Reached Already, Experts Say. CBS News has the story; here’s the intro: “Through decades of research, and now lived experience, it has become clear that the impacts of climate change will have drastic and far-reaching consequences on our planet. And while some of those consequences are predictable — like more extreme weather, sea-level rise and loss of biodiversity — the pace at which these unfold and their eventual severity hinge on what happens with key linchpins in the climate system, called tipping points. A tipping point is a threshold or point of no return in the climate system that once passed can no longer be reversed. Passing a tipping point does not necessarily mean immediate, drastic consequences, but it does mean those consequences become unavoidable, and over time the impacts may be dramatic…”

Glaciers Are Melting More Rapidly, Risking Floods and Droughts. Bloomberg Green has the story: “The world’s glaciers are shrinking at a faster rate than before, with densely-populated parts of Asia at risk of flood and water shortages if the trend continues. That’s the conclusion of a new study by ETH Zurich and University of Toulouse researchers, who found the world’s ice fields lost 298 gigatons of ice per year from 2005 to 2019, a 30% increase in the rate of retreat compared with the previous five years. Glaciers in Alaska, the Alps and Iceland are among those disappearing at the fastest pace. “The situation in the Himalayas is particularly worrying,” said Romain Hugonnet, one of the study’s authors, adding that swathes of India and Bangladesh could face water stress during dry periods when major rivers like the Ganges and Indus are mainly fed by glacial runoff…”

Anne Arundel Follows Annapolis – Sues Oil and Gas Companies Over Climate Change. Expect more cities and states to turn to litigation in the months and years ahead. Here’s an excerpt from Capital Gazette in Annapolis, MD: “Anne Arundel County is following Annapolis by suing more than two dozen oil and gas companies over their role in contributing to climate change. The county Office of Law filed a lawsuit Monday against some of the biggest names in the fossil fuel industry — ExxonMobil, Chevron, BP, Shell and others — to hold them financially responsible for what it calls the “costs and consequences” of climate change and attempts to cover up the truth about its impacts on the environment…”

Maryland County Sues Big Oil: Climate Nexus has headlines and links: “Anne Arundel County, Maryland, is suing more than two dozen oil and gas companies and API for covering up what they knew to be the truth of their products’ impact on global warming and, seeking to hold them liable for the “costs and consequences” of climate change. Anne Arundel is home to Maryland capital Annapolis, which filed a similar lawsuit in February and is one in a drumbeat of suits filed by states and municipalities across the country.” (Capital Gazette, Maryland Matters, WTOP, E&E $)

“Time to Shake Things Up”: Music Industry Confronts Climate Crisis as Gigs Resume. The Guardian has an interesting post about reducing carbon footprints and raising climate awareness: “Before the pandemic struck, it wasn’t uncommon for DJs to fly between three European cities in a weekend. The carbon footprint of globetrotting tours was massive. Festivals and gigs were criticised for the levels of waste they created. Streaming services, requiring ever more processing power, have had a burgeoning impact, as has the recent craze of selling music via NFTs (non-fungible tokens). But a series of announcements last week, coordinated by the Music Declares Emergency collective, have challenged the idea that the industry is not taking the climate emergency seriously. After a uniquely difficult year for those in live music, perhaps this is an inflection point: can the recovery from Covid-19 be green?…”

White House Pushing for 80% Clean U.S. Power Grid by 2030. Reuters has details: “The White House hopes to capitalize on growing support from U.S. utilities, unions and green groups for a national clean energy mandate by pushing Congress to pass a law requiring the U.S. grid to get 80% of its power from emissions-free sources by 2030, according to a senior administration official. The goal would fall short of President Joe Biden’s stated ambition of net zero carbon emissions in the grid by 2035, but is an interim milestone that could be passed without Republican support through a process called budget reconciliation. “Our goal is to enact this into law,” deputy White House climate adviser Ali Zaidi told Reuters. “There are multiple pathways to get meaningful progress in the power sector…”

Biden’s Climate Summit Launches the World Into a Climate Sprint. Here’s some perspective from TIME.com: “…Kerry’s visit to China yielded a joint statement saying the two countries are “firmly committed to working together.” When the summit finally rolled around in April, a handful of countries were ready to announce new climate targets. Canada upped its commitment to slash emissions to at least a 40% reduction from 2005 levels by 2030. Japan said it would aim for a 50% cut from 2013 levels by the end of the decade. The most important commitment, of course, came from the U.S.: the Biden Administration said the country would reduce its greenhouse gas emissions by at least 50% by 2030 from 2005 levels, a significant ramp up from the U.S.’s Obama-era plan...”

Joe Biden is Not Coming For Your Poorly-Cooked Hamburger. Oh thank God! No need to guard my back yard grill – that’s a huge relief. Here’s an excerpt from Earther: “Folks, Joe Biden is bringing big government into the kitchen. Your kitchen. Sleepy Joe, he’s coming for your sweet, beautiful meat. Your fridge, it’s going to be full of kale after Biden is done cleaning out your delicious hamburgers and Angus sirloin. Filet mignon? It’s gonna be a thing of the past in Biden’s America. Maybe you get it once a year—if you win the meat lottery. (You probably won’t because you know they rigged it. #StoptheVealSteal) Your grill? Forget about it, unless you want to put some turnips on it...”

Climate Change is a Bigger Challenge for Construction Than Covid-19. Say what? Here’s an excerpt of an Op-Ed at Global Construction Review that caught my eye: “…There will be a great deal of disruption from projects and built environment initiatives that are late, delayed or cancelled entirely as a result of the pandemic, requiring careful dispute resolution that, though precipitated by Covid-19, will be overtaken by issues surrounding a project’s green credentials going forward. In other words, while the pandemic has forced a pause in proceedings for which there will be legal ramifications in the short-term, climate change will be our greatest challenge and have a profound effect on how we build long into the future...”