“The sea, once it casts its spell, holds one in its net of wonder forever.” wrote explorer Jacques Cousteau. The world’s oceans are a wonder indeed, but rising tides, increasingly powerful storms and wind-whipped waves pose new risks for the ships that power the world’s economies. An estimated 80% of the world’s commerce arrives by ship, an estimated 50,000 merchant ships registered in nearly 150 countries. Tracking changes in weather for optimal routing and storm-avoidance has never been more mission-critical to keep the global economy humming along.

Maritime Transport Operators increasingly rely on sophisticated software for safe sailing, leveraging a wide range of weather services to set expectations about wind, waves, and possible weather extremes during every voyage. It was the sinking of the “Titanic” in 1911 that led to The International Convention for the Safety of Life at Sea (SOLAS), the first international system for the collection of meteorological observations from the oceans, an analysis of weather and ocean observations and broadcast of meteorological bulletins for shipping. Over the years, The International Meteorological Organization, its successor WMO, and maritime organizations, developed a coordinated system of marine forecast and warning services covering both coastal waters and the high seas, connected via a network of satellite and terrestrial data sources.

Today the numbers are staggering: from microchips to winter wheat to automobiles, massive ships ferry close to 20 million containers around the world, making over 200 million trips every year! Sophisticated GPS systems provide smart routing, but the wild card is always the weather. A new generation of massive (taller) container ships, some 200 feet above the water level, are increasingly vulnerable to strong winds and massive waves.

A rapidly changing climate introduces new risks into the calculus of safely transporting goods across the world’s oceans. Warmer temperatures and more heat extremes during the summer months can impact staff, rising tides are already forcing many ports to retrofit docks, arctic warming may be influencing the prevailing winds that operators rely on to operate as quickly and efficiently as possible, warmer air is unleashing heavier rains, and consistently warmer ocean water may be fueling a new generation of stronger hurricanes, worldwide. Tropical cyclones get their energy from warm water. The warmer the water, the greater the potential for intensification. 2020 brought a record 30 tropical storms and hurricanes to the Atlantic basin. Even though we may not experience more hurricanes in the future, climate models predict the storms that do form may tend to be more intense, threatening coastal populations and ships at sea. 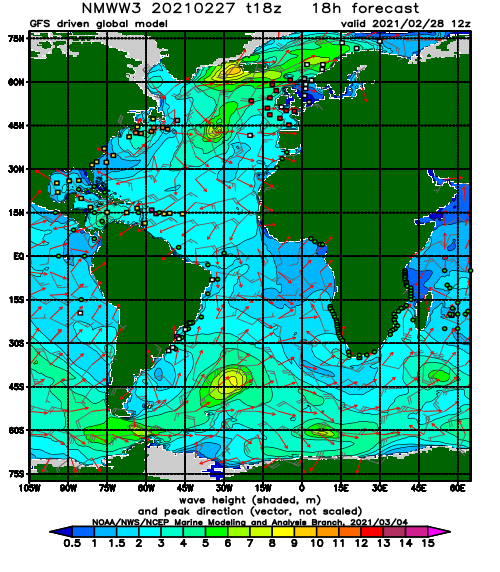 New times require new tools. NOAA’s upgraded GFSv16 weather model, which goes out 16 days into the future and crunches the latest data 4 times daily, includes GFS-Wave, incorporating high-resolution ocean data gathered from a myriad of sources (ocean buoys, ships and satellites) along with advanced physics upgrades, to provide a more detailed and reliable forecast of winds and wave heights for maritime operations, down to the hour.

Private weather companies are providing continuous streams of updating weather data via APIs and high-resolution graphics, to help set expectations and highlight zones where future weather may impact daily operations for maritime transport. This data can be overlayed over proprietary in-house software to enhance situational awareness, ensuring that captains receive actionable weather information well in advance of any weather hazards along the projected route of travel.

It is an old axiom, but what worked in the 1970s probably will not work in the 2020s and 2030s. A warmer, more volatile climate is flavoring all weather now. Maximizing safety and minimizing risk in a new weather-on-steroids world requires both vigilance and weather intelligence. The extended outlook calls for more weather volatility, and increasingly accurate and actionable forecasts delivered in real-time to the ships that ply the world’s oceans.