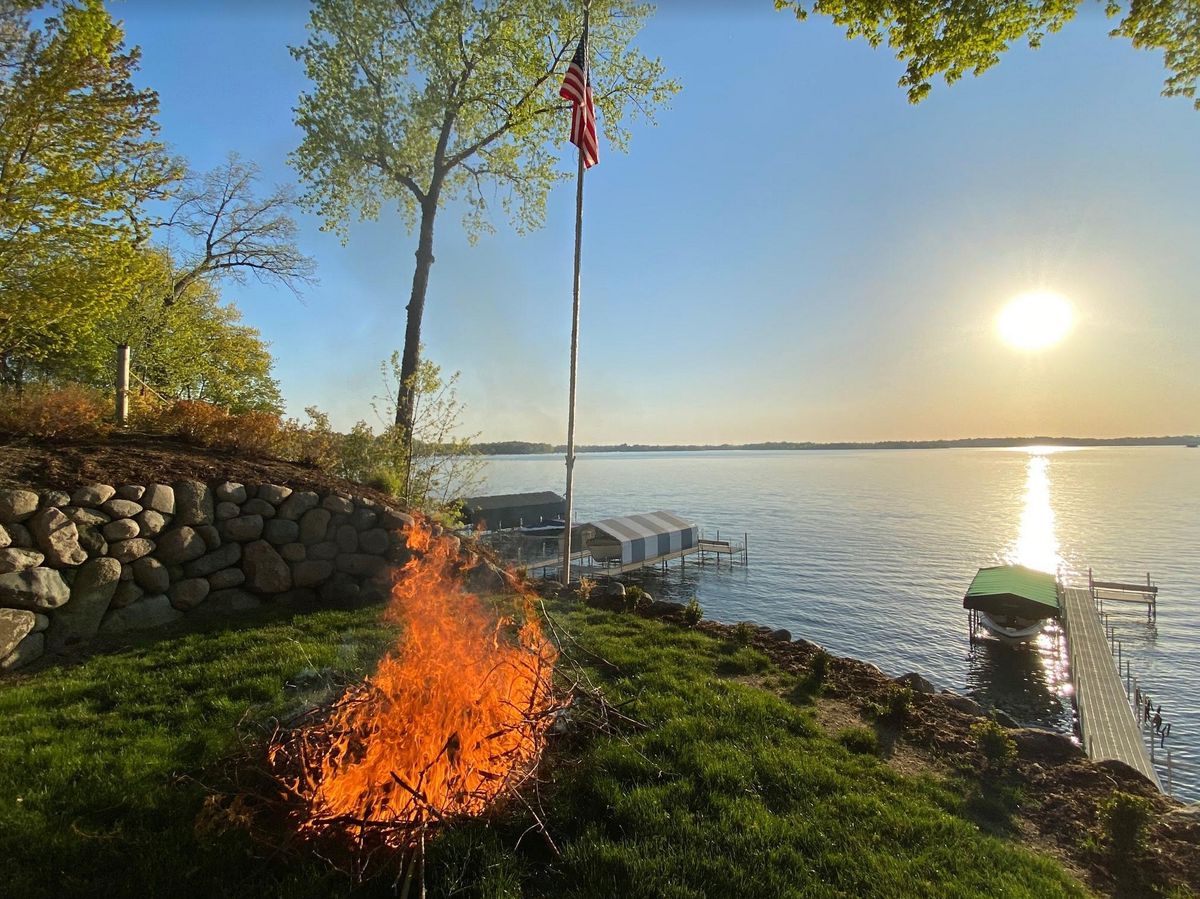 It’s May, As In It MAY Warm Up

It’s May. As in it MAY be nice. Or it MAY snow a little. Or Flood. Or tornado. May is manic and momentous, a meteorological gateway drug to summer.

I’m a summer guy, but there is something to be said for May, before the bugs, jungle-like humidity, sputtering thunderstorms and beachball-size hail. A prologue to summer: a dash of warmth, without all the unpleasant side effects.

Mostly-Dry, Mostly-Average Fishing Opener. Although a stray shower can’t be ruled out Saturday, Sunday looks like the wetter day with a better chance of showers and T-storms. Expect morning temperatures in the 40s and highs in the 60s, just a few degrees cooler than average.

2021 Minnesota Fishing Opener Historical Facts. The Minnesota DNR always does a great job putting weather into context. No ice or flurries for the Opener this year: “Across Minnesota, 2021’s ice-out dates ranged two to three weeks ahead of the median across most of the state, with only far northeast Minnesota about a week ahead of the median dates calculated since 1950. By April 30, the lone holdout was Greenwood Lake in Cook County, the final piece of the 11,842 lake ice out puzzle. The 2021 Minnesota Governor’s Fishing Opener will be in Otter Tail County. The lakes in Otter Tail County were ice-free by the first week in April. Ice-choked lakes have dogged fishing openers of the past, including as recently as 2013. The 1950 opener was one of the worst known, with iced-over lakes extending to Mille Lacs, Osakis, and the Brainerd Lakes area. That year produced many of the late ice-out records for lakes with long records. Other years with ice on northern lakes include: 1966, 1979, 1996, 2008, and 2009...”

Moderately Mild. If GFS verifies (place your bets) temperatures will be close to average over northern tier states the last week of May, significantly hotter than average for much of the southern USA. Within 2 weeks 70s should be the norm with a few days in the 80s.

Summer Temperature Anomalies. This is one of many climate models showing a hot bias for much of the USA from June through August. Nearly all the NOAA models I’ve seen show hotter than average – it’s a matter of degree. A cool spring does not, automatically, imply a cool summer.

Western Drought Intensifying. More headlines and links via Climate Nexus: California governor Gavin Newsom expanded an emergency drought declaration from two to 41 of the state’s 58 counties on Monday. About 40 million people, around 30% of the state’s population, now live under a drought emergency that Newsom said is likely to expand. “The hots are getting a lot hotter in this state, the dries are getting a lot drier,” Newsom said. “We have a conveyance system, a water system, that was designed for a world that no longer exists.” (AP, Sacramento Bee, San Francisco Chronicle, LA Times $, CAL Matters, Mercury News, Deadline, Axios, Reuters, The Hill; Climate Signals background: Drought, Wildfires)

Summer Precipitation Probabilities. Drought is already intense across much of the western USA and NOAA suggests a dry trend may amplify over the summer west of Minnesota, with a wetter bias predicted for the eastern USA.

25th Anniversary of “Twister”, The Movie. ”Hey Bryce, you better get over here and take a look at this!” 13 words that changed my life forever. Well, not really. That was my line in the movie, “Twister”, which came out 25 years ago. Director Steven Spielberg used software from a previous weather company for “Jurassic Park”. His team reached out again for “Twister” and we created new, tornado and supercell-centric graphics and special effects for control room scenes. I was drafted to have a line in the movie, and I wasn’t about to say no. The weather control room shots were filmed in a retrofitted barn outside Ames, Iowa. While there, the director drafted me for a part, but if you blink you’ll miss it. PS: they shot the movie during a blistering heat wave. If you look carefully you can see shadows during the tornado chase scenes. It was 100F when they filmed my scene, turning off the A/C each time, which created a lot of very sweaty actors and extras.

“Take 9”. It only took 9 takes before I said my line “Hey Bryce, you better get over here and take a look at this!” with such power and conviction that the director shook his head, muttered something (in Dutch) and then moved on to the next scene. Good memories.

My take: making a movie is hours of boredom, interrupted by a few seconds of sheer terror.

NOAA Delivers New U.S. Climate Normals. The 30-year “averages” have shifted from 1981-2010 to 1991-2020, according to NOAA, which explains some of the shifts, factoring the latest decade of U.S. weather: “…In the transition to the new set of Normals, shifts in the relative frequency of above- and below-normal conditions will occur. Shifts will be most discernible in areas of the country undergoing substantial warming in the last decade, as experienced in the West and Florida. In those cases, comparisons of averages to current conditions will trigger below-normal temperature days more frequently. This does not mean that conditions are “colder” in the absolute sense; in actuality, higher averages have raised the bar for warmth…”

Your City Just Got Hotter. NOAA Announces New Climate Normals. CNN.com has more perspective: “The new climate normals released by National Oceanic and Atmospheric Administration on Tuesday reveal that weather across the US is warming. The current normals data set, which represent the average temperature, precipitation and rainfall for 1991 through 2020, highlight that most of the country has warmed compared to normals for 1981 through 2010, except for the north-central US. The West is becoming drier and the East is turning wetter. NOAA releases the climate normals every 10 years and they reflect data from the past 30 years…”

Offshore Wind Comes to Massachusetts. On federal land, the turbine farm should provide enough electricity to power 400,000 homes. Details via Nexus Media News: “The Biden administration will resume permitting review for the 800MW Vineyard Wind project off Massachusetts, the Bureau of Ocean Energy Management announced Wednesday. Officials said the process will pick up where it left off after the previous administration canceled the review in its final weeks. The project, which is the farthest along of the nearly dozen offshore wind farms under BOEM consideration, would generate enough electricity to power roughly 400,000 homes. “Offshore wind has the potential to help our nation combat climate change, improve resilience through reliable power, and spur economic development to create good-paying jobs,” BOEM Director Amanda Lefton said in a statement. “BOEM is committed to conducting a robust and timely review of the proposed project…”

The U.S. Owes a Massive Climate Debt. One Way to Pay It: Let in Climate Migrants. Fast Company makes the argument: “The United States has generated more heat-trapping carbon pollution than any other nation, but it has not felt the impact of climate change in equal measure. Poorer countries in warmer latitudes are enduring the most devastating droughts, heat waves, and violent storms, and seeing more poverty, disease, and mass migration as a result. By doing so much to fuel climate change, the United States has incurred a massive debt to the developing world, and there is no easy way to pay down the balance. President Biden is trying, but in a country that is largely opposed to more foreign assistance, he faces significant hurdles to ramping up aid...”

“Survive the Future” Online Game Makes Climate Choices Real. Gizmodo Earther has details: “…You are the senior editor of the world’s most popular and trusted news organization. You have the enviable power to set the news agenda, and thereby shift the zeitgeist.” So reads the introductory text to Survive the Century, an online game. Also my dream bio, but I digress. What follows is a Choose Your Own Adventure-style series of prompts that allows you to game out the next decade as the world battles the pandemic, climate change, inequality, and conflict. At the end, you get to read the headlines from 2030 based on the stories and ideas you championed for the public. It’s a novel way to make the big forces that shape our world manageable, putting them in the hands of everyday people—and it allows players to imagine how to change course from our current destructive one…”

Faulty Weather Forecasts Are a Climate Crisis Disaster. The forecasts will never be perfect, but they will get better – but how to leverage state of the art simulations for higher confidence predictions of solar, wind and other renewables. A story at WIRED.com (paywall) caught my eye: “…Jack Kelly thinks he knows a way to vastly improve these predictions. A former researcher at DeepMind, the Alphabet-owned artificial intelligence firm, in 2019 Kelly cofounded Open Climate Fix, a nonprofit focused on reducing greenhouse gas emissions using machine learning. “I’m a machine-learning researcher who’s terrified by climate change and keen to do everything possible to try and fix it,” Kelly says. He estimates that better solar forecasts in the UK could save 100,000 tonnes of carbon dioxide from being emitted each year, and will be critical if the National Grid ESO is going to meet its 2025 target of operating at zero emissions whenever there is enough renewable generation available. Kelly’s idea is to use machine learning to improve what is known as solar “nowcasting”—predicting solar electricity generation less than a few hours in advance...”

Fossil Fuels, Climate Change and India’s COVID-19 Crisis. Here’s an excerpt from an analysis at TIME.com: “…There’s been some research on air pollution and COVID-19 in India specifically, but it’s probably first worth looking at the bigger picture. A slew of studies have shown direct links between exposure to air pollution and vulnerability to COVID-19. One paper published in December in the journal Cardiovascular Research found that chronic exposure to particulate matter—a type of pollution that results from a mix of chemicals that come from sources like smokestacks and fires—is likely linked to some 15% of global COVID-19 deaths. Particulate matter doesn’t just come from fossil fuels, but the study’s authors found that more than 50% of air pollution-linked COVID-19 deaths are specifically connected to fossil-fuel use...”

The Young People Taking Their Countries to Court over Climate Inaction. The Guardian reports: “…After we announced that we were six youths from Portugal who were suing 33 countries for not doing enough to reduce emissions and fight climate change, the response was bigger than anything I had imagined. Media called from around the world. And it made me so happy and hopeful. I’ve been worried about climate change for a long time. When I was 11 years old, my younger brother André, who is also one of the young people in this case, had a terrible asthma crisis. The weather was hot and dry, and he was suffocating. Here in Portugal the effects of climate change are increasingly visible: heatwaves that cause water shortages and affect food production, and violent wildfires that give us anxiety…”

Climate Change May Have Pushed Ancient Humans Into Extinction. Here’s an excerpt from Now, Powered by Northrop Grumman: “Throughout Earth’s history, climate change has pushed animal and plant species into extinction. About 250 million years ago, global warming triggered by massive volcanic eruptions wiped out 96 percent of all marine species during the Permian period, as Science magazine details. Now, some researchers think climate change did the same to ancient humans. A research team led by Pasquale Raia of the University of Naples Federico II in Italy cross-referenced nearly 3,000 archaeological records of human species with temperature, rainfall and other weather data over the past 5 million years. Their findings, published in One Earth, suggest that global cooling episodes influenced human evolution, driving three of modern human’s cousins to extinction…”