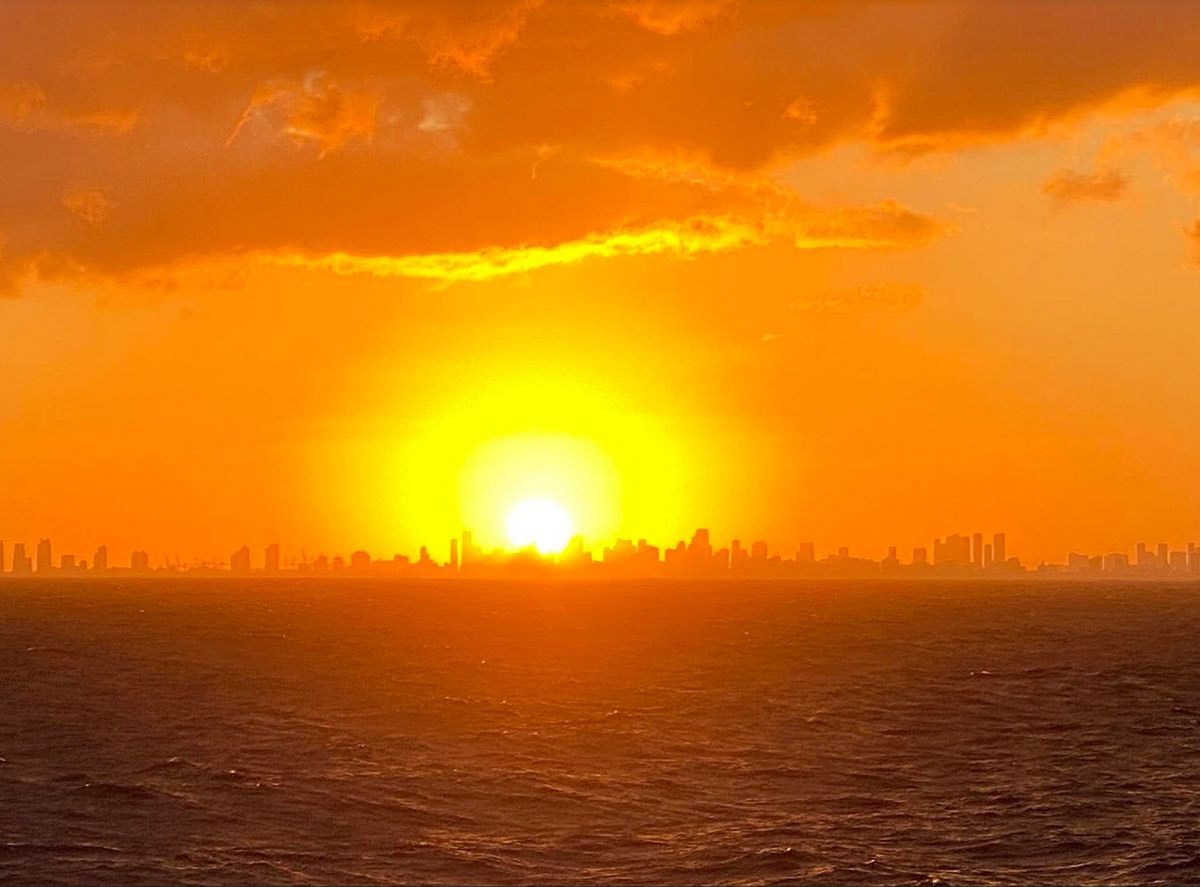 Warm Bias Next Week. NOAA’s climate models continue to show warmer than average temperatures next week from the west coast into the northern tier of the U.S.

Medium Rare. That goes for northern tier states with 80s and 90s in mid-June. The southern two thirds of America will be well done within 2 week with 90s and 100s.

Estimating the Number of Excess Heat Deaths Attributable to Heat. Environmental Epidemiology has some jaw-dropping results from a 2020 study: “…We replicated the approach from a large, international study to estimate temperature-mortality associations in 297 United States counties and additionally calculated the number of deaths attributable to heat, a quantity of likely interest to policymakers and the public…Across 297 counties representing 61.9% of the United States population in 2000, we estimate that an average of 5,608 (95% empirical confidence interval = 4,748, 6,291) deaths were attributable to heat annually, 1997–2006…”

How Severe is the Western Drought? See For Yourself. The New York Times (paywall) has perspective on an unusually severe drought over the western third of the USA in 2021; here’s an excerpt: “An intense drought is gripping the American West. Extreme conditions are more widespread than at any point in at least 20 years, according to the U.S. Drought Monitor, the government’s official drought-tracking service. And the hottest months of summer are still to come. “It’s an alarming picture,” said Daniel Swain, a climate scientist at the University of California, Los Angeles, who studies how global warming affects extreme weather events…”

The West is the Driest It’s Been in 1,200 Years – Raising Questions About a Livable Future. Yahoo News has the post; here’s a clip: “…Insufficient monsoon rains last summer and low snowpacks over the winter left states like Arizona, Utah and Nevada without the typical amount of water they need, and forecasts for the rainy summer season don’t show promise. This year’s aridity is happening against the backdrop of a 20-year-long drought. The past two decades have been the driest or the second driest in the last 1,200 years in the West, posing existential questions about how to secure a livable future in the region. It’s time to ask, “Is this a drought, or is it just the way the hydrology of the Colorado River is going to be?” said John Entsminger, the general manager of the Southern Nevada Water Authority...”

What’s New in Hurricane Forecasting? A story at Keys Weekly caught my eye; here’s an excerpt: “…As for storm modeling, Rizzo said there’s been some improvements this year between upgrades to the global forecasting system and more layers of improved physics for data collection. “This allows for improved hurricane formation forecasting with longer lead times to see systems further in advance,” he said. “We also have faster computers that can run more complex forecast models, which would lead to improved forecasts of developing hurricanes.” Residents are often frustrated by the overwhelming differences among the so-called “spaghetti plots” that show colorful, wavy lines of various storm track predictions. Forecast models include the American, European and Canadian models, among others. Rizzo emphasizes that the National Weather Service takes all models into account when making predictions — unlike many locals who fiercely pin their hopes on whichever line is farthest from their home...”

Scientists Expose the Cold Heart of Landfalling Hurricanes. Why do some ex-hurricanes magically intensify once inland? Here’s an excerpt of a good explainer at ScienceDaily: “…Now, a recent study in Physical Review Fluids has used simulations to explore the fate of landfalling hurricanes. The scientists found that after landfall, the warm, dynamic heart of a hurricane is replaced by a growing cold core — an unexpected finding that could help forecasters predict the level of extreme weather that communities farther inland may face. “Generally, if a hurricane hits land, it weakens and dies,” said Professor Pinaki Chakraborty, senior author and head of the Fluid Mechanics Unit at the Okinawa Institute of Science and Technology Graduate University (OIST). “But sometimes, a hurricane can intensify again deep inland, creating a lot of destruction, like flooding, in communities far away from the coast. So, predicting the course that a hurricane will take is crucial…”

Tiny Satellites Could Help Warn of the Next Big Hurricane. Timing is everything. WIRED.com explains: “…Polar orbiters circle Earth from north to south, taking imagery from all longitudes as the planet rotates. They orbit much lower than their geostationary counterparts, at about 512 miles (2.7 million feet) above the surface. This allows them to gather data in the microwave range, providing a picture of what’s going on within a storm. But it takes them 12 hours to complete a full trip around the globe, so by the time forecasters get a second look at a particular storm, what started as a tropical depression over the mid-Atlantic may have progressed to a tropical storm as it nears the Caribbean. That creates a slowdown at a crucial time, because every data point a forecaster has could be a critical piece of the puzzle, allowing them to put together a more accurate picture of the approaching storm…”

How to Survive the Worst Tornado in US History. The author of a story at WIRED.com tees up situational awareness and the best course of action among a variety of bad options in the deadly 1925 Tri-State Tornado. Here’s an excerpt: “…Humans are almost uniquely ill-suited to move into the wind. Evolution has finely tuned the human body into a near-perfect pendulum. Our weight is aligned over our hips, so that we can gently tip over, catch our fall, and repeat the process–aka walk–in a remarkably efficient way. Headwinds ruin all of that. Our broad, flat, rectangular chests turn into sails. In 70 mph winds, you’ll need to lean forward 15 degrees just to stand upright. Running into them will be like sprinting up a 25-degree slope. You’ll watch as dogs, deer, and most of the ambulatory animal kingdom use their sleek, aerodynamic bodies to cut through the wind, while you’ll likely end up hanging onto a lamppost and cursing your sail of a chest…”

Nobody Knows Exactly How Tornadoes Form – And the Mystery Can be Deadly. Are warnings getting better over time? An analysis at Vox has some interesting data: “…This is one of the most frustrating, stagnant problems in meteorology. As of 2011, the average lead time for tornado warnings was just around 13 minutes. But as the Washington Post has reported, lead times have been getting worse in recent years, dropping to 8.4 minutes between 2012 and 2020. Some people have even less warning. (Odhwani says he didn’t hear the city’s warning sirens, and might have kept sleeping if his phone wasn’t nearby.) Think about it: If you had less than a quarter of an hour to prepare for devastation, what could you accomplish? The truth is that those minutes of warning actually represent an improvement…”

Northwest “Heat Dome” Shows How Climate Change is Causing Unprecedented Events. Axios explains the implications of what we’re seeing with greater frequency: “The dangerous heat wave enveloping the Pacific Northwest is shattering weather records by such large margins that it is making even climate scientists uneasy.

Why it matters: Infrastructure, including heating and cooling, is built according to expectations of a “normal” climate. Human-caused climate change is quickly redefining that normal, while dramatically raising the likelihood of events that simply have no precedent.

Earth is Trapping “Unprecedented” Amount of Heat, NASA Says. Details via The Guardian: “The Earth is trapping nearly twice as much heat as it did in 2005, according to new research, described as an “unprecedented” increase amid the climate crisis. Scientists from NASA, the US space agency, and the National Oceanic and Atmospheric Administration (NOAA), reported in a new study that Earth’s “energy imbalance approximately doubled” from 2005 to 2019. The increase was described as “alarming”. “Energy imbalance” refers to the difference between how much of the Sun’s “radiative energy” is absorbed by Earth’s atmosphere and surface, compared to how much “thermal infrared radiation” bounces back into space…”

Should Solar Engineering Be Considered in the Fight Against Climate Change? The National Academies weighs in – here’s an excerpt: “…Field and McNutt cited concerns about the possibility of detrimental physical and social consequences from solar geoengineering, including intensification of drought, threats to national security, and challenges related to issues of environmental justice and equity. “Solar geoengineering is not a comprehensive solution,” said Field. He stressed that there are many aspects of climate change that the approach does not address, including ocean acidification. The effects of solar geoengineering on weather patterns and stratospheric ozone have not been adequately explored, he said. “Those are important enough that we wouldn’t even be close to arguing for deployment until we learn a lot more.” “Once you already get to the point where it’s too difficult to adapt, and you haven’t mitigated, and the situation is so bad, what can you do to try to lessen how bad it is, by some sort of band aid?” One possible band aid is solar geoengineering, McNutt said…”

Climate Change is Impacting Retirement Plans. How Retirees are Adapting. CNBC.com has the post; here’s the intro: “The threat of climate change is shifting some older Americans’ retirement plans. Extreme weather such as hurricanes, flooding, freezing temperatures and wildfires has prompted some to rethink where they will spend their golden years. “Clients are seeing it for themselves and starting to adjust plans as a result,” said John McGlothlin III, a certified financial planner with Southwest Retirement Consultants in Austin, Texas. One client, planning to retire in Galveston, Texas, wasn’t prepared for the rising expense of flood insurance, he said. While the average cost for Texas flood coverage is $700 per year, premiums may be higher in some areas…”

A $26 Billion Plan to Save the Houston Area from Rising Seas. WIRED.com (paywall) has the post; here’s an excerpt: “…In 2014, the US Army Corps of Engineers partnered with the state to study Ike Dike-like alternatives for Galveston Bay. After many iterations, bills to establish a governing structure for the $26.2 billion barrier proposal, which the Corps developed alongside the Texas General Land Office, recently passed both the Texas House and Senate. In September, the Corps will deliver their recommendations to the US Congress, which will need to approve funding for the project. No one can guess the barrier proposal’s exact fate, given its enormous price tag. And as sea levels rise and storms intensify with global climate change, Houston is far from the only US coastal metropolitan region at serious risk. Multibillion-dollar coastal megaprojects already are underway or under consideration from San Francisco to Miami to New York City...”

Palm Beach Billionaire’s Build Bigger Beach Homes to Prevent Sinking. Rising seas? That’s for the next sucker to worry about! Bloomberg has the story: “…The town of Palm Beach is busy adapting to the risks of a warming planet, even if there appear to be fewer worriers among the buyers and speculative builders on the island. Some of the lowest-lying properties in the U.S. are seeing the highest-flying prices. The real estate website Zillow estimates the value of Peterffy’s home at $52 million. This year a new nine-bedroom mansion with toes-in-the-sand views sold to financier Scott Shleifer for a record-breaking price in excess of $122 million. Waterfront real estate prices are rising across the U.S. in a frenzied pandemic-tinged market. During the first quarter of this year homes at high risk of flooding sold for a record 13.6% premium over less risky homes, according to brokerage Redfin...”