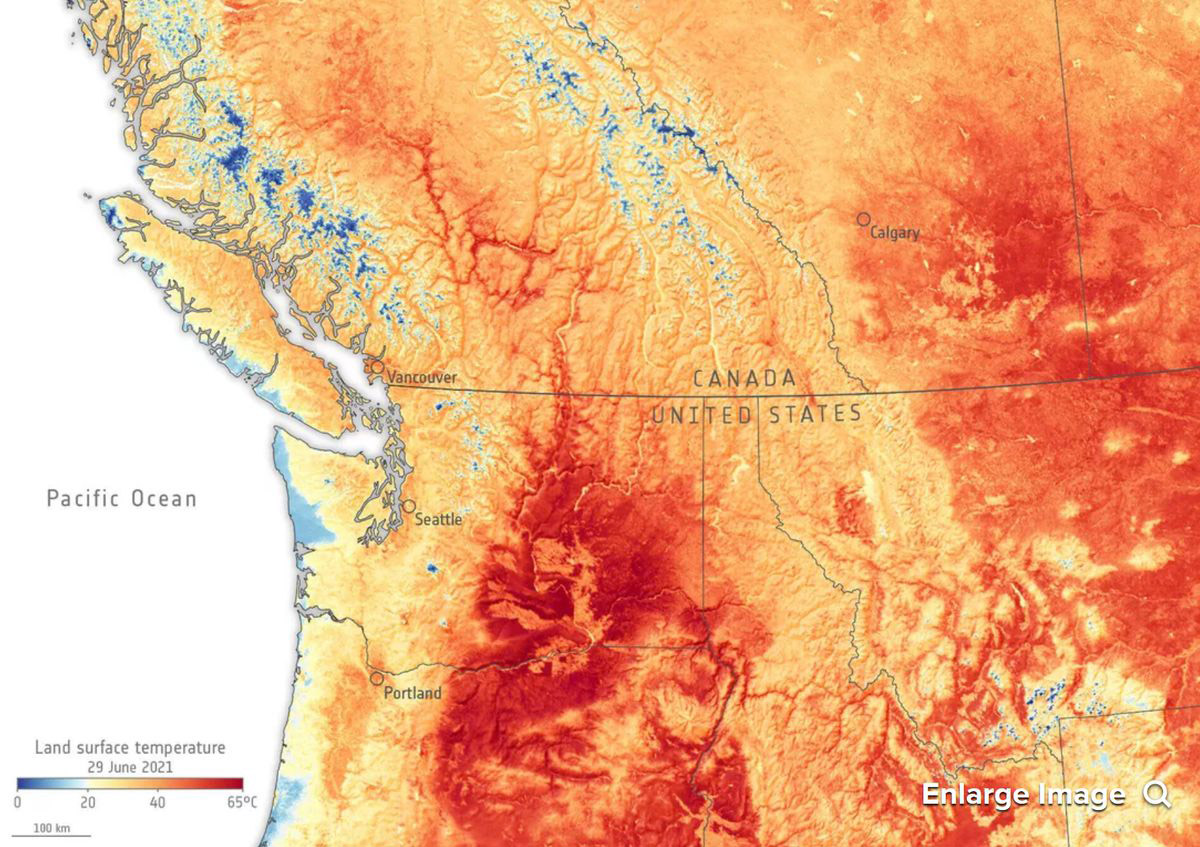 The forecast can always be more accurate. The words we choose to communicate weather can always provide more clarity. Story-telling 101. Two reasons meteorologists get fired up every day. That, and every day is different. Patterns may be similar, but never identical.

Another challenge: there are 803 cities and smaller towns in Minnesota. All weather, like politics, is local. The forecast for Willmar is (slightly) different than Litchfield. Media outlets focus on major population centers, providing the macro view. Phone apps and web sites offer a micro forecast of localized weather for specific zip codes.

Time For Another Hot Spike? The GFS preview of what to expect 2 weeks out looks torch-like for much of America especially southern and western USA, with a few more waves of 90s lapping into the Upper Midwest the last week or 2 of July. It’s worth repeating: July is the hottest month of the year, on average.

A Cirrus Sign of Tornadoes. I learned something today, courtesy of NASA’s Earth Observatory; here’s an excerpt: “…“Notice the plumes of warm air downwind of updrafts—the cold overshooting cloud tops,” said Kristopher Bedka of NASA’s Langley Research Center. “Those are what we call ‘above-anvil cirrus plumes’ (AACPs)—cirrus clouds that were injected into the stratosphere.” Most thunderstorms can grow up to the tropopause, the boundary between the troposphere and the stratosphere. When strong storms reach the tropopause, their tops flatten out, giving them an anvil-like appearance. Above-anvil cirrus plumes form when especially intense updrafts puncture the tropopause and airflow draws cirrus cloud tops into the stratosphere. Cirrus plumes are typically warmer than underlying anvil clouds because the air temperature in the stratosphere increases with altitude...”

Heat Waves Kill People, and Climate Change is Making It Much, Much Worse. National Geographic has the story; here’s a clip: “…A mountain of scientific research has shown that climate change is making heat waves longer, hotter, more likely, and more dangerous. A recent study published in Nature Climate Change adds additional detail by assessing the human cost of that extra heat: In June, a team of some 70 researchers reported that for the 732 sites on 6 continents they studied, on average, 37 percent of all heat-related deaths can be pinned directly on climate change. The study underscores the urgency with which we need to address human-caused climate change, says Ana Vicedo Cabrera, lead author of the study and a climate change epidemiologist at the University of Bern, in Switzerland…”

27 Ways a Heat Wave Can Kill You. Here’s an excerpt of new research at Circulation: Cardiovascular Quality and Outcomes: “Heat waves, sporadic events of extreme heat, pose a threat to human life. Deaths in excess of 70 000 people during the 2003 European heat wave, 10 000 people during the 2010 Russian heat wave, and high death tolls from numerous other heat waves1 are staggering demonstrations that extreme climatic conditions are already exceeding human thermoregulatory capacity. The area of the planet experiencing heat wave conditions similar to those that have killed people is expanding and is currently inhabited by ≈30% of the world’s human population.1 Because the planet will warm another 1°C by 2100 if we curtail greenhouse gases or 3.7°C if we do not, our choices for deadly heat are now between more of it or a lot more of it…”

Canadian Inferno: Northern Heat Exceeds Worst-Case Climate Models. The Guardian puts last week’s jaw-dropping heat into perspective: “…Carlo Buontempo, director of the Copernicus Climate Change Service, said there was a clear human fingerprint on this “very freakish” event. Without emissions from cars, farms and industry, he said, the record temperatures in the western north Americas would be expected only once in tens of thousands of years, but the probability rises along with the levels of the greenhouse gas. “In the present-day climate, getting an extremely hot June is common and is likely to occur twice in three decades. However, an analysis from many computer models suggests that by the end of the century these extreme temperatures are more likely than not. Human influence is estimated to have increased the likelihood of a new record several thousand times.”

The Miami Building Collapse and Humanity’s Tragic Fight for the Future. WIRED.com asks the rhetorical question: is it too late on climate? I suspect the answer is no, at least the ability to avoid a worst case (RCP8.5) scenario: “…And here’s the part of all this that’ll make you cry: If a collapsing building that kills dozens of people is both warning and crisis—which is to say, too late to save anyone—so too are those wildfires and heat domes. Carbon dioxide persists in the atmosphere for centuries; climate change doesn’t manifest itself as disasters until it’s nearly too late to fix. And even those disastrous events somehow fail to focus us. Maybe this week’s extraordinary temperatures in the Pacific Northwest will shake policymakers loose from their lethargy. But why would they? Superstorms and hurricanes like Katrina and Sandy didn’t do it. The wildfires of 2020 didn’t do it. Seasonal flooding in Miami hasn’t done it. All those events and more were signals not of a system on the brink, but of one that’s already broken…”