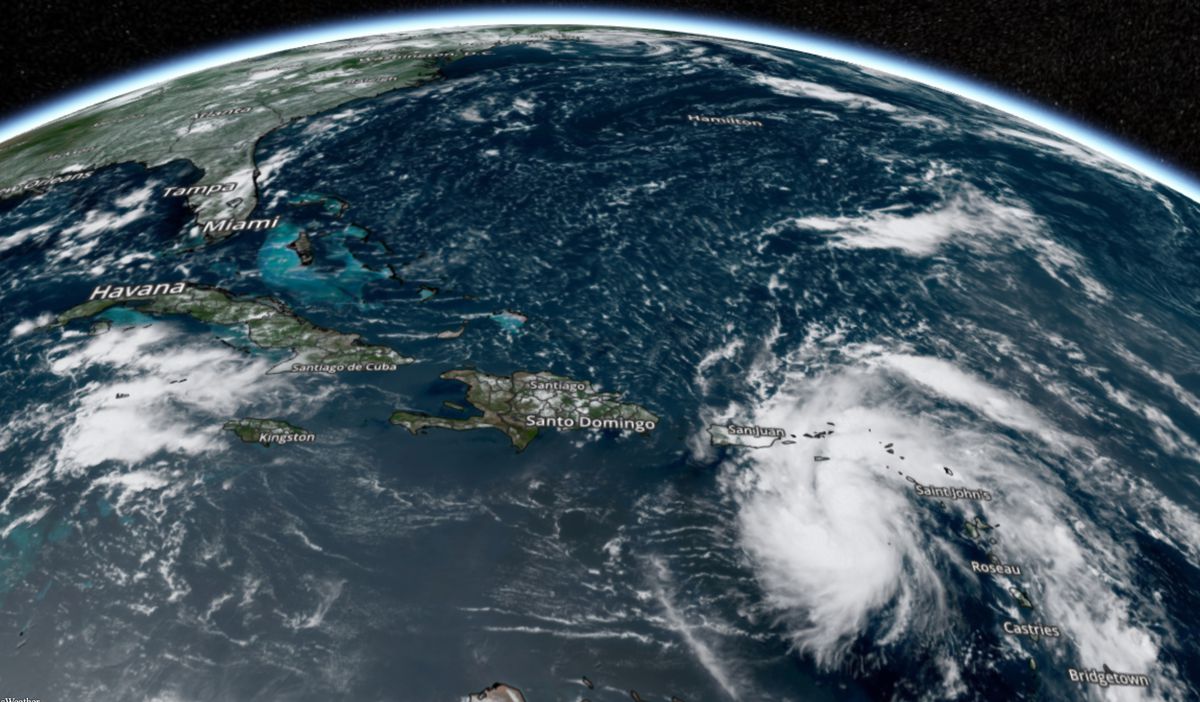 Every IPCC climate report becomes a little more dire with time as scientists draw a straight line from a doubling of planet-warming greenhouse gases since 1850 to an increase in weather extremes.

During a WCCO Radio interview Tuesday, St. Thomas climate scientist John Abraham reacted to the report. “It’s unequivocal, humans are causing the warming. We are now seeing the impact on our weather. It is too late to avoid climate change, but what we’re trying to do now is avoid the worst of climate change” he said. The uptick in weather disasters is taking place with 2F of warming. We’re trying to avoid 3 to 5F of warming.

PS: Abraham ended his talk on a hopeful note. “We now have technology available today that can make this world better, reduce greenhouse gas emissions and save money.”

All true. Now we just have to move faster.

Seasonably Warm in Late August. That’s what GFS is implying, dribbling a few (weak) cool fronts into the northern tier of the USA, keeping the core of the heat over the southern half of the nation.

Tracking Fred? NOAA’s National Hurricane Center brings a tropical depression into Hispaniola, strengthening back to tropical storm strength off the north coast of Cuba before tracking up the western (Gulf) coast of Florida over the weekend. The intermission from tropical weather was nice – here comes prime time.

Historically Red-lined Neighborhoods are Warmer Than Others in the Twin Cities. The impact of the urban heat island is greatest in urban areas least able to cope with an extra 5-10 degrees on sweltering summer days (and nights). Sahan Journal has the post; here’s an excerpt: “…In a St. Louis Park parking lot, the temperature above a bed of asphalt outside a big box store reached 94 degrees in the mid-afternoon Aug. 3. A few miles west, on a tree-lined sidewalk in south Minneapolis’ East Isles neighborhood, it was 82 degrees. On the southeast side of downtown Minneapolis, amid the concrete streets and large buildings of the Elliot Park neighborhood, temperatures averaged around 90 degrees, cooling to 85 degrees in the shade of a local park. The wide range of measurements, taken by Sahan Journal in the span of a few hours, exemplify what’s known as the urban heat island effect. It’s a phenomenon in which urban centers with a lack of vegetation average higher temperatures than surrounding areas with more trees and plants. But even within cities, the differences between green areas and those built of concrete is stark. And, since wealthier neighborhoods tend to be greener than poorer ones, the heat island effect disproportionately impacts low-income people and people of color...”

5G Wireless Could Interfere with Weather Forecasts. Scientific American explains: “Federal agencies are competing with one another over radio waves used to help predict changes in the climate as the sky is increasingly cluttered with noise from billions of smartphones. On one side are NOAA and NASA. They have developed space satellites that passively capture and decode the faint energy signals given off by changes in water vapor, temperatures, rain and wind that determine future weather patterns. They are supported by weather and earth scientists who say the signals are threatened by 5G, the emerging “fifth generation” of wireless communication devices that could create enough electronic noise on radio spectrums to reduce forecasting skills and distort computer models needed to predict the progress of climate change...”

Blackouts and Power Interruptions Linked to Extreme Weather Are On the Rise. Here’s the intro to a report at Nature World News: “According to a recent study, blackouts caused by extreme weather have more than quadrupled in the previous six years, with the number of blackouts in the Pacific Northwest this summer serving as an example. Brian Stone, a professor at Georgia Institute of Technology, stated that the study’s team of researchers could model how a heat wave in Atlanta, Detroit, and Phoenix would affect temperatures both inside and outside structures. They discovered that the number of blackout occurrences lasting at least one hour and affecting at least 50,000 utility customers in the United States rose by more than 60% during the preceding five-year reporting period...”

Extreme Weather Events May Share the Same Mechanism. Earth.com reports; here’s an excerpt: “Record-breaking weather events, both hot and cold, may actually share the same underlying mechanism. An international research team has looked into three extreme events from the past winter to identify the forces that are driving such swings in the weather. “By studying these record-breaking cold spells, we can see the ’big picture‘ of extreme weather events.” said study co-author Zhe Han, a scientist in the Institute of Atmospheric Physics at the Chinese Academy of Sciences. “Though the events can be different, they might share similar underlying mechanisms that are related to the global warming. Along with the warming, the Arctic amplification and intensified ocean thermal anomalies may interact with the atmospheric circulation, such as the polar vortex and sudden stratospheric warming, to cause the occurrence of extreme cold or hot events…”

8 Strange Cloud Types and What They Mean. Mental Floss has a great overview; here’s an excerpt focused on fallstreak clouds: “…The reason a fallstreak hole is sometimes called a “hole punch cloud” doesn’t need much clarification: It looks like someone used a massive hole-puncher on a cloud. In order to create one, you first need a layer of cirrocumulus (high-altitude) or altocumulus (medium-altitude) clouds that contain “supercooled” droplets. Though these droplets are at below-freezing temperatures, the lack of anything solid for them to form ice around keeps them in a liquid state. When something solid is introduced—often ice crystals that fall from an airplane flying overhead—all the supercooled droplets around it freeze and fall, leaving a hole in their wake…”

“Code Red”: UN Scientists Warn of Worsening Global Warming. Here’s an excerpt of a good summary of IPCC AR6 from Associated Press: “Earth is getting so hot that temperatures in about a decade will probably blow past a level of warming that world leaders have sought to prevent, according to a report released Monday that the United Nations called a “code red for humanity.” “It’s just guaranteed that it’s going to get worse,” said report co-author Linda Mearns, a senior climate scientist at the U.S. National Center for Atmospheric Research. “Nowhere to run, nowhere to hide.” But scientists also eased back a bit on the likelihood of the absolute worst climate catastrophes. The authoritative Intergovernmental Panel on Climate Change (IPCC) report, which calls climate change clearly human-caused and “unequivocal” and “an established fact,” makes more precise and warmer forecasts for the 21st century than it did last time it was issued in 2013...”

Key Take-Aways from the New IPCC Report. Bob Henson reports for Yale Climate Connections: “…As long expected, rising global temperatures are continuing to boost the odds of intense, prolonged heat waves. Moreover, the global water cycle continues to intensify, with the heaviest downpours getting heavier and the worst droughts having even more impact on parched landscapes. This assessment marks a new focus on the pile-on effects delivered by compounded extremes. Although the warming estimates from IPCC haven’t skyrocketed in this new report, there’s new recognition of how global-scale warming can translate into devilishly complex and destructive local and regional impacts. “These compound events can often impact ecosystems and societies more strongly than when such events occur in isolation,” IPCC noted in an FAQ it prepared for the new assessment. “For example, a drought along with extreme heat will increase the risk of wildfires and agriculture damages or losses...”

Key Take-Aways from the IPCC Report on the Climate Crisis. CNN.com has more perspective: “…Heat waves – Extreme heat waves, such as the deadly one that occurred in the Pacific Northwest and Canada earlier this summer, are already about five times more likely to occur with our current warming of just over 1 degree Celsius. At 2 degrees warming, this frequency increases to 14 times as likely to occur. Heat waves are getting hotter, and with 2 degrees of warming, the hottest temperatures would reach nearly 3 degrees Celsius (5 degrees Fahrenheit) higher than previous heat waves.

Droughts – Climate change is increasing the frequency and severity of droughts – such as the current drought plaguing the Western United States. Severe droughts that used to occur an average of once per decade are now occurring about 70% more frequently. If warming continues to 2 degrees, these droughts will occur between two and three times as often.

Flooding – Climate change is intensifying the water cycle on both sides. While more intense evaporation will lead to more droughts, warmer air can hold more water vapor to produce extreme rainfall (as we have seen play out dramatically in Western Europe and China this summer). On average, the frequency of heavy downpours has already increased by about 30% and they contain about 7% more water…”

The UN Report: All Is Not Well – But All Is Not Lost. WIRED.com (paywall) weighs in; here’s a clip: “…We’ve known for decades that the world is warming, but this report tells us that recent changes in the climate are widespread, rapid, and intensifying—unprecedented in thousands of years,” said Ko Barrett, IPCC vice chair and senior adviser for climate at the National Oceanic and Atmospheric Administration, at a press conference Sunday announcing the report. “The bottom line is that unless there are immediate, rapid, and large-scale reductions in greenhouse gas emissions, limiting warming to 1.5 degrees C—or 2.7 degrees Fahrenheit—will be beyond reach.” That limit is the optimistic goal of the Paris Climate Agreement: to keep global average temperatures to 1.5 degrees Celsius above preindustrial levels, and to avoid 2 degrees of warming. The new report notes that the temperature has already crept up by 1.1 degrees, and is on track to hit 1.5 sometime in the early- to mid-2030s if things don’t change...”

Uptick in Flooding is Extreme, Global and Linked to Continued Warming. I wrote a post for AerisWeather, here’s an excerpt: “…What is happening? As a meteorologist at AerisWeather, I’ve been tracking the link between a rapidly warming climate and weather extremes. Weather and climate are flip sides of the same coin. Warm the climate and the symptoms will show up in the weather. The emerging science of “attribution” links extreme weather events with warmer air and water. But two major factors seem to be in play. The world has warmed an average of 2F; but much more over northern latitudes. Basic physics: warmer air can hold more water vapor, more fuel for storms to tap. There is roughly 8% more water vapor overhead than there was in the 19th century. Rain is falling harder and faster and longer, with often dire results. This summer, flash flooding has struck numerous US cities, including New York, Detroit, Chicago and New Orleans, on track to experience its wettest year on record…”