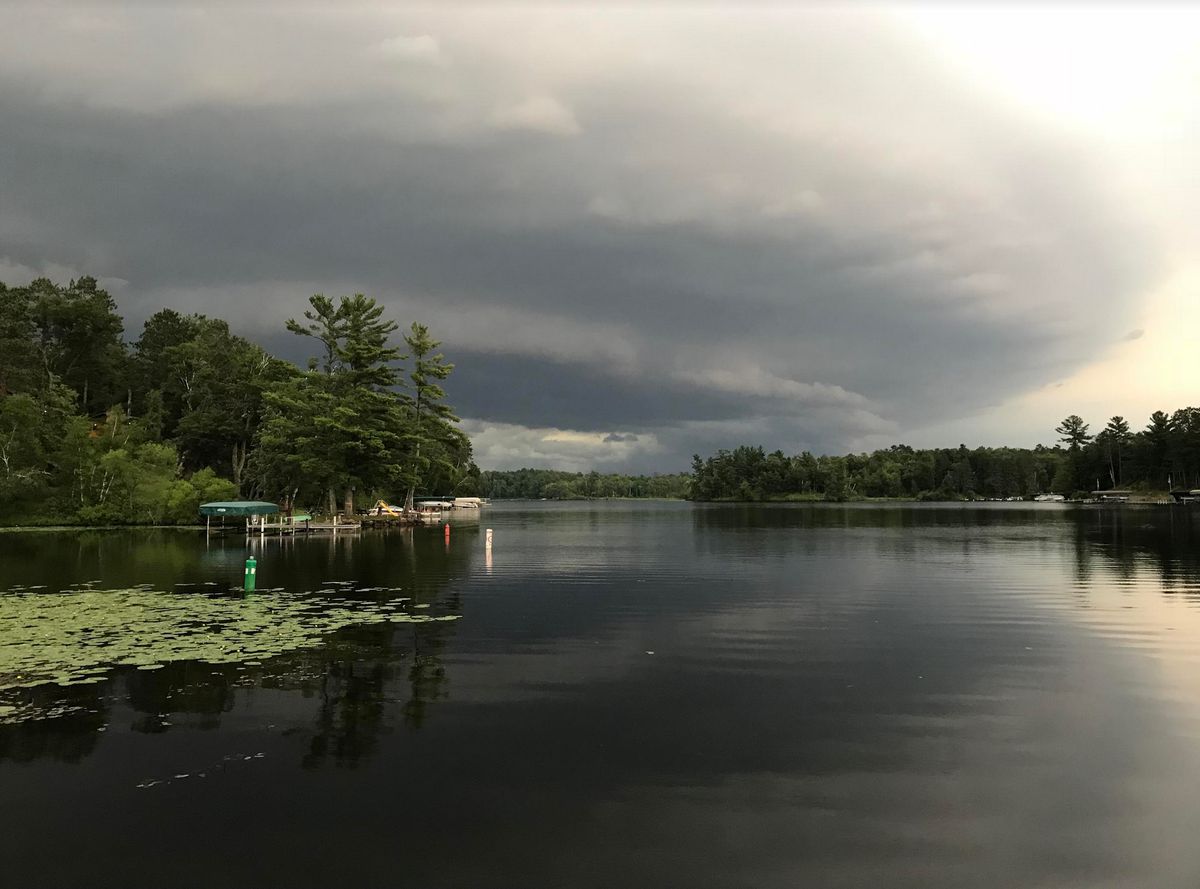 Maps Still Don’t Look Like Late October. NOAA’s GFS model roughly 2 weeks out shows a massive ridge of high pressure over the western US and much of western Canada, which suggests another warming trend by the third of fourth week of October. At this rate I wouldn’t be shocked to see a few more 70s within 2 weeks or so.

World Meteorological Organization Sharpens Warnings About Both Too Much and Too Little Water. Inside Climate News reports: “The global supply of fresh water is dropping by almost half an inch annually, the World Meteorological Organization warned in a report released this week. By 2050, about 5 billion people will have inadequate access to water at least one month per year, the report said. Overall, global warming is intensifying the planet’s water cycle, with an increase of 134 percent in flood-related disasters since 2000, while the number and duration of droughts has grown by 29 percent over the same period. Most of the deaths and economic losses from floods are in Asia, while Africa is hardest hit by drought. “The water is draining out of the tub in some places, while it’s overflowing in others,” said Maxx Dilley, director of the WMO Climate Programme. “We’ve known about this for a long time. When scientists were starting to get a handle on what climate change was going to mean, an acceleration of the hydrological cycle was one of the things that was considered likely...”

The Grid Isn’t Ready for the Renewable Revolution. WIRED.com (paywall) has the story; here’s an excerpt: “…Utilities have sophisticated systems for predicting when demand will go up and down, so on most days this isn’t a problem. They can buy extra power from neighboring utilities if need be. Or, they can strike that balance by burning more fossil fuels—but that, of course, spews more carbon. But if there’s an unexpected spike in demand and a utility doesn’t have the requisite power, it has to restore balance by cutting demand—with blackouts. As renewable sources take over the energy mix, utilities won’t be able to quickly spin up more supply by burning fossil fuels. So a future grid that runs on an often intermittent supply of energy from renewables will need to be far more flexible to compensate…”

Drought is Causing U.S. Hydropower to Have a Rough Year. Is This a Sign of a Long-Term Shift? More analysis from Inside Climate News: “When something reliable begins to look shaky, we should take notice. That’s what’s happening for hydroelectric power in much of the West, where severe drought has led to low water levels in the rivers and reservoirs that feed the power systems. The Energy Information Administration is projecting a 13.9 percent decrease in hydroelectric generation this year compared to 2020, part of a larger picture in which renewable energy—which includes hydropower—is not growing as fast as scientists say is necessary to avoid the worst effects of climate change. I wanted to know whether the drop in hydropower was a sign of a long-term shift that could be harmful to the transition to clean energy…”

Major Climate Action at Stake in Fight Over Twin Bills Pending in Congress. Here is an excerpt from an analysis at The New York Times (paywall): “…Mr. Biden’s plan to try to fortify the United States against extreme weather — and cut the carbon dioxide emissions that are heating the Earth and fueling disasters — is embedded in two pieces of legislation pending on Capitol Hill. The future of both bills remains in question, with tension between moderate and progressive Democrats over the size and scope of many details. Together, they contain what would be the most significant climate action ever taken by the United States. Because Democrats could lose control of Congress after 2022 and Republicans have shown little interest in climate legislation, it could be years before another opportunity arises — a delay that scientists say the planet cannot afford. The climate provisions are designed to quickly transform energy and transportation, the country’s two largest sources of greenhouse gases, from systems that now mostly burn gas, oil and coal to sectors that run increasingly on clean energy from the sun, wind and nuclear power…”

Fossil Fuel Industry Gets Subsides of $11 Million a Minute, IMF Finds. The Guardian reports: “The fossil fuel industry benefits from subsidies of $11m every minute, according to analysis by the International Monetary Fund. The IMF found the production and burning of coal, oil and gas was subsidized by $5.9tn in 2020, with not a single country pricing all its fuels sufficiently to reflect their full supply and environmental costs. Experts said the subsidies were “adding fuel to the fire” of the climate crisis, at a time when rapid reductions in carbon emissions were urgently needed. Explicit subsidies that cut fuel prices accounted for 8% of the total and tax breaks another 6%. The biggest factors were failing to make polluters pay for the deaths and poor health caused by air pollution (42%) and for the heatwaves and other impacts of global heating (29%).

Extreme Heat is One of the Deadliest Consequences of Climate Change. Here’s a clip from an analysis at The Los Angeles Times: “…Extreme heat is one of the deadliest consequences of global warming. But in a state that prides itself as a climate leader, California chronically undercounts the death toll and has failed to address the growing threat of heat-related illness and death, according to a Los Angeles Times investigation. Between 2010 and 2019, the hottest decade on record, California’s official data from death certificates attributed 599 deaths to heat exposure. But a Times analysis found that the true toll is probably six times higher. An examination of mortality data from this period shows that thousands more people died on extremely hot days than would have been typical during milder weather. All told, the analysis estimates that extreme heat caused about 3,900 deaths…”

Increasing Heat and Rainfall Extremes Now Far Outside the Historical Climate. Here’s a summary of new research at NPJ Climate and Atmospheric Science: “Over the last decade, the world warmed by 0.25 °C, in-line with the roughly linear trend since the 1970s. Here we present updated analyses showing that this seemingly small shift has led to the emergence of heat extremes that would be virtually impossible without anthropogenic global warming. Also, record rainfall extremes have continued to increase worldwide and, on average, 1 in 4 rainfall records in the last decade can be attributed to climate change. Tropical regions, comprised of vulnerable countries that typically contributed least to anthropogenic climate change, continue to see the strongest increase in extremes…”

6 Aspects of American Life Threatened by Climate Change. The New York Times (paywall) has perspective: “Less food. More traffic accidents. Extreme weather hitting nuclear waste sites. Migrants rushing toward the United States, fleeing even worse calamity in their own countries. Those scenarios, once the stuff of dystopian fiction, are now driving American policymaking. Under orders from President Biden, top officials at every government agency have spent months considering the top climate threats their agencies face, and how to cope with them. On Thursday, the White House offered a first look at the results, releasing the climate-adaptation plans of 23 agencies, including the departments of Energy, Defense, Agriculture, Homeland Security, Transportation and Commerce. The plans reveal the dangers posed by a warming planet to every aspect of American life, and the difficulty of coping with those threats...”

Google, YouTube to Prohibit Ads and Monetization on Climate Denial Content. Axios explains: “Google and YouTube on Thursday announced a new policy that prohibits climate deniers from being able to monetize their content on its platforms via ads or creator payments. It’s one of the most aggressive measures any major tech platform has taken to combat climate change misinformation. Google advertisers and publishers, as well as YouTube creators, will be prohibited from making ad revenue off content that contradicts “well-established scientific consensus around the existence and causes of climate change,” the company’s ads team said in a statement. “This includes content referring to climate change as a hoax or a scam, claims denying that long-term trends show the global climate is warming, and claims denying that greenhouse gas emissions or human activity contribute to climate change…”

Climate Journalism is Coming of Age. The Nation has details: “It’s taken too long, but the mainstream media—finally and haltingly—seems to be realizing that the climate crisis is a story that can no longer be ignored. Until a couple years ago, many of the world’s most influential news organizations, especially in the United States, relegated the climate story to the fringe. What we have called “climate silence” prevailed. How far we have come. Today, it’s not unusual to see a climate story every day or two on the front page of The Washington Post or The New York Times, where Sarah Kaplan, Somini Sengupta, and Hiroko Tabuchi, among others, do exceptional reporting. TV networks, long the laggards in climate reporting, are also joining in, especially in their morning newscasts, where weather experts Al Roker at NBC, Jeff Berardelli at CBS, and Ginger Zee at ABC talk often about what they don’t hesitate to call “the climate crisis” or even “the climate emergency.” CNN, NPR, the Los Angeles Times, and other major outlets are hiring reporters, editors, producers, and more to staff new or expanding climate units…”

The (Very Slow) Race to Move Forests in Time to Save Them. WIRED.com collaborated with Mother Jones on this story – here’s an excerpt: “…The future of forests is a grim one—too grim for some of us to bear. By 2030, 75 percent of redwoods will disappear from some of their coastal California habitats. In some climate scenarios, almost none of the namesake species in Joshua Tree National Park will exist. Sea level change is creating ghost forests all along the Eastern Seaboard—­already, less than a third of New Jersey’s Atlantic white cedar habitat remains. Like humans, forests have always migrated for their survival, with new trees growing in more hospitable directions and older trees dying where they are no longer best suited to live. The problem now is that they simply can’t move fast enough. The average forest migrates at a rate of roughly 1,640 feet each year, but to outrun climate change, it must move approximately 9,800 to 16,000 feet—up to 10 times as fast...”