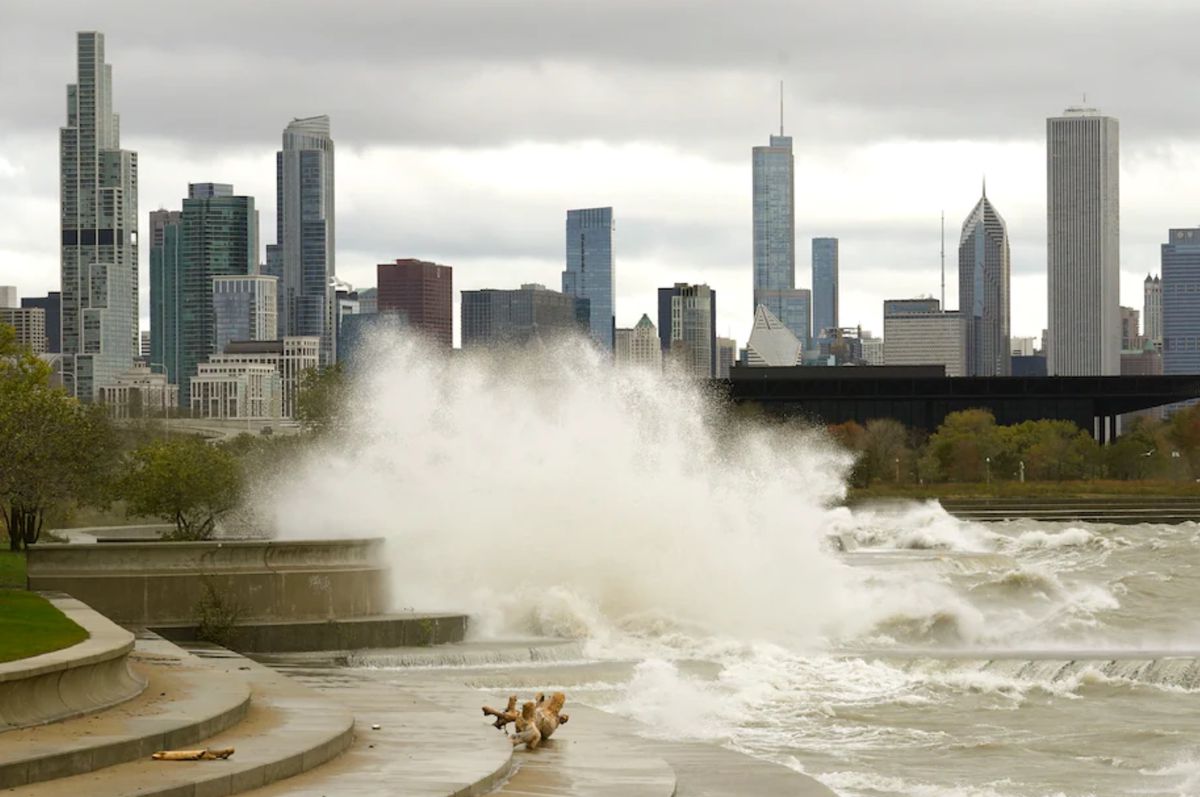 Slushy Coating Possible Friday. With temperatures above freezing and a little rain mixing in with wind-whipped snow, I’m not terribly excited about accumulating snow in the MSP metro, although healthy amounts of slush are likely over far northern and western Minnesota.

“Backlash”. Meteorologists love to make up words and phrases that attempt to describe what’s going on – moisture rotating all the way around a strong storm will approach from the north and northwest later today into Friday, with temperatures cold enough for light snow across most of the state – although a little rain may mix in from MSP south and east.

Potential For Milder Than Average Thanksgiving. So you’re telling me there’s a chance…? If you believe GFS looking out nearly 2 weeks, 500mb winds show a mild, Pacific influence across most of the USA (with the exception of the Pacific Northwest). If this comes close to verifying temperatures should be considerably milder than average on Thanksgiving Day.

Polluted Waters in Minnesota: 305 More Lakes, Streams Added to List. Patch.com has an update on our greatest natural resource: “…Minnesota’s water is its most valuable resource and everyone expects our lakes and streams to be suitable for swimming and fishing,” said Katrina Kessler, MPCA commissioner, in a news release. “While Minnesota has made progress in cleaning up waters, too many of our lakes and streams are in still trouble, from high levels of phosphorus that grow algae to PFAS contamination in our waters in Greater Minnesota. We still have more work to do.” Bacteria, sediment, nutrients, and poor conditions for fish are among the most common impairments in Minnesota waters, according to officials…”

Axios has more perspective on the state of Minnesota’s lakes and rivers here.

The Edmond Fitzgerald Began Its Tragic Journey 46 Years Ago Today. It probably sank on November 10, 1975, according to a post at mlive.com: “…It was 46 years ago today that the Edmund Fitzgerald was being loaded with 26,000 tons of iron ore, prepped for what would become her doomed final voyage. Once the largest ship on the Great Lakes, the 728-foot Fitzgerald left Superior, Wisconsin at 2:15 p.m. on Nov. 9, 1975. Her crew planned to cross Lake Superior to deliver the load at Detroit’s Zug Island. But a day later, she was gone, broken in two and lying on the lake’s bottom in 530 feet of water, all 29 souls aboard lost. Gordon Lightfoot’s poignant song “The Wreck of the Edmund Fitzgerald” helps keep alive the memory of what’s become the Great Lakes’ most famous shipwreck. But her captain and crew were also sons, brothers, husbands and fathers. They hailed from Michigan, Ohio, Wisconsin, Minnesota and beyond…”

Draft Deal Looks Beyond UN Conference for Real Climate Advances. Reuters has the latest on COP26: “The British hosts of the U.N. climate conference have called on countries to raise their ambitions to cut greenhouse gas emissions by next year, acknowledging that current pledges fall short of what is needed to avert climate catastrophe. The first draft of the conference conclusion, which must now be negotiated by the almost 200 countries present in Glasgow and agreed by the close of the two-week talks on Friday, was released early on Wednesday. It asks countries to “revisit and strengthen the 2030 targets in their nationally determined contributions, as necessary to align with the Paris Agreement temperature goal by the end of 2022…”

The Draft COP26 Decision is here.

World on Track for 2.4C Warming, Even With Latest COP26 Pledges, Climate Action Tracker Finds. CNN.com has the latest on COP26: “The world is on track for 2.4 degrees Celsius of warming above pre-industrial levels, if not more, according to a new analysis — despite countries’ new and updated climate pledges, including those made at the COP26 summit in Glasgow, Scotland. The watchdog Climate Action Tracker (CAT) warned on Tuesday that global greenhouse gas emissions in 2030 will still be roughly twice as high as what’s necessary to limit warming to 1.5 degrees — a threshold scientists have said the planet should stay under to avoid the worst consequences of the climate crisis. The net-zero goals of 40 countries account for 85% of global emissions cuts, but the group found only 6% of those emissions were backed up by concrete plans...”

Analysis: Do COP26 Promises Keep Global Warming Below 2C? Some good analysis from Carbon Brief; here’s an excerpt: “…Four different groups have provided newly updated estimates of likely warming outcomes either shortly before or during COP26, with new updates coming out on a near-daily basis. These include the United Nations Environment Programme (UNEP), Climate Action Tracker (CAT), the International Energy Agency (IEA) and Climate Resource (CR), an Australia-based climate analysis group. The figure (above) shows how current policy, 2030 commitments and net-zero promises compare between groups – and how they stack up against the five different future warming scenarios featured in the recent sixth assessment report (AR6; grey bars) from the Intergovernmental Panel on Climate Change (IPCC)…”

Drafts Of COP26 Agreement Released: Details, links and headlines courtesy of Climate Nexus: “Early drafts of an agreement out of COP26 acknowledge the world should aim to limit warming to 1.5°C (2.7°F) and reference phasing out fossil fuels for the first time. The drafts also note “with regret” that wealthy nations have failed to make good on their promise to provide $100 billion annually in climate finance and include language about increasing finance targets in the future. They ask countries to come back in 2023 with stronger climate plans, something developing nations have been pushing for. These documents, which will eventually form the outcomes of the conference, were released early Wednesday morning, local time. Experts said the drafts are weak on providing compensation for irreparable loss and damage and more money to developing countries for adapting to climate impacts. The US and European Union have been accused of standing on the sidelines as countries like Saudi Arabia and Russia have pushed for lower ambition. Delegates will continue negotiating details over the coming days, with a final agreement officially due Friday night. But, if history is a guide, it could come hours (or days) later.” (BBC, Bloomberg $, AP, Washington Post $, CNN, Axios, Reuters, The Guardian, Newsweek)

Heaviest Rains Trending Wetter. Climate Central has details: “Climate Central found that 72% (178) of 246 locations analyzed have seen an increase in the amount of rain falling on their annual wettest day since 1950. Locations along the Gulf Coast and Mid-Atlantic have experienced the greatest increase by volume in their heaviest rainfall events. Houston tops the list with 2.8 additional inches on its annual wettest day compared to 1950, or an 83% increase. This is followed by Greenville, N.C., Pensacola, Fla., Hattiesburg, Miss. and Baton Rouge, La. These trends are consistent with long-term increases in the amount of precipitation falling in the heaviest one percent of downpours across the country, with the largest increases in the northeastern U.S. For 15% of 2568 stations evaluated across the contiguous U.S., their wettest day of 2021 ranks in their top-ten annual wettest days on record…”

Climate Change Imperils Critical Infrastructure. TheHill outlines what is at stake: “…U.S. infrastructure is, at best, in mediocre condition, deteriorating and showing signs of increasing vulnerability. For example, more than 21,000 bridges are susceptible to overtopping or having their foundations undermined during extreme storm events. In addition, more than 12 million residential properties, 900,000 commercial properties and 71,000 social infrastructure properties are at risk from flooding. But the highest risks are to the glue that connects our nation and keeps its people safe and healthy, its roads and airports, fire and police stations, hospitals, as well as drinking water and wastewater treatment systems. Roughly one-quarter of that critical infrastructure, 36,000 facilities, and nearly 2 million miles of road are at risk of becoming inoperable today. That doesn’t even account for the burdens on disadvantaged communities without any drinking water delivery or wastewater treatment infrastructure at all…”

New High Resolution Climate Model Predicts More Extreme Weather Events in the Future. CNN.com has a summary of new research: “…Researchers found through the high-resolution model that impacts of extreme rainfall could be more frequent and severe due to climate change than had previously been thought. The study comes as global leaders convene in Glasgow, Scotland, for COP26 to discuss strategies for curbing greenhouse gas emissions in hopes of slowing human-induced warming, which is increasing at an alarming rate. The study narrows in on the COP26’s host city, as well as London. It shows the number of days with 30 mm of rain or more per hour (when the United Kingdom issues flash flood warnings) is 3.5 times more likely in Glasgow by the year 2070 when compared to 1990, if warming runs unchecked and the global temperature reaches 3 degrees Celsius above pre-industrial levels, and 2.5 times more likely in London…”

Why are Republicans Now Loving the Sweet Sound of Electric Vehicles? Here’s an excerpt from a New York Times Op-Ed (paywall) that explains the apparent (grudging) change of heart: “…Nevertheless, elected officials in these red states are bending over backward to court a manufacturing company that’s staking its future on electric vehicles. Last month, Mr. Lee called a special session of the Tennessee General Assembly to approve a $900 million incentive package for site development, construction, and work force training, among other expenses. It was the largest such outlay in state history. Despite the costs, legislators were giddy about the deal with Ford. “It represents a metamorphic moment,” Page Walley, a Republican state senator from Bolivar, said. “This is our crossing the Jordan.” Why would red-state politicians spend so much money to help fund the “most environmentally-friendly project in the country,” as Mr. Walley put it? One word: jobs...”

The EPA’s New Climate Rule Avoids an Old Mistake. A post at Slate.com explains: “…But the new methane rule goes beyond merely undoing the damage of the Trump years. The proposal is broader than its Obama-era predecessors, and once finalized, will apply to hundreds of thousands of previously unregulated emission sources, like wells, storage tanks, and compressor stations. That is because unlike the prior standards, Biden’s rule will cover equipment of all ages. EPA thus avoids a key conceptual error that has undercut agency initiatives for over five decades under administrations of both parties: The old rules regulated only new facilities, while exempting older ones from emission limits. In contrast, Biden’s rule covers new and old emitters alike…”

Loss of Glaciers Will Hurt Tourism, Power Supplies and More. Associated Press has the story; here’s a clip: “From the southern border of Germany to the highest peaks in Africa, glaciers around the world have served as moneymaking tourist attractions, natural climate records for scientists and beacons of beliefs for indigenous groups. With many glaciers rapidly melting because of climate change, the disappearance of the ice sheets is sure to deal a blow to countries and communities that have relied on them for generations — to make electricity, to draw visitors and to uphold ancient spiritual traditions. The ice masses that formed over millennia from compacted snow have been melting since around the time of the Industrial Revolution, a process that has accelerated in recent years...”